Maggie Rayner was 10 or 11 years old when her church in Richmond received visitors she will never forget. Her family belonged to a mainstream Church of Jesus Christ of Latter-day Saints, commonly called Mormons.
Nov 23, 2016 12:47 PM By: Pat Johnson 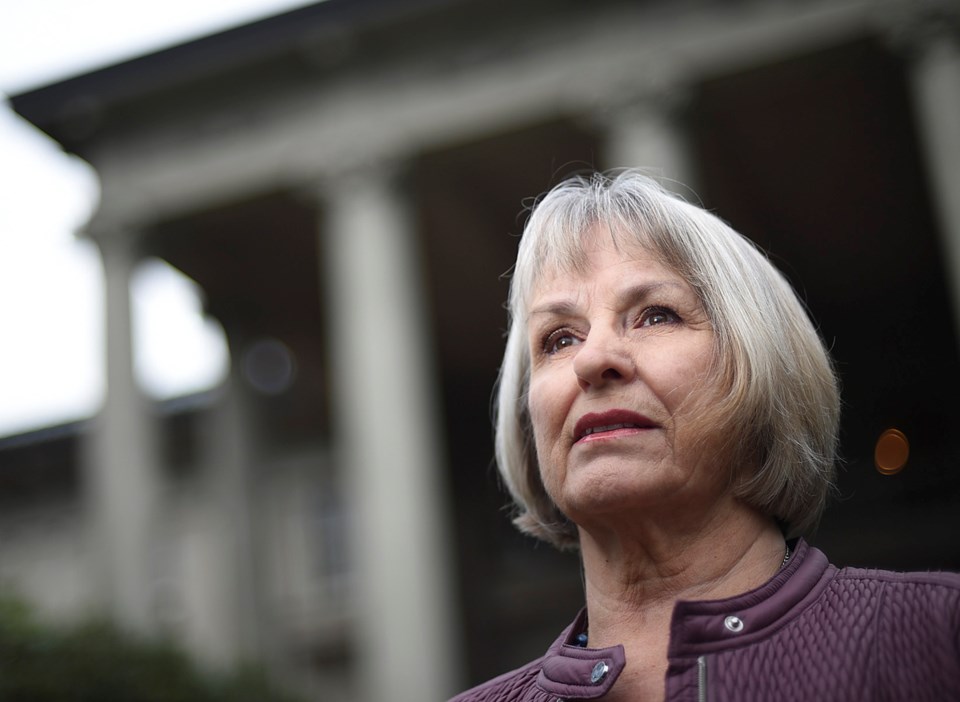 Maggie Rayner is the keynote speaker at Vancouver’s commemoration of the National Day Of Remembrance and Action On Violence Against Women. The event takes place Dec. 6 at Hycroft Manor. photo Dan Toulgoet

Maggie Rayner was 10 or 11 years old when her church in Richmond received visitors she will never forget. Her family belonged to a mainstream Church of Jesus Christ of Latter-day Saints, commonly called Mormons. The guests, from the village of Bountiful in the east Kootenays, were part of a breakaway sect.

Rayner’s life could have taken a fateful turn during that time and she is grateful that a single decision by her father probably saved her from a life starkly different from the one she has led.

The visitors from Bountiful were looking to recruit members to their community. They were particularly interested in Rayner’s family because, in addition to Maggie, there were also two older sisters. “They targeted my older sister when she was 16,” Rayner says. “An older man — he looked to me to be as old as a grandfather at the time — was trying to court her.”

The Mormons of Bountiful do not follow the official Church of Jesus Christ of Latter-day Saints’ doctrine on polygamy. The schism goes back to the late 19th century, when Mormons who had migrated to the Salt Lake City area hoped that the federal government in Washington would grant Utah statehood, believing that this would provide the largely Mormon population a degree of independence over their own affairs. The federal government balked at the practice of polygamy and, in a compromise, the church officially banned the practice. But among groups like those in

Bountiful and similar ones in the western United States, some men still take more than one wife.

While Canadians may be increasingly accustomed to a live-and-let-live attitude around sexuality, subscribing to Pierre Trudeau’s assertion that the state has no place in the bedrooms of the nation, polygamy as it is practised in Bountiful is something quite specific.

As Daphne Bramham has written extensively in the Vancouver Sun and in a related book, the issue goes beyond individual choice and into dark subjects of abuse, the “marriage” of underage girls to men decades older than themselves and the exploitation of hundreds of oppressed followers by religious leaders who amass fortunes while their congregants/family members live lives of isolation, ignorance and poverty.

This was the life that could have been Rayner’s.

“The Bountiful polygamists came down to our congregation in Richmond and were trying to basically poach families with young girls,” she recalls. “My family, with three girls, was one that they set out to woo. My mother lived in fear that my father would want to take up polygamy.”

Her father, to Rayner’s great relief, nixed the idea of his 16-year-old daughter marrying the grandfatherly visitor.

“My father said no,” she says. “I was very lucky that he did or it would have followed that all three of us girls would now be married to polygamists.”

Rayner never rejected Mormonism because she never accepted it in the first place, she says. Alone among seven siblings, she — the middle child — never accepted what her church was offering. She spent most of Sunday in church, then there were evening meetings throughout the week, and Maggie played the piano for the under-12 class.

“At the same time, I had never adopted the doctrine of the church,” she says. “Why, I don’t know. I’m the only one of the seven children that ever questioned it. Mormons are baptized at eight and

I knew at eight that I was a fraud, that I did not believe any of the Mormon principles. Black patent shoes and white bobby socks to celebrate baptism day were more important to me than the baptism. So I had never had a belief in the doctrine.”

At age 18, Rayner broke from her church and, by necessary extension, her family. She made a life for herself, found a room in a shared house with other young women and began a career. One day, she saw a notice for a discussion about polygamy at SFU’s downtown campus. She headed over, assuming the theatre would be packed with people ready to discuss what Rayner considers a subject that should be of wide concern.

“There were maybe five people there,” she remembers. “I was shocked.”

Despite the poor turnout, Rayner met a core group who shared her concerns, including Debbie Palmer, who had escaped Bountiful and whose experiences were featured in the film Leaving Bountiful, and on CBC’s The Fifth Estate.

Rayner went on to write the book In Polygamy’s Shadow and will be the keynote speaker at the 13th annual luncheon marking the National Day Of Remembrance and Action On Violence Against Women, taking place Dec. 6 at Hycroft. She is proud to call herself an activist on behalf of women trying to escape religious oppression.

At its root, she says, polygamy as it is practised in Bountiful treats women like possessions.

“The very, very bottom line is an unequal balance of power between male and female and women being treated as commodities and their children even more so,” she says. “In a closed society, with no opportunity to develop any personhood, it just perpetuates itself. The women are taught in the belief system that to get into Mormon heaven and to have eternal salvation, the women are required to do this. This is what they believe and this is what they teach their children. So unless they submit and are obedient to this doctrine, their eternal salvation is on the line.”