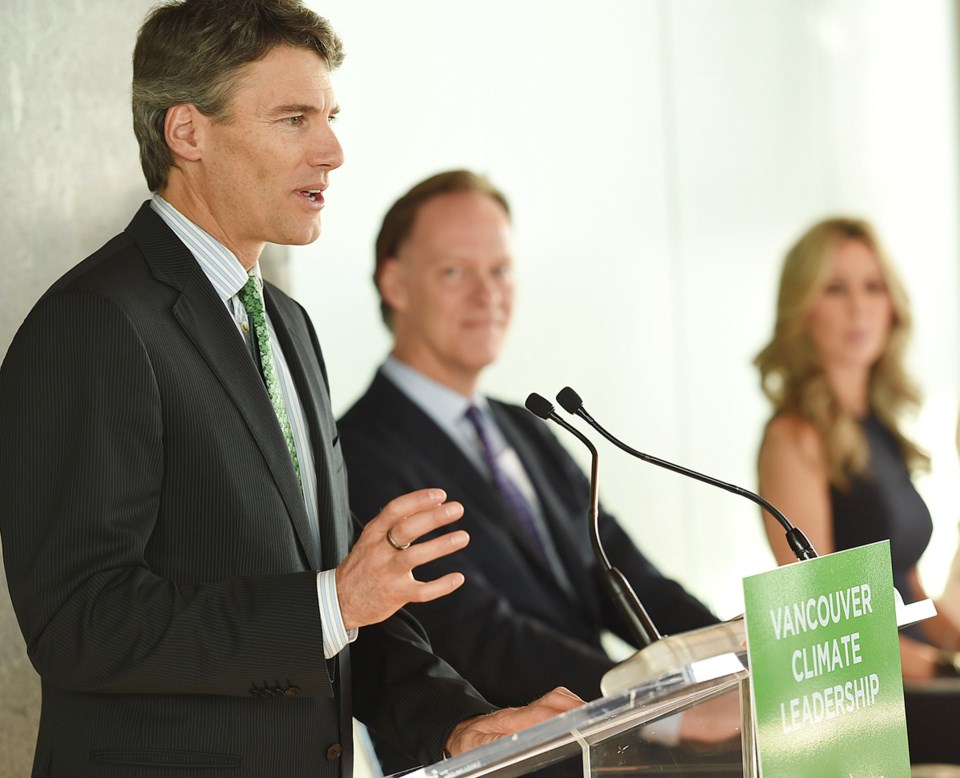 Mayor Gregor Robertson and Ian McKay, CEO of the Vancouver Economic Commission, spent part of Thursday outlining the purpose of their trip to next week's international conference on climate change in Paris. Photo Dan Toulgoet

As president and CEO of a Vancouver venture capital firm that specializes in innovation and alternative energy, Dr. Wal van Lierop knows a thing or two about money.

The head of Chrysalix also knows about the so-called green economy that produces jobs least harmful to the environment.

So when the Courier asked Mayor Gregor Robertson at a news conference Thursday how much his trip next week to the Paris climate change conference will cost taxpayers, van Lierop couldn't contain himself.

Seated among guests and media on the top floor of the new Telus Garden building on Georgia Street, where the mayor kicked off his trip to the 21st Conference of the Parties to the United Nations Framework on Climate Change, Lierop interrupted the question and answer period of the event.

"Wal, you're not media," said the mayor as he allowed van Lierop to speak.

He told Robertson to provide some context to the costs, noting he had a unique opportunity to tell delegates in Paris next week about the investment opportunities in Vancouver for green jobs and how the city had already attracted profitable businesses.

"Many people in the world need to be told of the facts to really participate actively in this pattern to a carbon-free society," van Lierop told the mayor, who responded from a lectern: "I couldn't have said it better myself."

In an interview after the news conference, van Lierop elaborated on his message to Robertson and defended the cost to send a Vancouver delegation to Paris. van Lierop will not attend the conference.

"There is a war for talents, there is a war for the best green jobs, so to have him out there showing what we are doing, what our regulations are, is very important," he said. "So a few dollars to fly around the world, it's Mickey Mouse in the grand scheme of what the impact can be."

Added van Lierop: "We should not be penny wise and pound foolish."

The cost for Robertson, his chief of staff Mike Magee, city climate policy manager Malcolm Shield and intergovernmental affairs director Marnie McGregor to participate in the Paris talks is about $15,000, according to the mayor, who said some of his and Magee's costs are offset by the C40 Cities organization.

That $15,000 can be added to the $30,000 the four-person delegation from the Vancouver Economic Commission has budgeted for its trip to Paris. The commission receives the majority of its funding from the City of Vancouver. (Vision Coun. Raymond Louie is also in Paris but in his capacity as president of the Federation of Canadian Municipalities, which is picking up his tab.)

"Ours is more because we don't have the political profile where people are going to pay for us," said Ian McKay, the CEO of the commission.

McKay said he and his staff will participate in workshops and he will sit on a couple of panels and conduct presentations, as will the mayor, who will tell delegates about Vancouver's goal to be the greenest city in the world by 2020 and have the city completely powered by renewable energy before 2050.

"The appetite for what we're doing is pretty significant," he said, noting the commission measures success on how much talent, the number of companies and venture capital it attracts to Vancouver.

Coincidentally, McKay said, the commission was to announce Friday the launch of a Chinese company opening a clean technology innovation centre in Vancouver.

"This is really, really remarkable," he said of a year-long discussion to attract Hanhai Zhiye investment group to Vancouver.

McKay noted it's hard work to attract clean technology companies but participating in conferences like the Paris event helps build the city's brand as a leading market for investment and green jobs.

"I guarantee you people aren't waking up in China or Copenhagen or New York and Googling, 'Geez, how cool is Vancouver's clean tech sector.' We've got to go put it in their face."

Statistics posted on the City of Vancouver's website show a steady increase in green and local food jobs from 16,700 in 2010 to 19,900 in 2013. The Vancouver Economic Commission defines a "green job" based on a framework established by the United Nations Environment Program. Such a job would focus on activities that restore or preserve environmental quality, reduce energy, materials and water consumption, "decarbonize" the economy and minimize or avoid waste and pollution. Local food jobs refer to all food production, retailing or processing of food in Vancouver that originated in British Columbia.

"We have the political will in this city, we have the resources, the technology, the creativity and the innovation to do what needs to be done to go green in this city," Robertson said in his speech.

Asked about the amount of carbon all those jets produced during his trips to talk climate change, Robertson said it was "a necessary evil."

"Certainly, I'd prefer to not be flying all over the planet to spread the word about Vancouver's green leadership but that's the most effective way that I can carry the message," said the mayor, who also launched a climate change pledge Thursday that residents can sign up for on the city's website.