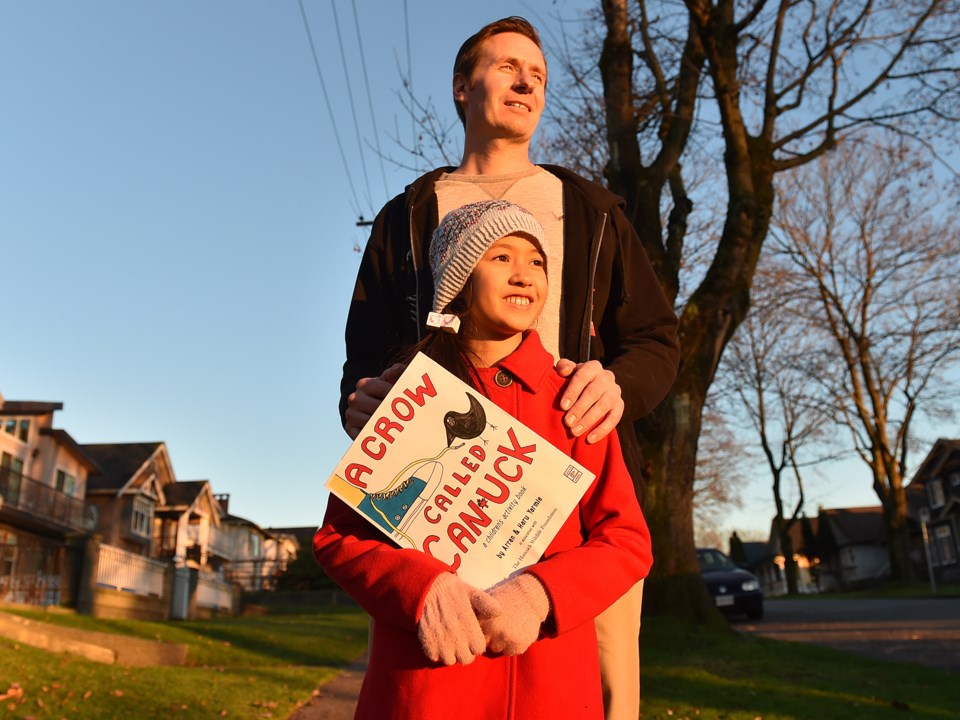 Arran Yarmie and his daughter Haru, 9, spent a year and a half working on A Crow Called Canuck: A Children’s Activity Book. Photo Dan Toulgoet

There are T-shirts, legions of fans and even a short documentary, and now Canuck the crow is the star of his very own children’s book.

She had even started talking about getting a book published.

“She kept saying ‘I’d like to get a book published. I want to publish a book. Do you think we could get a book published?’” So then we came up with the idea of Canuck the crow because he’s such a popular bird and we both had some really memorable encounters with Canuck, so we thought it would be a great idea.”

The Yarmies live in East Vancouver not far from Canuck’s neighbourhood and about a year and a half ago Haru had a run in with Vancouver’s most famous feathered friend during a baseball game at the Hastings Community Little League field.

“He came and took my ball while I was playing catch… and then he untied my friend’s shoelace a couple of times,” she says.

Arran had a different kind of encounter with Canuck around that same time, but it was one that inspired the idea to create a children’s book. He was riding home from work and saw Canuck and about 10 other crows gathered on a grassy area in the neighbourhood, and he stopped for a moment to take in the scene.

“I was just on the side of the road on my bike observing them flip over leaves with their beaks and pick at the grass,” Arran said. “It was so quiet, serene and very relaxing to just observe Canuck and his crow friends doing what crows do.”

The scene was quickly disturbed when a group of children running along the stretch of grass intentionally ran up to the crows, scaring the birds away.

“I asked them ‘Why did you do that?’” said Arran, who teaches English at Burnaby North secondary school. “They just looked at me with very confused expressions as if to say ‘Why wouldn't we do that?’

“That experience really made me want write the book with Haru to spread the message to kids and adults that it is important to respect urban wildlife,” he said. “I feel really strongly that animals we encounter in our daily lives in the city have as much right to live their lives peacefully.”

And with that father and daughter got to work writing, and illustrating, A Crow Called Canuck: A Children’s Activity Book, which chronicles Canuck’s early life and rise to fame, as well as highlighting some of the challenges faced by urban wildlife.

In the book Canuck flies around the region visiting other animals. He flies to North Vancouver and talks to the black bears, who tell him they have to look for food in garbage cans because the forest is disappearing and fewer salmon are returning to Capilano River. He flies to Delta and talks to the bald eagles, who tell Canuck about how they are losing trees to nest in because so many are being cut down to make way for houses.

“We wanted it to be about Canuck but also more than that we wanted a book to also talk about the other issues that urban wildlife face…” Arran said. “We wanted to give them a voice too and raise awareness about some of the problems they’re facing as the population continues to grow in the Lower Mainland.”

In addition to the story, the book also includes several pages with a crossword puzzle, word search and other games and activities.

Arran said the book aims to not only entertain but to also education youngsters about the importance of peacefully co-existing with urban wildlife. They pitched the book to several publishers, including Hancock House Publishers, which responded right away, he said.

The publishing house largely publishes non-fiction regional works with a focus on wildlife, natural history, folklore, and Indigenous art and culture. Arran and Haru also decided to donate any profits from the book to the Hancock Wildlife Foundation.

“As part of our contract we could have just kept the profits but, you know, it’s a story about Canuck and about wildlife and we really wanted to give back,” he said.

A Crow Called Canuck will be available starting Dec. 17 and can currently be ordered online at www.hancockhouse.com/products/a-crow-called-canuck. Arran said it should also be available to order on Amazon started Dec. 17.

“We’re hoping to get it into some local book stores and things like that, and of course we’ll donate some copies to the library,” he said.