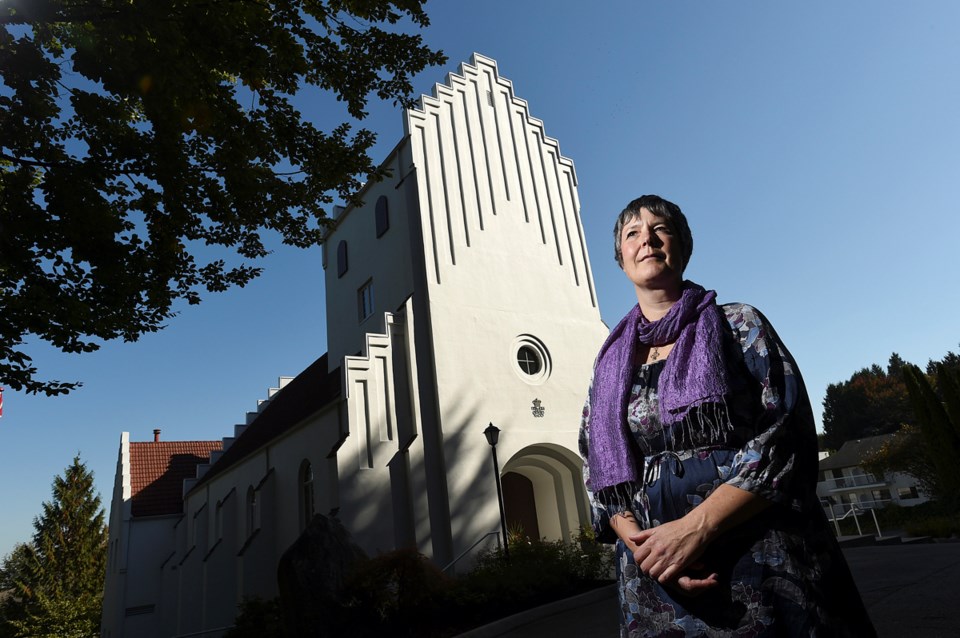 It’s no surprise that Pastor Birgitte Saltorp has felt right at home since she arrived in Vancouver from Denmark three years ago. The Danes are the Canadians of Europe. At least, that’s what one person told her anyway.

“I never heard that comparison before but it works for me,” she says.

It seems applicable when Saltorp talks about her congregation’s approach to religion. Saltorp ministers at the Danish Lutheran Church of Vancouver. It’s in Burnaby, actually, but it started out in 1937 at Fraser and 19th in East Van.

One parallel that struck me was when Saltorp said Danes are quite private about their religion, something I find true of Canadians. A few years ago I was at the wedding of my neighbours and I asked a tablemate how she knew the couple. “We go to the same church,” she said, and it surprised me that my two-doors-down friends went to church at all. We never discussed it.

“A lot of Danes are very private about their faith, so as a newcomer comes into the church, they will not be in your face asking you, Do you love Jesus?” Saltorp says. “You get a level of privacy as you come in as a newcomer. People will say hello and some will talk more than that to you. But we’re not going to examine you on your faith.”

The church has two services a month in Danish, but the minister tends to use the language much more in spiritual care of her congregation, many of whom arrived here in a big influx after the Second World War. Those immigrants strengthened a small community that had arrived in the late 19th century. In 1984, the congregation moved to its current location, adjacent to the Dania Home, a care facility begun decades ago by the Danish community.

As far as theology goes, Saltorp says her brand of Lutheranism reflects the Scandinavian laid-back attitude. It’s one of the reasons the church attracts quite a few non-Danes as well, she says.

“People come in and they say, ‘I can breathe here,’” she says. The English services, she adds, attract about 70 people on average, the Danish services about 50.

The first thing she says when asked about the church’s beliefs is “We definitely believe in God.” This may seem odd from a Christian minister, but a decade or so ago a Danish pastor who didn’t believe in God made global headlines. (The United Church of Canada is dealing with the same issue right now with a Toronto minister.) In fact, Saltorp says, the overseas church might be a tad more conservative than the one in the home country because it is necessary from a cultural preservation standpoint to hold to some values that connect to the homeland.

The 46,000 British Columbians who identify as Danish have managed to sustain not just this church but another smaller one in Surrey. By contrast, all Swedish and Norwegian churches in the area have folded or become exclusively English-language congregations.

That means some non-Danish Scandinavians join with Saltorp’s church a few times a year, especially at Christmas. The Danish church, she says, has in recent decades adopted the Swedish tradition of Lucia, the candlelit procession of singing children marking St. Lucy’s Day. Scandinavians also show up for the Christmas workshop when they make traditional braided hearts and other tree decorations as well as cookies and seasonal treats that most northern Europeans know.

It won’t be long now before the rather lengthy Danish Christmas season begins and friends will gather for countless traditional luncheons, starting as early as November and going until January.

Old traditions also animate Lent, the six-week period leading up to Easter. In particular, Mardi Gras — the last big shindig before the solemnity and fasting of the Lenten period — is a fun time especially for kids. A wooden barrel is filled with candy and beaten with baseball bats or the like, piñata-style, until the contents spill out and are snatched up by the young.

Do they have to gobble it all down immediately before Lent begins, I ask.
Saltorp laughs.