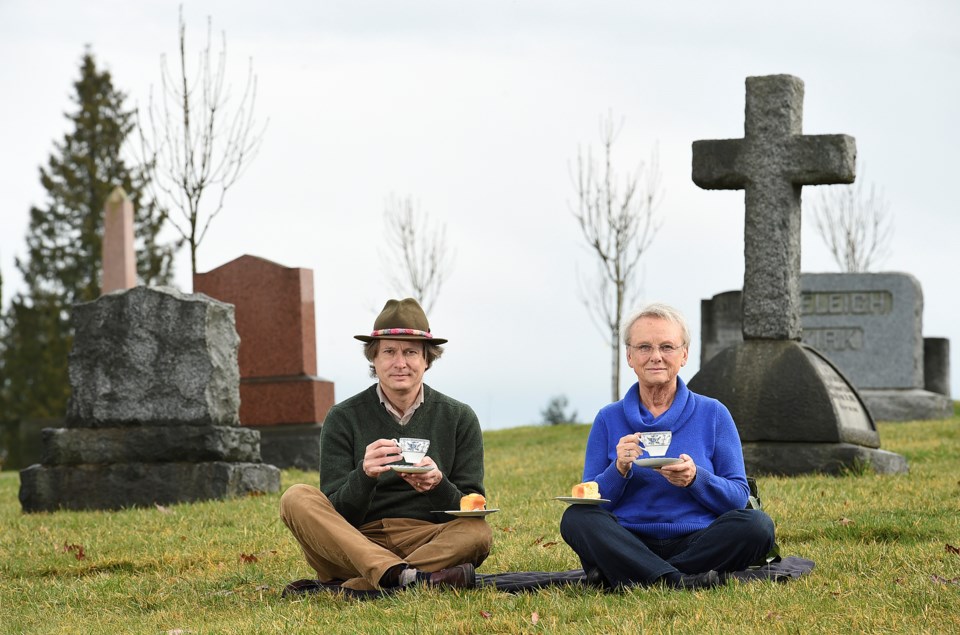 Tom Esakin and Anneke Rees are co-facilitating several Death Cafés in the next two months. According to Esakin, “Life is better lived when we connect it with food and drink and so if we are going to discuss death, what better way to do it than over food and drink?” Photo Dan Toulgoet

How about a spot of tea, a bit of cake and a chat about death?

Sounds normal enough until that last bit. Death is something we talk about either as an abstract far-off concept or, conversely, during a time of crisis. We rarely take the time to unpack the issues around death in a casual, thoughtful, deliberate way… with tea and cake.

This is the idea behind Death Café, a global phenomenon now alive in Vancouver. Anneke Rees and Tom Esakin, who met at a 50th birthday party and ended up engrossed in a conversation about death, are co-facilitating several Death Cafés in the next two months. While they insist they are there to encourage others to speak about the topic, both have extensive experience in the non-theoretical aspects of death. Among many other roles, Rees was a volunteer in palliative care at St. Paul’s Hospital at the height of the AIDS epidemic. Esakin is an interfaith spiritual director, which seems something like a chaplain-at-large, and has been involved in what is variously called palliative journeying, death midwifery or being a death vigilant.

“I’ve walked a number of family members and friends through death,” he says. “To understand that you are going to die, not just theoretically but to actually integrate it into your being, one relates to life very differently. You start to realize that life is a gift and is not something to be taken for granted. Life begins to be cherished in much deeper ways than when we just have this abstract concept that we’re going to die at some future date.”

Originating in Europe and spreading rapidly in North America, there have been nearly 3,000 Death Cafés in the last five years. Because the direction of each event is set by attendees, no two are the same.

“It could be anything,” Rees says of the topic range. “It could be… I’m really curious about what happens when somebody dies, I’ve never seen it. It could be existential questions around what happens after you die. Is there an afterlife?” Perhaps a discussion on assisted suicide, which is au courant, or anything else people want to discuss.

This is not a support group or a bereavement group, though.

“We are not clinical,” she says. “We make that very clear.”

The next café is March 15 at Banyen Books and Sound (all cafés worldwide are listed at DeathCafe.com) and there are two more in April. However, it is not a series — in fact, Rees and Esakin are not encouraging people to attend more than one as the international guidelines set out by the “social franchise” insist that the groups not exceed 20 people and they hope to include as many individuals as possible. The rules also insist on cake.

It is a principle of Death Café, Esakin says, that “life is better lived when we connect it with food and drink and so if we are going to discuss death, what better way to do it than over food and drink?”

Rees acknowledges she confronts skepticism about the whole idea.

“Some people seem to have a guttural response to it,” Esakin admits. “I sent an email out to a group of my friends and one friend came back and said, ‘You’re decades away from death.’ I emailed back and said you’d be surprised the paradox of life is when you explore your death, you live more deeply. It’s not about you’re going to die tomorrow.”

Rees agrees death is something people need to incorporate more into daily life.

“Our society is not really good about dealing with death,” she says. “We shuffle people off and have someone else to look after that piece. As people suddenly face these issues, they often have no clue what to do, what to say. Somebody dies and a lot of people don’t even know what to say to somebody, which is why the sympathy card business is such a flourishing business.”

She adds that Death Cafés are about “just making people aware that it’s a subject that you can’t avoid.”

Death and afterlife are all wrapped up in religious beliefs and customs, and this is an area Esakin and Rees are not afraid of negotiating. Esakin in particular has training in diverse religious practices and notes that national and regional cultures also impact the discussion.

“Religion plays a great role in how one perceives it but culture does as well,” he says. “Catholicism is large around the world, obviously, but how you relate to death in Catholicism depends on what part of the world you’re in.”

Esakin sums up the approach he and Rees take to the topic.

“We are two souls who are comfortable having a conversation about death because of our lives’ experiences,” he says. “We, in a sense, want to provide a safe, welcome, comfortable, confidential environment where people can also feel welcome to talk about that thing that will affect all humans.”