Finding help for the helpers 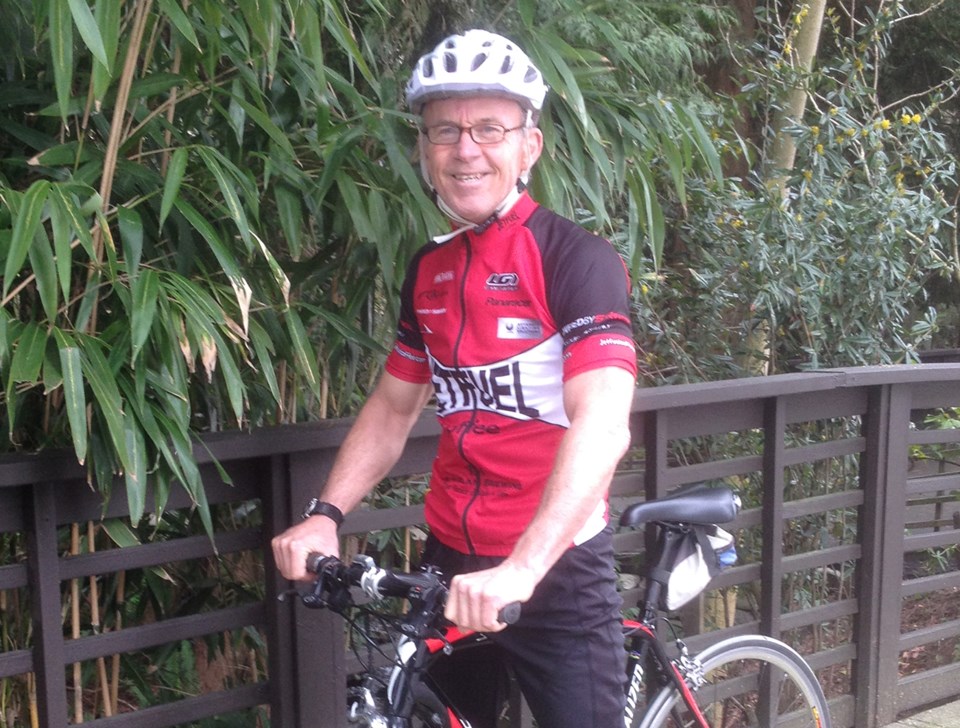 Retired Vancouver firefighter Colin Thompson is riding his bike to a memorial for fallen firefighters in Colorado Springs to raise money for an online therapy program for people with PTSD.

Flashbacks that keep looping in an endless parade of memories best forgotten. Paralyzing anxiety. The black cloud of depression that leads to suicidal thoughts, self-medicating behaviour, family strife, feelings of helplessness and isolation. Death, at the extreme.

Post-traumatic stress disorder is a devastating affliction that, left untreated, can have tragic results.

PTSD is much on the minds of firefighters throughout the Lower Mainland. On March 30, a funeral was held for a Surrey firefighter who had suffered from PTSD.

It is estimated that more than 30 per cent of firefighters — as opposed to eight per cent of the general public — have PTSD, something that, until recently, they have not liked to talk about.

“In the fire service, we’re ‘manly men’ and ‘tough women’ and we largely keep our feelings inside,” says Vancouver firefighter Nils Gorseth, the executive director of the Vancouver Firefighters’ Charitable Society. “We have thought we’re not the ones who need help; we’re the ones who help other people.”

Helping people exposes all first responders — firefighters, police and paramedics — to horrific experiences. While others can look away, they’re the ones who retrieve the bodies from burned-out buildings, extricate people from mangled cars and respond to suicides, murders and domestic abuse calls. Sometimes it’s not the actual event they have trouble coping with; it’s the cumulative after-effect of dealing with so much tragedy.

But, as overwhelming as the symptoms feel, there is a cure.

“The real tragedy is that we are not reaching everyone who would benefit from the treatments that work,” says Dr. Christine Korol, a Vancouver psychologist who’s spearheading an innovative project that will make a proven PTSD therapy program easily accessible online.

“Not everyone [who has suffered a trauma] goes on to have PTSD,” says Dr. Korol. “Many recover from a single event spontaneously. However, the more events you have in your life — and first responders see trauma after trauma — the risk of getting PTSD increases. Eventually, anyone is vulnerable.”

The Kelty Online Therapy Service at Vancouver Coastal Health is named in honour of the project’s founding donor, the Kelty Patrick Dennehy Foundation, which has raised $7 million for mental health projects since the Vancouver teenager took his own life in 2001. It will use video, animation, and interactive tools that anyone can access at any time, choosing from topics such as depression, anxiety, pain, grief, panic, insomnia and addiction.

When there’s a referral from a doctor, psychologist or therapist, they also get the support of a certified psychotherapist.

“Self-help is like trying to learn judo from a book,” Dr. Korol says of the program’s prime effectiveness when a therapist is involved. “The therapist guides you through it.”

The Kelty service is based on a cognitive behaviour treatment program that has an 87 per cent success rate in helping people recover from PTSD. It will cost $70,000 to get the program up and running; additional funding will be necessary to ensure that there are enough therapists available for everyone who is referred to higher care through the program. Currently, no funding is in place for a first responder-specific PTSD module with focused content, which is important because of the intensity of their experiences.

Colin Thompson is a retired Vancouver firefighter. Last September, while attending the Fallen Firefighters Memorial in Colorado Springs as part of the Vancouver firefighter union’s honour guard, he vowed to do something to make sure that every first responder can get the counselling he or she needs. This August, he’s going to ride his bike the 2,000 kilometres from Vancouver to the Colorado memorial in hopes of raising at least $10,000 for the Kelty project’s PTSD module. (In the first 24 hours, it garnered more than $1,600 in donations.)

“Fortunately, at this point in my life I seem to have dealt [with stress] OK but I’ve worked with others who were not so lucky,” he says. “Where do we go when we need help? Who do we reach for and what services are available for us?”

That’s the $70,000 question. While peer-based critical incident stress management programs exist to attempt to defuse critical incident stressors before they lead to PTSD, this amounts to necessary “first-aid” for mental trauma, says Gorseth. “Surgery,” analogous to professional ongoing care provided by mental health professionals, is elusive. There is a solution in the Kelty PTSD Program.

Gorseth thinks first responders will respond to Dr. Korol’s approach for five reasons: it can be customized to address first responders’ unique experiences; initially, it can be done remotely from home or work; it’s private, which may help to drive participation from the stoic first responder community, and; first responders, who often work five days on, three days off, can fit it around their timetables.

The VFCS is committing itself to supporting the Kelty program to help all first responders in B.C., not just firefighters. “We are all in this together. Police, fire, ambulance — it makes no difference; we are a unique family, bound by our shared experiences,” says Gorseth.

Tax-deductible donations to Thompson’s FundAid campaign will flow directly to the VFCS’s commitment to supporting PTSD treatment. Donations can be made at FundAid.ca/PTSDfireride.