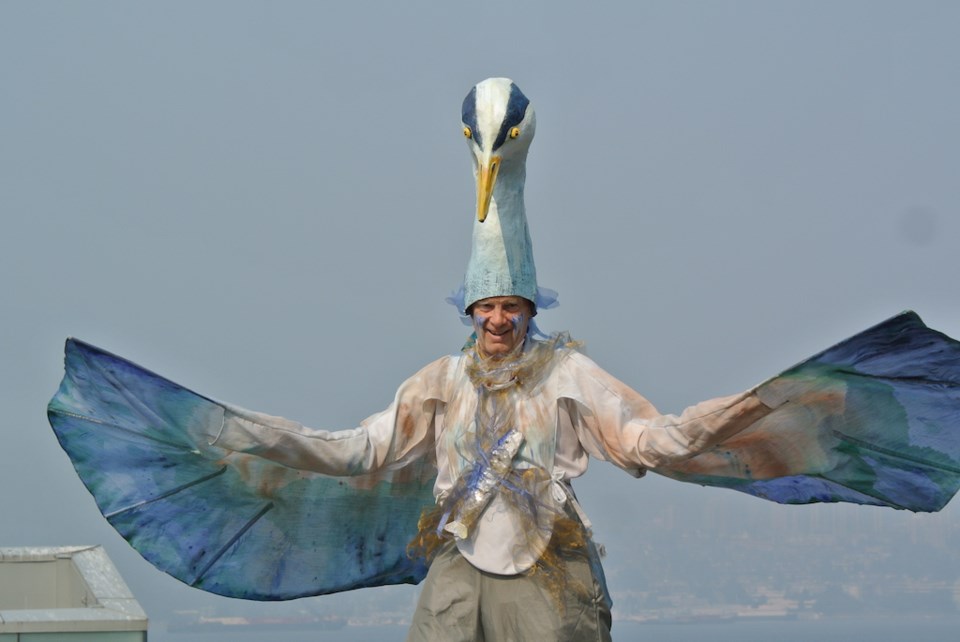 In highly detailed and fanciful costumes, a group of stilt-walking birds led the procession to Jack Poole Plaza for the opening of the Vancouver International Bird Festival, being held in conjunction with the 27th International Ornithological Congress.Martha Perkins

In all their beautiful, colourful and vibrant glory, a flock of magnificent birds pranced through Coal Harbour on Monday afternoon.

Held in conjunction with the prestigious 27th International Ornithological Congress meeting this week at the Vancouver Convention Centre, the festival’s flight of fancy took months of preparation by the stilt-walking (and often squawking) birds that paraded into Jack Poole Plaza on August 20.

“You can see why birds are icons of strength and beauty of cunning,” said congress participant Caroline Jackson-Houlston, a senior lecturer in English literature at Oxford Brookes University in Oxford.

“Nature doesn’t belong to anyone — it’s all of ours. And birds are a gateway to nature,” said Dr. Robert Butler, an ornithologist and author who is chair of the bird festival and one of its speakers. Whether you’re a scientist, a hipster birder or an artist, the festival will have events that will appeal to everyone, he said.

As the costumed birds folded their wings and rested their weary legs, the opening ceremony began with a performance of Gathering Flock, a fanfare written by Frederick Schipizky and performed by the Vancouver Symphony Brass Quintet.

The opening prayer was led by Xwalacktun, an artist of Squamish and Kwakwak’wakw ancestry. (He will be leading a carving workshop with his son this weekend.)

Some of the birds on parade were highlighted in the opening ceremonies, including Anna’s Hummingbird, which was chosen last year as Vancouver’s official bird.

When Councillor Heather Deal made a joking reference to Vancouver’s unofficial ambassador, Canuck the Crow, and the crows that flew over East Vancouver every night on their way to Burnaby, the person dressed as Anna’s Hummingbird had a quick response: “[It’s] because Vancouver is unaffordable.”

Also taking to the stage were the costumed representations of the five birds unveiled as new additions to the Birds of Canada stamp collection: black-capped chickadee, snowy owl Steller’s jay, Canada goose and whooping crane.

For a complete list of festival events, including tours throughout the Lower Mainland, go to vanbirdfest.com.

There is a gallery of more photos here.