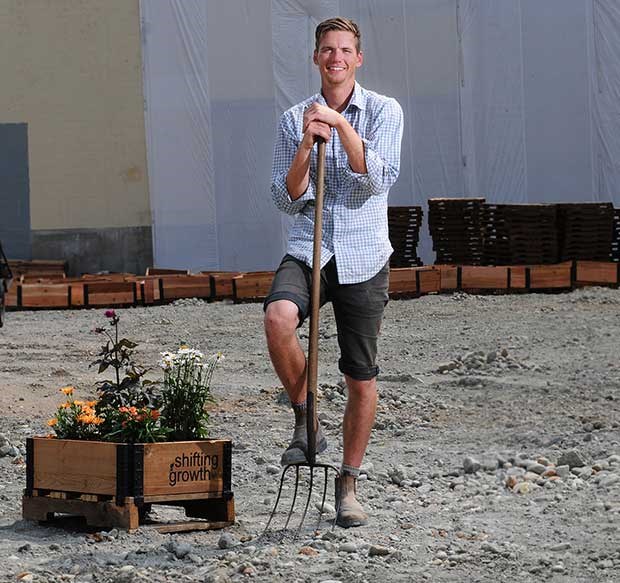 A prominent 22,000-square-foot empty lot slated for development on the 2500 block of East Hastings Street next to London Drugs in Hastings-Sunrise is being transformed into a temporary community garden until the real estate market shows more promise.

London Drugs owns the lot, which is located mid block on East Hastings between Kamloops and Penticton streets, as well as the property east of it to Penticton, which is home to a London Drugs store and a McDonald's restaurant.

London Drugs was planning to build a condominium project called Alba, but the company decided in May to delay the much-anticipated development.

Alba was to include three storeys of residential units above a commercial base. The street level portion of the building was to house a London Drugs and a restaurant on the corner where the McDonald's is currently situated. There was also to have been office space on the far west end of the development.

"Back in May, the decision was made to temporarily put the project on hold because, as you know, the real estate market in Vancouver is a bit challenged to put it mildly and we're a family-based company. Therefore, we try to make very prudent and conservative decisions," explained Donna Figueira, director of real estate for London Drugs group of companies.

"So that's what we decided that the market is not conducive to starting a real estate project at this point in time. Right now, we're looking at about a two-year wait. As we get there, well re-evaluate and see if that's the appropriate time or if it's time to wait a little longer."

The company turned its attention to what to do with the empty lot once the project was put on hold. Business contacts recommended Shifting Growth, a registered charity whose mission is to transform vacant, under-utilized lots into temporary community gardens.

"I was so impressed with their concept, their vision, that we thought this is perfect. We looked at a number of options and this one just seemed to fit so totally into this community that we entered into serious discussions with them and now we have an opening of the gardens [Aug. 10], so we're pretty excited about that," Figueira said.

Chris Reid, Shifting Growth's executive director, said it has a two-year deal with a 30-day removal clause, which is common in these types of agreements.

The Hastings garden, which is sponsored by London Drugs, is Shifting Growth's third in Vancouver one is at Dunbar and 40th another at Clark and 12th. A fourth is being planned for Commercial Drive.

Reid started Shifting Growth in 2011 after noting the high demand for community gardens, which often have waiting lists, and the number of high-profile vacant lots.

The Hastings North Temporary Community Garden will be simply designed and beds are being allocated on a first-come, first-served basis.

The draft plan is for 167 community beds, two community herb beds and three fruit trees. About 30 of the beds will be accessible beds for those with mobility issues or for children they'll be accessible from all sides.

"The goal is to create a welcoming, accessible community garden where anybody in the community can come, get a plot and just grow food we want to keep it really simple," Reid said. "All the other stuff associated with managing and [ensuring] the space is kept tidy is our responsibility as property managers."

The infrastructure is mobile so when development starts, the plots can be moved to another Shifting Growth site.

The grand opening will feature workshops, seed giveaways and the opportunity to sign up for garden beds if any are remaining. Beds are going quickly. As of Thursday morning, about 35 people had signed up in a two-day period.

Sign-up is free for this year, but there will be a $10 renewal fee for every year afterwards.