In 1976, nine cows went overboard under the Lions Gate Bridge 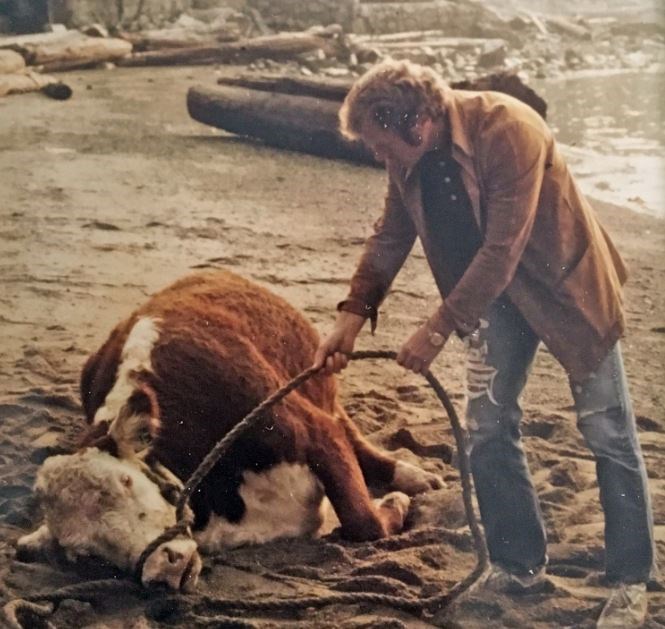 “It’s definitely the most bizarre incident that’s ever happened to me on the ocean.”

That’s what tugboat captain John Dolmage of North Vancouver, now 65, recently said about a high “steaks” story from Sept. 28, 1976, in the waters of Burrard Inlet. This same story has long been a favourite around our family dinner table, because of my father’s direct involvement.

In the early 1970s, my dad had entered into a partnership to purchase an old farm on Gambier Island in Howe Sound. The plan was to subdivide the property into lots to sell for cabins, and keep the main farm operational. They named it the rather quirky sounding Gambier Island Sea Ranch.

There was livestock on the farm, including cattle. At the end of each summer season, the cattle were loaded onto a barge and taken to market.

In the fall of 1976, Dolmage, then 23 years old, was captain of the tugboat Defender. He and his first mate, Colin Lester, were tasked with loading nine head of cattle onto a barge that they would tow from Gambier Island to the loading dock in North Vancouver.

My dad, then 36 years old, was surprised to see that the barge had no railings.

“The skipper assured me that they transported animals all the time and that the cows would settle down,” my dad recalled.

Dolmage concurred that there were no sides to his barge, but said he did have five-foot posts with rope between them, creating a barrier.

“That sort of situation was usually fine and the rumble of the tug’s engine calmed them right down,” said Dolmage.

The ocean was dead calm that night. They departed Gambier at high tide, roughly 7 p.m.

“By the time we rounded Point Atkinson, the cows were all lying down on the barge and everything was smooth,” remembered Dolmage.

Dad had already returned to our West Vancouver home. We watched the tug and barge pass by along the shore from our dining room window. All seemed well and my dad went to bed rest assured.

“When we got under Lion’s Gate Bridge, I asked my first mate Colin to see how the cows were doing. Well, he did a double take that I’ll never forget,” laughed Dolmage.

Dolmage looked back just in time to see the last cow take the plunge.

“In the moment, we didn’t know what the hell happened, but later on we figured that the overhead car noise from the bridge must have spooked them. So I followed protocol and called it in right away to the First Narrows Signal Station. I said, ‘I just lost a load of cows and they’re swimming around in the narrows.’”

There was a long pause. The marine operator responded with, “It sounded like you said cows. Could you repeat?”

“All of a sudden the radio came alive, because every ship in the harbour heard my call, eh?”

Soon the narrows under the bridge was filled with boats, including a Vancouver Police launch, all taking part in a never-seen-before-or-since rodeo at sea.

“There was this one really big Vancouver cop named Jack who grew up around cattle. He came aboard Defender and we managed to it get alongside two of the calves. This cop reached over and lifted the calves one by one right out of the water and onto the tug,” Dolmage said.

The rest of the full-grown herd was swimming off in different directions, so the responding crews fashioned their ropes as lassos. “That actually worked on a couple of the cows, and we towed them into shore alongside the tug,” said Dolmage. “But it was chaotic and getting darker. We were losing sight of the rest of the herd.”

A few of the cows swam for Stanley Park, where the mounted VPD were radioed. The police thundered down the hill on horseback for a Third Beach roundup. More cows were spotted by freighters and other boats throughout Burrard Inlet.

Dolmage and Lester didn’t give up on their cargo, and the tug’s radio crackled with sightings. They eventually found one that had been swimming for several hours. The heifer was heaving with fatigue, so Lester tied a life jacket around its neck and they towed it to the nearest beach.

Two others had come ashore at West Bay Beach in West Vancouver, which is where Dolmage next steered to find the steers. When he arrived at around midnight, West Van police were already on scene.

“The cops had just pulled this soaking cow out of the water, when a North Shore News reporter walked up and, out of the blue, took a flash photo right in the cow’s face,” Dolmage said. “Well, that spooked the cow, and it took off, thundering into someone’s yard.”

At 2 a.m., our home phone rang. “Mr. Garth Lawrence? This is Sergeant Aikenhead of the West Vancouver Police. We have two of your cows down on West Bay Beach and we’re going to have to shoot them to avoid further potential property damage.”

Dad jumped out of bed. You can imagine his shock: he assumed that his cows were safely to market. Instead they were running through people’s yards a few blocks away from our home. Dad managed to convince the police to instead call a veterinarian to tranquilize the cows, which they reluctantly agreed to. Dolmage was still on the scene.

“While we were waiting for the vet, we finally managed to catch the cows and calm them down. A cop had his arm around one cow’s neck and was stroking it when, I kid you not, the North Shore News photographer snuck up again and took another flash photo. This time that cow took off running down the beach with the cop still hanging on to its neck. The police were furious with that guy.”

The vet and my dad arrived at West Bay in the early morning hours. The vet successfully tranquilized the rampaging cows, but one 1,500-pounder dropped near the tide line, and no one could budge the bovine. Dad realized the only way to get it off the beach would be with another barge, hopefully before the tide came in.

By the time Captain Rick Byrne arrived from Gulf of Georgia towing, Dad and several WVPD members were waist-deep in the rising tide, holding the sleeping cow’s head above water so it wouldn’t drown. With a sheet of plywood slid under the cow, they somehow managed to load it aboard.

Further down the beach, Bellevue Avenue resident Barbara Brink, the founder and former CEO of Science World and member of the Order of Canada, woke up to the sound of dogs barking. “I looked out my bedroom window and there was a cow standing on the beach. It was a misty morning, so it looked like a surreal English painting,” Brink recollected. “I rubbed my eyes and wondered if I had eaten something hallucinogenic the night before.”

Of the nine cows that went overboard that night, seven were rescued. One was spotted by a Coast Guard cutter the following afternoon, still swimming, a full 16 hours after the herd had jumped ship. It was safely towed in to Sandy Cove in West Vancouver. Two cows drowned, their bodies eventually washing up on Bowen Island and Horseshoe Bay. The story made international news.

Dolmage received a thorough teasing, too. “Oh yeah, I heard about it. ‘MOO DAY, MOO DAY’ and all that. At 4 a.m., when I was finally heading in, another guy radioed me and asked, ‘Were those union cows!?’ There was a lot of labour trouble back then, so I replied, ‘They must have been, because they walked off!’”

There’s a 40th anniversary party for the Gambier Island Sea Ranch this Saturday, July 21. You can be sure they’ll be re-telling the cows-overboard story, with maybe a little extra bull thrown in for good measure. For all involved, it’s certainly proven to be an extremely memorable mooment.