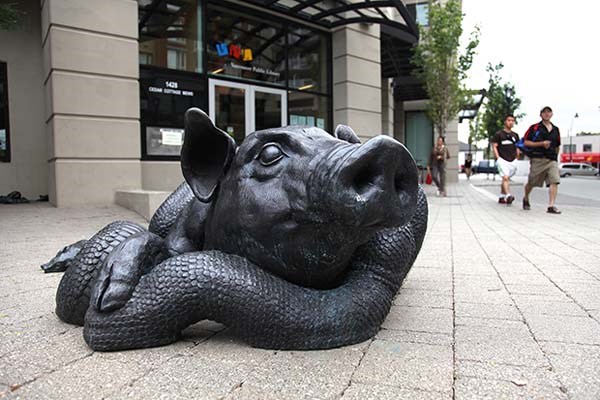 The Pig and Snake sculpture by artist Tom Dean can be found at King Edward Village at the corner of Kingsway and Clark.Jason Lang

Nearly five years after public art was installed outside the Kensington Library, a one-page handout explaining the sculptures that include a python wrapped around a sow continues to fly off an information table.

Reaction to the art has been extreme.

Tosa has had to explain to visitors to the library at Kingsway and Knight that the python isn’t killing the pig, and that Toronto-based artist Tom Dean’s Peaceable Kingdom sculptures are meant to explore paradise and mercy through a magical sculptural world of strange pairings where harmony exists but seems precarious.

The unusual pairings include a goat sticking its tongue in the ear of a fierce leopard that it rests on, and a boy snuggled and chatting with a bear. A vulture perched on a corner of the residential building shocked some condo residents when it appeared.

Tosa was surprised to see seven bronze rats near the entrance of the new Kensington library when it opened in 2008. “I saw the rats and I said, ‘Oh my goodness. The rats are following me from across the street,’” she said. “Then I found out it was the artist [I was speaking to.]”

She requested that the city’s public art program prepare an information sheet for the library to distribute. Tosa also asked for an explanatory plaque, which has not materialized.

The library had no say in the public art that was fixed outside its doors.

The city requires developers of large rezoning projects to contribute money to public art. The art must meet the city’s public art program criteria and is guided by a public art committee that includes representation by artists (two, in this case, hailed from the Kensington-Cedar Cottage area), curators, the project’s developer, architect and landscape architect. One resident is included for some projects but none was involved for King Edward Village because the condos weren’t occupied when the decisions were being made, according to city public art planner Karen Henry.

Patrick Bone, who’s lived in King Edward Village for a year and a half, described the sculptures as “strange” Wednesday afternoon. He thought the animals reflected the Chinese zodiac and the area’s Asian-Canadian population but was pleased to learn more about the works and that the city and developers support artists.

Tosa said children appear to love the sculptures, climbing on them and posing for photos. Others have described them as creepy.

“Good public art is something that’s bringing up conversation and discussion,” Tosa said. “And so I always say, in some ways, this one, most of all, has given us lots of discussion.”

Tosa suggested the neighbouring community should have been consulted in choosing the art but conceded broad consultation may have “softened” the choice. “[Dean’s] vision is really lovely for the Peaceable Kingdom,” Tosa said. “So that’s why I’m still hoping that some day they will definitely have some kind of plaque up there so that even when we’re not open it would be lovely for people to understand what the artist’s vision was in creating them.”

Henry said the city’s public art program is behind on progress in erecting signs about its public art but that the plaques are not very descriptive. “I agree that it would be great to do some kind of didactic or some brochure or something to give people access to that,” she added.

Dean wasn’t available for the story by the Courier’s print deadline.