Kensington-Cedar Cottage: The neighbourhood at a glance

Kensington-Cedar Cottage is a difficult neighbourhood to pin down.
Aug 15, 2013 5:53 PM By: Andrew Fleming, Staff Writer 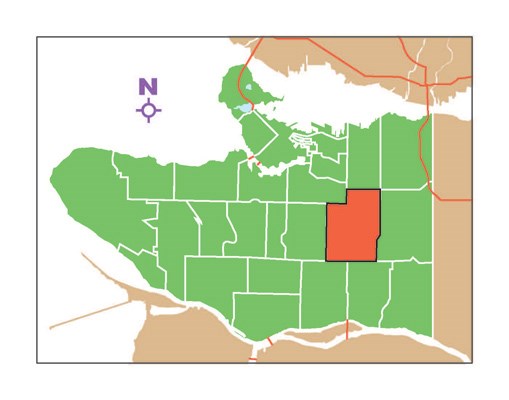 Kensington-Cedar Cottage is a difficult neighbourhood to pin down. Sprawling more than seven square kilometres between Fraser and Nanaimo streets and from East 41st Avenue to Broadway (or East 16th between Fraser and Clark), it has close to 50,000 people who call the 'hood home, more than nearby standalone cities such as Port Moody or West Vancouver.

One problem is that many people don't refer to it as Kensington-Cedar Cottage. Even on the City of Vancouver's new $3-million website, the area is often referred to simply as Kensington, which is generally considered the section south of Kingsway that was named for an historic British palace - which is why nearby streets have such regal names as Windsor, King Edward and Prince Albert. And, just as people often misidentify John Hendry Park as Trout Lake Park - Hendry was a former lumber baron who used the lake for his mill and his descendants later donated the land - most people refer to the Cedar Cottage district simply as "near Trout Lake." The area was originally named Cedar Cottage after a former train stop, itself named for, you guessed it, a nearby cedar cottage.

The entire region south of 15th Avenue was known as South Vancouver until its amalgamation into Vancouver in 1929, and the intersection near Kingsway and Commercial Street was a main hub due to its proximity to the lake.

The neighbourhood is now one of the most ethnically diverse in the city, with only a third of residents claiming English as their mother tongue. An equal number speak Chinese as their first language and it is also home to the Croatian Cultural Centre, the German community's ersatz Alpen Club and the annual Philippine Pinoy Fiesta parade, Latin Summer Fest and National Aboriginal Day celebrations.

Despite KCC's Britannic nomenclature, the culture it is now most closely associated with is Vietnamese. Two years ago, a group of local residents  - primarily first- and second-generation "boat people" who escaped by sea from the Vietnam War and settled nearby - successfully petitioned city council to rename a section of Kingsway Little Saigon.