Mindfulness stills the mind and body

Banyen Books event focuses on finding stillness amid hubbub of urban chaos
May 25, 2016 11:34 AM By: Pat Johnson 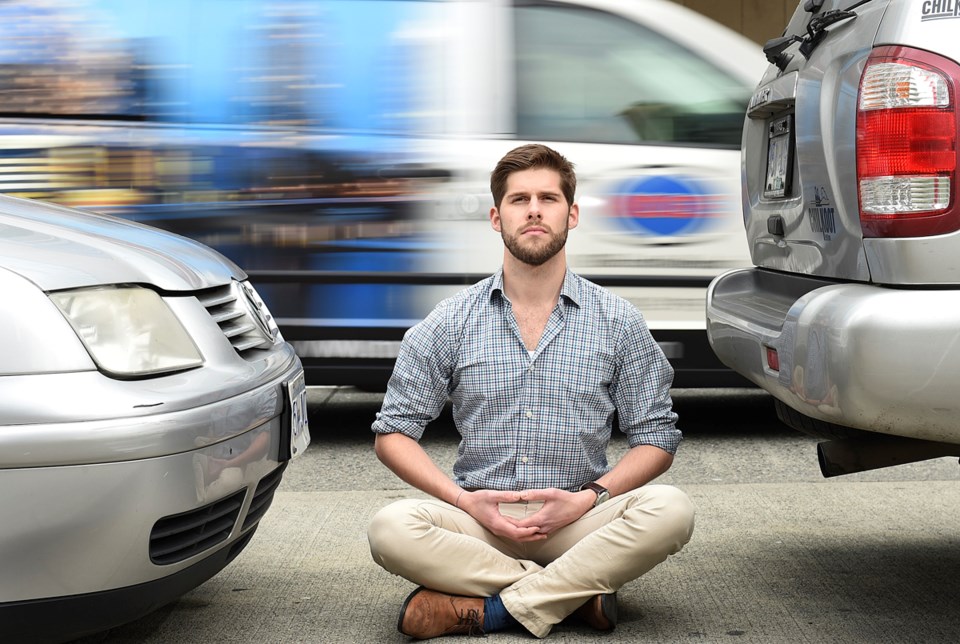 Remington Cooney teaches others how to use contemplative practices to bring peace to busy, urban lives. photo Dan Toulgoet

Once a month, Remington Cooney leads a class in meditation and mindfulness in Kitsilano. But he’s got bigger plans. He wants to create a community of people engaged in the practice, including those in the “shadow side of the city” — people in poverty or with addictions, who could benefit from contemplative practices as much as the middle- and upper-income crowds that flock to B.C.’s many meditation retreats.

Mindfulness and meditation are ideal for hectic Vancouverites “on and off the cushion,” he says.

“I think the conception is that mindfulness is something we do at certain times of the day, in a certain posture, in a certain place and it usually involves a very peaceful, serene environment,” he says. But the time that people really need mindfulness practices, Cooney says, is usually when we’re not on the cushion.

“It’s times when we’re in traffic. It’s times when we are stressed at work or on the computer, on Facebook and we can get away from Facebook and we forgot to breathe,” he says. “All those sorts of moments are when we need mindfulness. So you can think of the cushion training as just one aspect that we should be able to take and integrate into all the other aspects of life.”

This is a concept he learned from studying Zen Buddhism. But what is mindfulness anyway? There is no universally accepted definition, he says, but he likes the scholar Jon Kabat-Zinn’s words: paying attention in a particular way to the present moment nonjudgmentally, though Cooney adds another layer: “The other aspect is paying attention to how you are paying attention.”

Cooney’s other major influence is Daoism.

The Dao (also spelled Tao) translates to “the way” or “the road” and is based on the ancient Chinese book the Daodejing. It posits that “there is a natural rhythm, there is a natural flow, to the universe and if we listen closely with our hearts, we can harmonize and synch up with this natural current, this natural flow, which is like a river, of what’s going on around us,” Cooney says. “So when I started investigating the Dao, I started looking at how I could enter into the synchronicity of my life by just being still and listening.”

He admits these concepts are hard to put in words, partly because there is an inherent paradox in the very concept.

“There’s a concept in Taoist philosophy called Wu wei,” he says. “It means action in non-action. Sort of effortless action. When we are on the cushion, we’re practising mindfulness, we’re trying to get us to a state of stillness, we’re really trying to still the mind and still the body and still the breath so that when we go out into the world, we are acting and we’re in movement, but we are maintaining the sense of stillness. There is this paradoxical effect. You can be really active, you can be just as busy as you normally were, but there’s stillness and that allows you to also be acting in non-action. There’s something greater that’s come in and is kind of guiding you. When you connect to your heart, it feels like you’re a vessel for something greater that’s guiding you through your life even though you might be just driving your car, doing the dishes and those sorts of things.”

That apparent paradox is mirrored in the idea that people should escape the city to retreat to some Zen centre in the forest to experience stillness. But Cooney wants people to learn to find that place of stillness amid the hubbub of urban chaos. So he’s holding an event called

The Dao of Now: Clearing the Haze of the Modern Age on May 29 at Banyen Books. He will introduce those who haven’t been to one of his classes to the way they unfold, but the second half will be a brainstorm about how to realize his dream of a meditation “retreat” right in the heart of the city. It may be a literal place or it may be a community that comes together in an ad hoc way or it could be a bunch of “pockets” of community. He’s open to suggestions.

An Australian who arrived here five years ago to study, Cooney says it seems “like my heart really brought me to the right place.”

He first fell in with a group of students into meditation who called themselves Conscious Shift, which, in turn, transformed into Cooney’s classes, which, like the Banyen event, he calls the Dao of Now.

“I had this community around me of students that were interested and I was doing a lot of reading in Taoist philosophy and in Zen Buddhism and just using those readings, and using that inspiration, I started to integrate that into some of the meditation classes I was leading,” he says. “It just felt like it was really opening up something in me that was making me feel like I was doing what I was meant to do here on earth.”

Cooney is working on a master’s degree in contemplative education at SFU. It’s a new program that aims to integrate the sorts of practices Cooney teaches into elementary, secondary and university educational settings.

Contemplative practices put people into a place of stillness, he says, where they can access the wisdom that exists in every human if they are capable of accessing it.

“The by-product of that is that we start to feel what’s really going on in our hearts,” he says. “And when I say hearts I mean in the entirety of our bodies and not just in our intellectual minds.