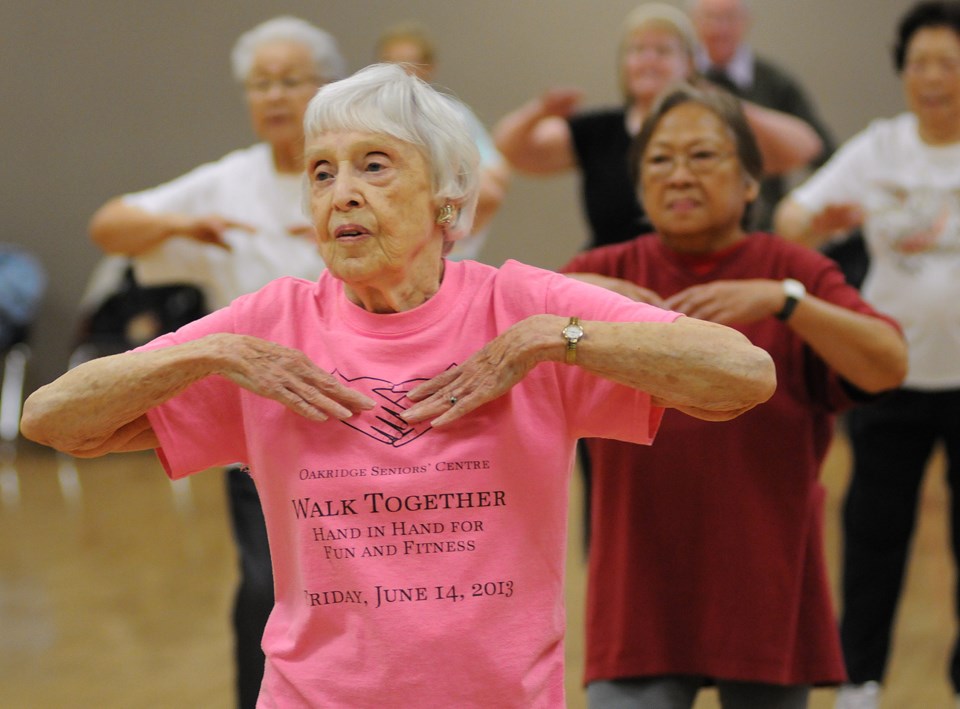 The fact Eeckhout is 89 years old is a non-issue with the crowd gathered for the Fun and Fitness class offered twice a week by the Oakridge Seniors Centre, located on the southwest side of Oakridge Centre, located at West 41st Avenue and Cambie Street.

“I’ve been attending for 10 years,” Eeckhout told the Courier during a brief water break halfway through the hour-long session. “But some have been coming for 20 and 25 years.”

It’s not just the Fun and Fitness classes drawing seniors to the centre. They also come for other programs centre manager and programs coordinator Fe Alluri has introduced, such as the Latin-influenced Zumba and belly dancing.

Alluri is introducing the classes to attract aging members of the Boomer generation, also known as “Zoomers” for their continued interest in keeping active. “We have a lot of Boomers living in the area,” said Alluri. “I’d also like to see us host an occasional pub night and a brunch or breakfast on Saturdays.”

While the centre offers classes typical of most seniors facilities, such as osteofit, whist and tai chi, the daily activities calendar also includes Spanish lessons, travel club meetings and manicure and pedicure sessions the third Wednesday of every month. And just to keep things interesting, in July Alluri organized a rafting trip on the Squamish River for a group of the centre’s more adventurous seniors. Alluri recently had the menu in the centre’s café revamped to better suit the increasingly multicultural membership.

The October menu includes such offerings as butter chicken, liver and onions, stir-fried chicken, and meat loaf and yellow rice.

Eeckhout said the main reason she enjoys the exercise classes is instructor Kathy Feay, a sentiment shared by 90-year-old Beau Jorgensen, who has been attending the fitness classes for more than 20 years. On Wednesday, Feay was not going easy on the group of more than two dozen seniors working out to classic songs such as “Kansas City,” “Stay (just a little bit longer)” and the 1961 doo-wop hit “Blue Moon.”

Dressed in a neon-yellow T-shirt and black tights, Feay good-naturedly encourages her students to “run for the bus,” “do the Charlie Chaplin,” and “lift those knees.”
Feay calls the seniors centre the “best kept secret” of Oakridge Centre. “There are so many seniors who come to the mall and don’t even know we’re here,” said Feay. “I’ve got my fingers crossed that will change once we’re in our new space.”

That new space is expected to be included within a community centre proposed as part of a massive redevelopment of the Oakridge Centre property, currently undergoing public consultation.

Alluri said so far the seniors have been told there will be no need for the centre to close during the large construction project because a new civic centre has been deemed a priority. But what exactly that space will look like has yet to be decided. According to Alluri, it better be large enough to accommodate a couple dozen Latin-dancing seniors.