Oakridge: The neighbourhood at a glance

Oakridge stretches from Granville to Ontario street between West 41st and 57th.
Oct 11, 2013 9:29 AM By: Vancouver Courier Staff 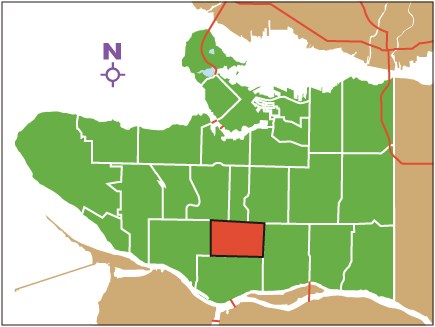 Oakridge stretches from Granville to Ontario street between West 41st and 57th. It’s largely residential aside from prominent sites at its edges such as Langara College and Langara golf course on the southeast corner, and Oakridge Centre and the Jewish Community Centre along West 41st between Oak and Cambie.

The neighbourhood was one of the last developed in Vancouver.

“It’s one of the last pieces of the original CPR land grant, so it was bush until the mid-1950s — until about ’56 or ’57 when they began to develop Oakridge [mall],” recalls local historian Michael Kluckner who grew up in the city.

“There was actually a shooting club on Oak at about 45th until 1955 or ‘56. I can remember the sound of the shooting. It just says how much out in the toolies it was.”

Kluckner’s book Vanishing Vancouver, published in 1990, notes that in May 1957 80-foot wide building lots went on sale for an average price of $7,125.

Some of those houses have already been knocked down and rebuilt into larger homes. Even those that haven’t been demolished list for upwards of a million  dollars today.

“I don’t know that there’s an area that you could say that’s done such a rapid turnaround from the original houses, which were typically well built,” Kluckner says. “They certainly seemed posh to me when I was a kid.”

The introduction of the Canada Line along Cambie in 2009 and the city’s appetite for densification is sparking further redevelopment in the neighbourhood. Oakridge mall was developed in the late 1950s and renovated in 1984, but the city is weighing a controversial proposal that would double its size, potentially feature towers up to 45 storeys and include a 70,000 square foot civic centre. A staff report to council on the proposal is expected in early 2014 and will likely be followed by a public hearing.