Richard Dawkins a god among atheists

On Sunday night, I nabbed a couple of the last seats at the Chan Centre to hear in person two of the rock stars of the so-called New Atheist movement. It was a birthday gift, actually, for my nephew, who is an atheist of evangelical fervour.
Nov 9, 2016 12:32 PM By: Pat Johnson 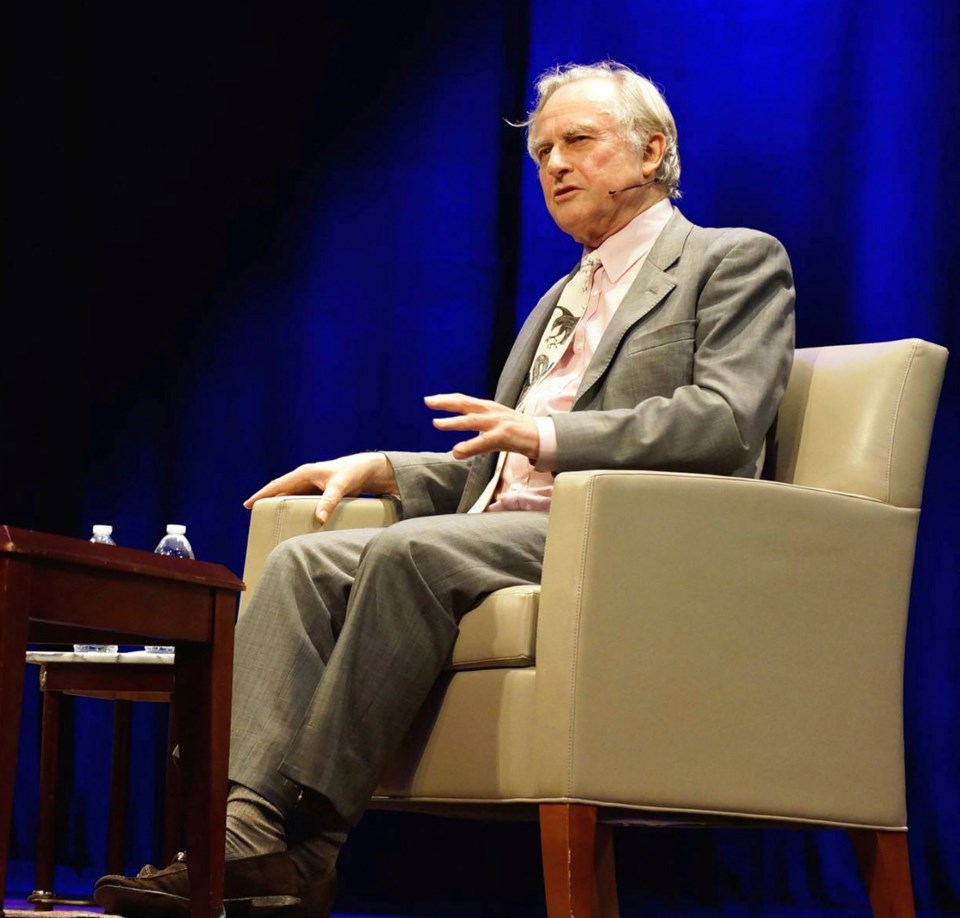 Richard Dawkins has heard accusations that atheists can be just as pig-headedly certain of their correctness as theists, of having blind faith in science, but he neatly discards this. "It's not blind faith," he said. "It's reasoned faith."

On Sunday night, I nabbed a couple of the last seats at the Chan Centre to hear in person two of the rock stars of the so-called New Atheist movement. It was a birthday gift, actually, for my nephew, who is an atheist of evangelical fervour.

The event featured Richard Dawkins, a British evolutionary biologist, best-selling author and apparently a veritable God among atheists. Dawkins was on stage with Matt Dillahunty, a Texan who was raised Southern Baptist and was headed for a life in the pulpit until his conversion to atheism.

There was an air of self-righteousness at times, which is understandable among people who know The Truth. The two men spoke of their frequent interactions with religious people and Dawkins recalled one particular debate in which he and a theist were asked what could change their respective minds.

“Nothing,” replied the religious man.

Dawkins differs from Dillahunty because he is, first and foremost, a scientist. So his beef is really with creationism. The proof of Darwinian evolution is, well, verifiable proof. Dawkins seems to have come to a broader antipathy toward religion from that basis. Dillahunty is different, but perhaps more common among the atheists I know, in that he came from a religious foundation and rejected it.

They have heard the accusations that atheists can be just as pig-headedly certain of their correctness as theists, of having blind faith in science, but Dawkins neatly discards this.

"It's not blind faith," he said. "It's reasoned faith." Science depends on peer review, repetition of experiments honed over centuries to guard against self-deception, double-blind controlled trials and so forth. Faith consists of believing in something unprovable.

Even if the evidence presented itself, Dawkins suggests he would still be skeptical. If Jesus returned in clouds of glory, he asked, "How do I know if it's not a very clever trick by Penn and Teller?"

Dillahunty added that, if God exists, he hasn't given Dillahunty any evidence, so he is left to determine that either God doesn't exist or doesn't want Dillahunty to know that he does.

"Either way, not my problem," he says.

The price of the tickets was on par with a professional theatre event and I can’t help thinking the theatricality might have been better if a defender of the faith had been there to spar. Both men have done their share of debating with religious figures, they said, and there is some value in it, though putting a creationist on stage with an evolutionist, they agreed, suggests that there is equal value to both positions. The downside of turning down such debates, Dawkins said, is that they accuse you of cowardice or knowing that you would lose.

The two were especially animated in lashing out at the term "Islamophobia." Dawkins said that accusations of bigotry against Muslims allow liberals to "give Islam a free pass" that they don't give to other religions for fear, perhaps, of being thought racist.

"Islamophobia is an absurd word,” said Dawkins. “It's a made-up word to describe this privileged position Islam has in our society."

If he can be accused of being phobic, Dawkins said, it is a phobia of beheading people and of women having their clitorises cut off.

Dawkins’ best-selling book, The God Delusion, has not been legally reproduced in Arabic, but an illicit Arabic version in PDF available online has been downloaded 10 million times, he says, including three million instances in Saudi Arabia alone.

After the success of that book, which was released a decade ago, he launched the Richard Dawkins Foundation for Reason and Science, which is now in the process of merging with the Centre for Inquiry, a New York- and Toronto-based organization with similar aims.

Among the foundation’s initiatives is the Openly Secular campaign, which aims to help atheists, freethinkers, agnostics, humanists and nonreligious people be more accepted in society.

"In the United States it is very, very hard for an open atheist to become a member of Congress," Dawkins said. Of the 535 senators and members of the House of Representatives, there is not a single avowed atheist (as of Sunday night, at any rate). Dawkins does not believe that's possible. To get elected to Congress, he says, "you've either got to be religious or a liar."

The foundation also operates the Teacher Institute for Evolutionary Science, which teaches teachers to teach evolutionary science. This emerged from the reality that, according to Dawkins, when some American teachers even approach the subject of evolution, students cover their ears and turn their backs and parents complain to school administrations.

Another interesting initiative is the Clergy Project, a sort of online support group for priests, ministers, rabbis, imams and other clergy people who are trapped for economic or social reasons in their professions even though they no longer believe. Dawkins claimed that there were more than 500 people involved in the project but Dillahunty interjected that there are more than that because he remembers when the number surpassed 666.

A questioner from the floor raised the issue that it is becoming increasingly difficult to address potentially offending topics on university campuses, which could make it more challenging for atheists to make their case. This brought out the brimstone from Dawkins, who noted that the University of California Berkeley, where he started his teaching career, has taken up disinviting speakers who administrators fear could offend members of the campus community.

"You go to university to experience things that might offend you," Dawkins said. "To hell with safe spaces. Grow up, in other words."