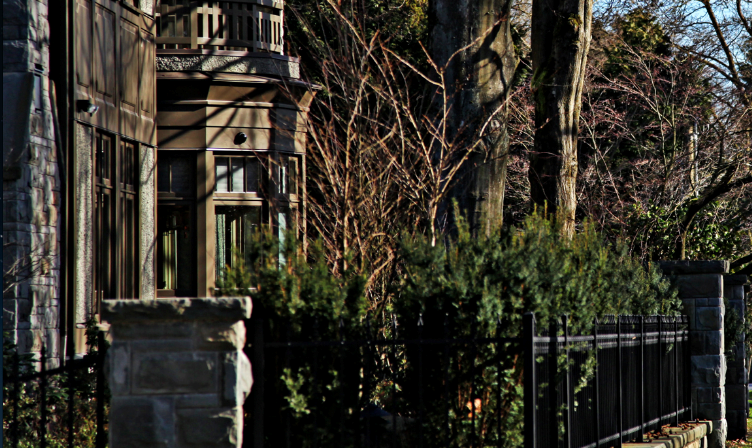 Million-dollar homes are the norm in Shaughnessy. Photo Jason Lang

On Jan. 13, the Courier visited three open houses for properties listed for sale in Shaughnessy.

The first, a 6,200-square-foot mansion built in 1912 at 2000 Cedar Crescent, was listed for $5.98 million. Realtor Henrietta Tan of Sutton Group West Coast Realty was showing the five-bedroom home to clients, telling them the history of the property. The home had been owned for 30 to 40 years, she said, before the current owner purchased it in 2011. The owner spent $1.5 million on renovations, upgrading the home’s plumbing, electrical and heating systems, as well as its kitchen and seven bathrooms, then decided against living in Vancouver and returned to China

The five-bedroom home, priced at $4.38 million, included a wok kitchen, a feature attractive to Shaughnessy’s growing population of new arrivals from Asia.
Han, a realtor for the past six years, said Vancouver’s real estate market is finally perking up. She said she’d sold two houses already in January, both in Shaughnessy. She said prices dropped about 20 per cent last year, but doesn’t expect them to decrease further, “because last year, it already dropped too much. I don’t think prices will go down dramatically again.”
Han said Shaughnessy is one area of Vancouver that buyers are naturally drawn to. “It’s just like a brand [name],” she said. “People already know it; they don’t even need to do advertising. Everybody knows Shaughnessy, they know it’s a nice area, it’s a nice neighbourhood.”

The 4,300-square-foot Georgian style home had just two owners since it was built in 1920, she said. The first family lived in it until 1998, when the current owners purchased the home.

Mills, a realtor for seven years, said 2012 was the worst year for real estate sales in two decades, but echoed Han’s opinion that the market was finally turning around. She reported a “busy” open house, comprised mostly of Asian buyers.

“They want to tear it down and build a new [house],” Mills said.

Where they’re coming from, everything is new... they like the bling.”

Other prospective buyers are local. “Some live in the area, and they just want to get a bigger home,” she said.

Others live in areas like Richmond, she added, and want to move closer to downtown.

Cheaper still was a 578-square-foot one bedroom in one of the few apartment buildings in Shaughnessy. The apartment, at 1023 Wolfe Ave., just off Oak Street, had an asking price of $299,700.

The most expensive property was a 10,516-square-foot mansion sitting on just over one acre of land at the heart of First Shaughnessy, at 3390 The Crescent.

Built in 1921, the home has six bedrooms, seven bathrooms, a wok kitchen, gym, wine cellar, outdoor pool, greenhouse, and five-car garage. Listed for $22.8 million on Jan. 13, the asking price was lowered, in the following week, to $19.9 million.