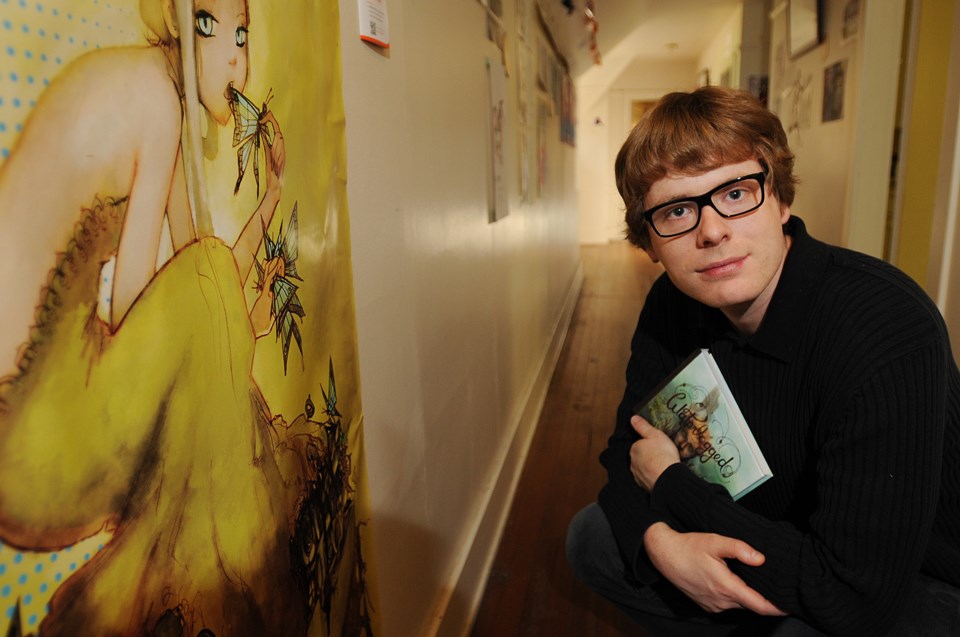 Bevan Thomas with a copy of the latest Cloudscape anthology, Waterlogged: Tales from the Seventh Sea. Photo: Dan Toulgoet

Bevan Thomas was working on an assignment for a graphic novel as literature course at a Main Street coffee shop in 2009 when the conversation at a nearby table drew his attention.

“[They] were talking about comics and Dr. Who and story ideas and fantasy stories, action movies and various things I really enjoy,” he said.

The conversationalists were members of the Cloudscape Comics Society and Thomas learned anyone could attend their weekly meetings. He returned to the coffee shop the following week.

A freelance technical writer and Sunset resident, Thomas was keen to pen comics but he needed an artist. At Cloudscape he met a woman fresh out of an animation program and they collaborated. “Our artistic relationship ended up working out so well we did a few other projects together and actually, now I’m dating her,” Thomas said. “So that was definitely a very fortuitous meetup.”

After attending the long-running Vancouver Comic Jam where participants collaboratively create comics, he recognized the high level of skill in the city and decided this talent should be showcased in an anthology.

Cloudscape has published seven anthologies. Waterlogged: Tales From the Seventh Sea, the hardcover anthology it published in June, includes a horror comic by Nina Matsumoto, a cartoonist for The Simpsons comic books who Thomas says is grateful to have a different outlet for her creativity.

Cloudscape has grown from nine contributors to more than 60 men and women aged 19 to 50. Their artistic styles range from manga to American underground “comix” with genres running from lighthearted humour to serious drama.

Cloudscape welcomes a wide range of artists. They include prominent indie cartoonist Colin Upton and newbies who attend weekly meetings at South Memorial Park’s field house on Ross Street near East 41st Ave. to network and develop their craft.

Cloudscape moved into the field house last fall as the artist in residence for three years. Thomas, who wore plaid slippers while introducing the Courier to the cozy space Wednesday, said members offer cartooning classes for kids at Sunset Community Centre, participated in the Family Fuse event at the Vancouver Art Gallery in March, and will host a free Halloween Party for families at the field house this Saturday from 11 a.m. to 3 p.m.

Cloudscape is working on an anthology called Mega Fauna, its first youth-targeted collection that will include stories about people interacting with animals. It’s also about to publish on its website Epic Canadiana, a Canadian superhero anthology Thomas spearheaded and edited.

In the 1940s, the Canadian government banned non-essentials from coming across the border, which meant no comics from the U.S. entered the country, according to Thomas. That restriction sparked a five-year boom in the Canadian comics industry with characters such as Nelvana of the North, an Arctic demigoddess who fought Nazis and super villains, and Johnny Canuck.

Thomas and other cartoonists pay tribute to and have updated these characters for an online anthology called Epic Canadiana. Thomas said the original Nelvana was supposedly an Inuit goddess “but everything was made up,” so he reinvented Nelvana’s character to be strongly based in Inuit folklore.

He hopes other members will be inspired to lead their own projects.

“So it’s this very powerful sense of community,” Thomas said. “That’s one of the reasons why we were so excited when we got the field house, because it really allows us to expand that.”