Sunset: The neighbourhood at a glance

Bordered by Ontario Street in the west and Knight Street in the east, Sunset begins at 41st Avenue and continues south toward the Fraser River.
Oct 24, 2013 3:20 PM By: Megan Stewart 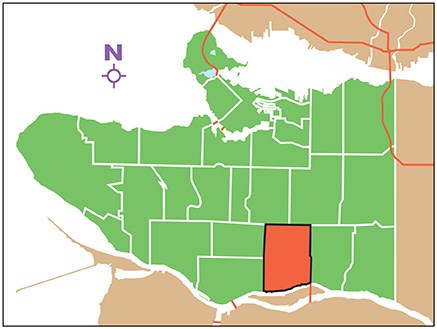 Bordered by Ontario Street in the west and Knight Street in the east, Sunset begins at 41st Avenue and continues south toward the Fraser River. The neighbourhood was once part of the incorporated District of South Vancouver and amalgamated with Vancouver in 1929. This southern slope was farmland and clusters of homes and villages, the first which were established in the 1860s.

From the Fraser River, it could take a day’s journey to reach the Granville Townsite — present day Gastown — by rowboat or through swamp and uncleared forest. Westminster Avenue — Main Street today — was pushed south from Mount Pleasant in 1910. Streets were named for property owners but many have since become numbered avenues and in 1900, 20 acres west of Fraser Street, then known as North Arm Road, sold for $2,000.

Today, lots on the same land a tenth the size of one acre are listed as high as $1.4 million.

The neighbourhood was home to Vancouverites of Europeans descent and, increasingly through the century, residents of Indian and Chinese heritage.

The number of Punjabi speakers has increased consistently for decades and in the last 10 years became the most common language in Sunset. More than one in four, or 26 per cent of people living in Sunset, spoke Punjabi as their first language compared to less than three per cent of the general city population. In 2006, twenty-one per cent spoke Chinese and 24 per cent spoke English. Vietnamese and Tagalog are each spoken at twice the average rate across Vancouver.

Businesses, restaurants and services cater to these communities, particularly along the thoroughfares of Fraser and Main streets, and prominent among them was the Punjabi Market.

Once known for the highest concentration of jewelry stores in Canada, the Punjabi Market now counts numerous empty store fronts and declining traffic.

Unlike rising retail property value across the city, assessments in this specific pocket declined 15 per cent since last year as businesses relocate to Surrey.