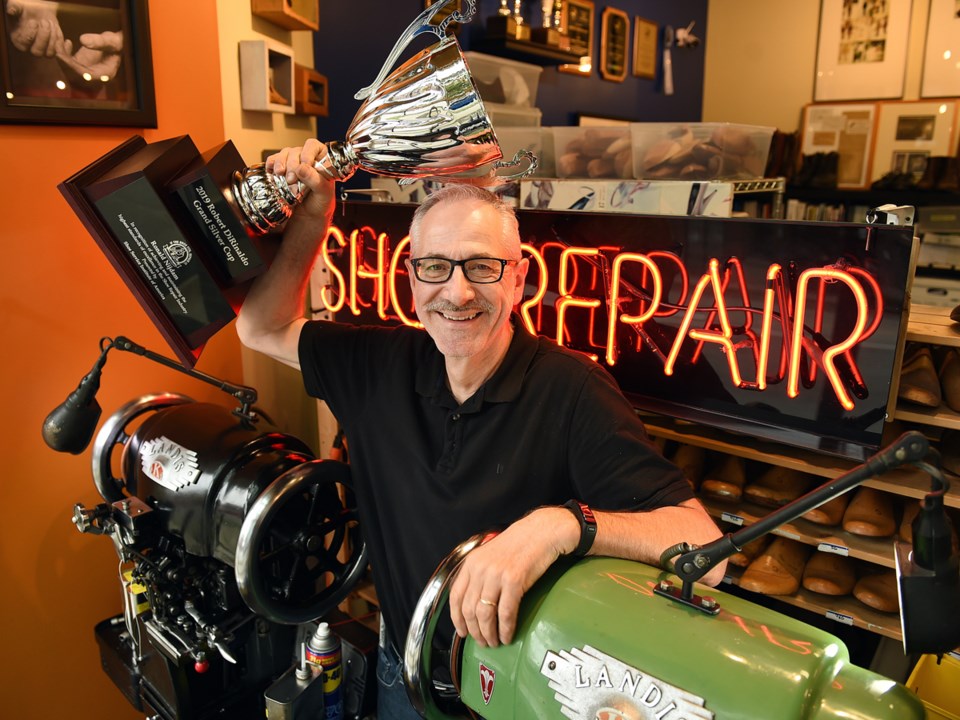 For the first time, a Vancouver cobbler has won the Shoe Service Institute of America “Robert DiRinaldo” Grand Silver Cup.

Named in memory of the cobbler Robert DiRinaldo, who won the award in 1987 and served as competition judge for 25 years afterwards, this year’s prize went to Ronald Nijdam, owner of Quick Cobbler Shoe Repair on West Second Avenue.

Nijdam had already participated in the North American competition three times, always coming up just short of the Grand Silver Cup, but this year managed to finally break through and claim the top prize.

“I finally won the big one,” he told the Courier, smiling. “There’s a lot of shoe repairers out there — like in any industry — that aren’t as keen. They live in their own little world and they do their own thing and say, ‘I know I’m good, I don’t need to enter a competition.’ But you know, competition is fun, and it’s also really good to improve your skills, no matter what your level is.”

Each contest sees entries from 30 to 40 shoe repairers from across North America, most of whom are regulars to the competition. Given the quality of the work expected and the constant responsibility of running their own shops, entrants can spend months perfecting one of their entries.

“They’re at the top of their game,” Jim McFarland, the SSIA President, told the Courier in a phone call. “It’s very competitive.”

Entrants in the competition must acquire two pairs of shoes in need of repair and fix one of each pair before sending them to the judges at the SSIA headquarters in Aberdeen, Maryland. All shoes entered must be previously worn and cannot have been repaired previously. One of the pairs must have the whole sole replaced and must be a man’s dress shoe. The other can be either a man or a woman’s shoe and need only have a half-sole replaced.

The judges – usually previous winners of the Grand Silver Cup – then compare the state of the repairs and determine the quality of the work that went into the fixes. They look for the tinniest things, from a misplaced stitch to light scuffing on the leather; everything has to be perfect.

“You’re not supposed to fancy them up, but they have to look like they came new out of the box,” Nijdamsaid.

Nijdam’s son Patrick also entered this year, beating his own previous bronze result by bringing home silver. Both of them went to Florida to collect their trophies at the 105th annual Shoe Service Convention in Orlando, Florida.

Both Nijdam and Patrick submitted two pairs of men’s heeled shoes to the contest. The competition focuses on men’s shoes for good, albeit surprising, reasons.

“They’re the most challenging,” Nijdam said. “There’s the most work to be done. Most women’s shoes don’t have the stitching, they don’t have welds, they’re a much lighter build so most of them are just a glue construction and the heels are much smaller usually, so there’s more work to be done [on a man’s shoes] to finish it or bring it back to its original design.”

Having won the top prize, Nijdam will no longer be eligible to compete in future Grand Silver Cups, but he describes that situation as “perfect.”

“I personally wouldn’t want some old guys who have already won around taking all the prizes because it doesn’t do anything more for them and it discourages the new generation.”

Nijdam knows about the passing of the torch. He himself is a third-generation cobbler. He got his start in the industry at the age of 12, delivering repaired shoes for his grandfather in the Netherlands, where he grew up.

Nijdam moved to Vancouver in 1985 after being hired by a laundry mat owner to teach his employees how to operate shoe repair machines, many of which are Dutch. Now he is passing on his cobbler knowledge to the next generation, with both his sons — Patrick and Thomas — working with him in the shop.

In the meantime, the industry has changed. New cloths, composites, plastics and recycled materials have been added to the traditional materials used to make shoes, namely leather and rubber. Those can be difficult to repair, but Nijdam is happy to work with the new materials if he thinks he can manage it.

“A lot of old-fashioned shoe repairers complain that there’s too much plastic in shoes, that they’re too cheaply made, that they’re throw-away items. And it’s somewhat true. But on the other hand, I find many of our customers spend relatively serious money on their shoes… So if they can get them repaired, remain as comfortable as they are and you give them a second life — and for a lot less than a new pair! — then you’ve got a winner.”