Vancouverites are starving for discussions about death 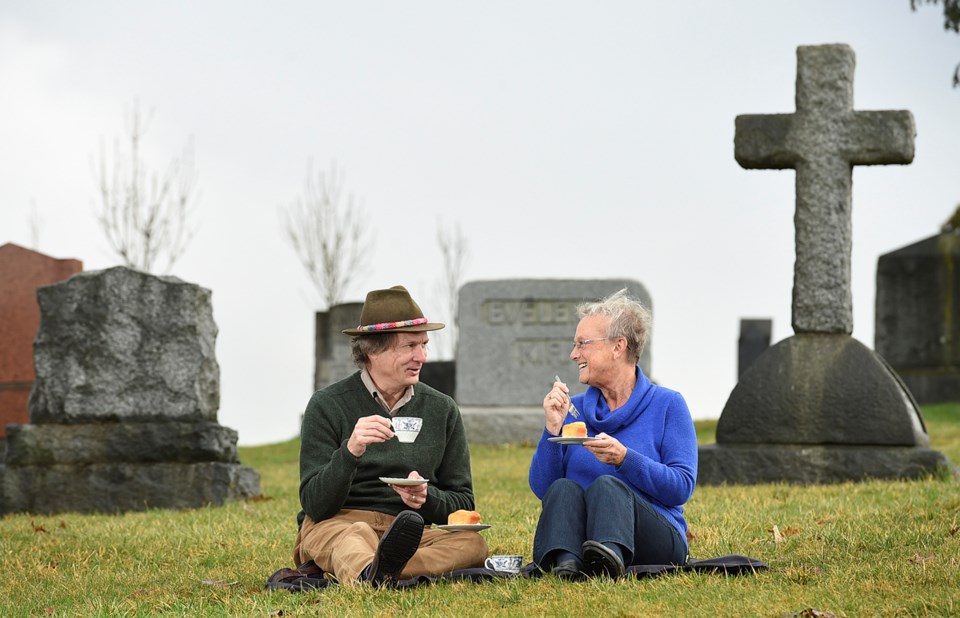 Tom Esakin and Anneke Rees brought Death Cafés, in which participants talk about death over tea and cake, to Vancouver. There has been no shortage of interest in the cafés. Photo Dan Toulgoet

When I wrote about Death Cafes last February, the organizers weren’t sure anyone would show up.

These informal gatherings — tea and cake are consumed while participants talk about death in whatever way group dynamics dictate — are a global phenom brought to Vancouver by Anneke Rees, a long-time palliative care worker, and Tom Esakin, an interfaith spiritual director.

“When we started the Death Cafes, literally we thought maybe three or so people would come,” says Esakin. The pair ended up turning people away because the groups got too big and they had to schedule extra sessions. Turns out many Vancouverites have a hunger for more than cake; they are starving for opportunities to discuss the one inescapable thing besides taxes we all face.

“There is no shortage of customers,” says Esakin, laughing.

Some people needed convincing, though. The board of one community centre was anxious about the idea of a Death Cafe, based partly on some cultural norms around bringing bad vibes into the space, but also on the belief that no one would come. When the centre did give its approval, the booking official predicted zero turnout. They got 20 people and the centre has now booked more sessions for the new year. Rees and Esakin also have an invitation from SFU for a program next year and they are rejigging their approach based on feedback from participants.

Post-café evaluations told them participants wanted more focused, in-depth discussions. So they organized a day-long forum last month, which proved too emotionally draining, so they are streamlining the next one into a three-hour session Nov. 19.

A few interesting findings emerged when scores of Vancouverites gathered to talk about death. Esakin and Rees estimate that 95 per cent of participants are women. They speculate that women are more open to talking about their feelings around the most profound subject of all. Some other gender expectations might also play in.

“Men — and this is a generalization — men are big on fixing things and this is one area you cannot fix,” says Rees.

Esakin suspects women and men both know they cannot control the timing of their own death, but women who accept this fact are intent on managing the process, while men “possibly don’t want to accept it because they can’t fix it.”

Participants also tend to be older, although some younger people who are confronting the passing of parents or grandparents also attend. There have also been a number of clinicians who have joined in, many of whom recognize that the medical system may do a fine job on the medical side of caring for the dying, but are lacking on the psycho-spiritual side.

Another observation the organizers had was that discussion about death was overwhelmingly theoretical. Everyone there, presumably, was considering their mortality, yet mostly from a remove of some distant time in the future. This comforting remove was stripped away at the daylong forum, when participants were guided through the process of being told they had a terminal illness and three months to live.

“I’m not afraid of death,” Woody Allen said. “I just don’t want to be there when it happens.” This seems to be a common attitude. Participants, say Esakin and Rees, are not generally afraid of being dead, other than perhaps a generalized fear of the unknown, but they do have concerns about their last days and moments.

“People are afraid of physical pain,” says Rees. “But I think, too, that that emotional and psychological and spiritual pain is actually at that point in time something that a lot of people had not really thought that much about but, which is actually as big, if not bigger, than physical pain for some people.”

As I have written about repeatedly in this space, Vancouverites may be among the least religious people in the world, though we are often highly spiritual. This played out in spades at the Death Cafes.

“Religion was barely mentioned by anybody,” says Rees.

Now, it may be that people for whom the church does play a role are not drawn to public events that address death from a primarily secular perspective. Still, considering that a generation or three ago, our entire conception of death was integrated with our expectations about

God, heaven and that whole motif, the near-complete absence of religiosity among multiple self-selecting groups of Vancouverites gathering to talk about death is certainly remarkable.

Despite the dearth of religion, there is plenty of spirituality, both say. Esakin puts a finer point on it.

“I’ve been going to Anglican churches for decades and I’ve encountered more holiness at some of these death gatherings than I actually have at churches,” he says. “You’ve got absolute strangers coming together and they are just baring their soul. They’re talking about very deeply intimate life experiences… they just seemed to be embracing the opportunity to share what’s on their hearts because they haven’t had the chance. It’s actually very sacred to hear people being willing to share their stories with absolute strangers.”

Despite the overwhelming success of the first series of Death Cafes in the city, some people still think it’s weird that people would get together to discuss a topic many consider macabre or gloomy. Esakin, obviously, disagrees.

“It’s very irrational not to have the discussion because it is going to affect all of us,” he says. One person who apparently understood this was a participant at one of their first cafés. He seemed dissatisfied at the end. He had more questions, wanted more discussion, wished the session would go on longer.

“He wanted more time,” says Esakin. As it turns out, he may have known his time was running short. A follow-up email to the group elicited a reply from the man’s wife, telling them he had passed away.

“Isn’t that something that someone would really have to come to a community event to discuss what’s happening in their life?” Esakin says. “That they didn’t feel they have the resources in the medical system.”

The Death Cafe series, which will continue along with more in-depth forums, brought up a lot of things, some of which Rees and Esakin anticipated and some they didn’t.