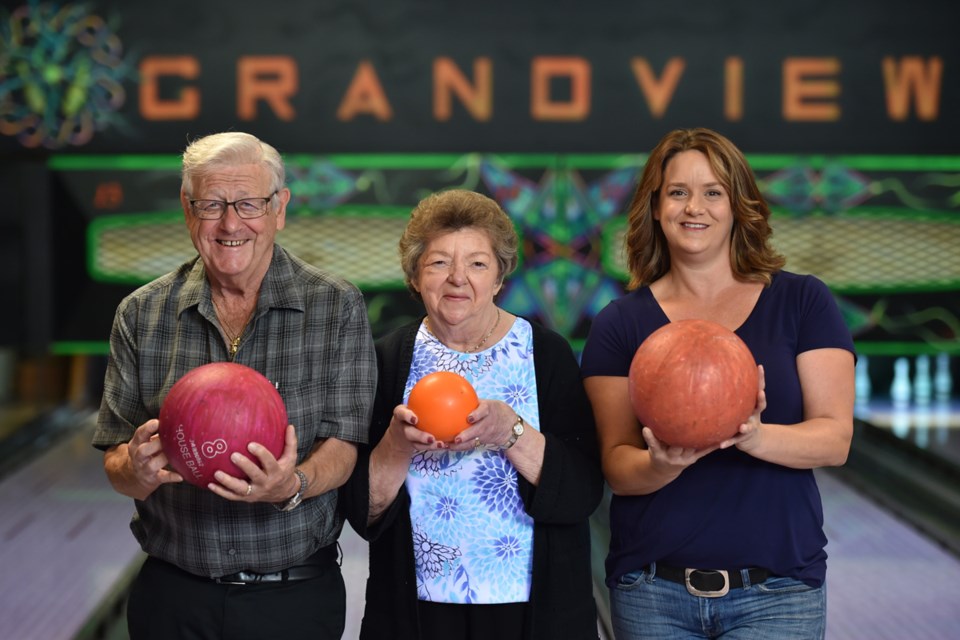 Births, deaths, marriage, life-long friendships and all the minutiae that happens somewhere in the middle — for 70 years, the Marino family has had front-row seats to virtually all of life’s colours and cycles.

The owners of Grandview Lanes are in the midst of a month-long celebration of seven decades in the bowling alley business on the same plot of land on Commercial Drive and Sixth Avenue.

When asked to reflect on what that means, family matriarch Lorraine Marino is succinct and to the point.

That party happens Sunday, Sept. 24 from 5 to 9 p.m. The informal, open-house setting is meant to cast a net to bowlers old and new to reconnect over coffee, cake and beers.

It’s not all that surprising that Audrey Jerome plans to be there. At 80, Jerome has been bowling at Grandview Lanes since it first opened in 1947. She’s at the alley on the day the Courier visits along with a dozen or so women in their 60s, 70s, 80s and 90s who play in a league called the Classics.

They’ve been bowling together every Wednesday for roughly 35 years.

“I’ll bowl until they tell me I can’t do it, until they come and get me or something happens where I physically can’t do it anymore,” Jerome said.

Ditto for Jean Macpherson. At 90, she’s the oldest in the group and has bowled at Grandview for 55 years. She cut her teeth in ladies leagues when all 20 lanes in the building were full of her counterparts. Now, they take up maybe four or five at most.

“A lot of the people we’ve bowled with have passed on,” Macpherson said. “And we don’t bowl as well as we used to.”

At 79, Margaret Perkins is one of the babies in the bunch. She recalls the days when the pin furthest to the left in a five-pin setup had to be knocked down, or no scores would be recorded. Those rules were abandoned at least 30 to 40 years ago.

“The appeal is in the friends and it’s the people you meet over time,” she says.

The second-oldest bowling alley in Vancouver after Commodore Bowling and Billiards was the brainchild of Louis Marino. Louis’s death in 1969 prompted his son George to ditch his accounting gig in Toronto and return home.

He’s been at it ever since, alongside his wife Lorraine, both of whom are 75, and daughter Tammy, who now runs the day-to-day management. The bowling gospel, according to Tammy, is as follows:

“Wear your bowling shoes. Keep your food and drinks off the lane. Stay behind the line and try not to throw the ball up in the air,” she said.

George and his mother lived in a suite on the upper floor long before it was converted into lanes. His bedroom window overlooked lane 17, where he was the de facto pinsetter for much of his youth. Women ran the place by day, and free babysitting was offered. At that time, playing a game cost three cents, and George was setting pins by the age of six. Tammy, too, was raised on the lanes.

The Marinos have learned to roll with the punches in order to stay afloat. Gone are the days when leagues were the primary source of income. The focus today is less on sport and more on entertainment. Enter liquor, black light bowling, Big Lebowski and Kingpin theme nights and birthday parties out the wazoo — somewhere in the range of 600 to 700 a year.

That emphasis on entertainment has drawn the likes of Sarah McLachlan, kd lang, heavy metal band Steel Panther and players from every major sports team in Vancouver. The Toronto Raptors stopped in years ago, and that was the last time a size 17 shoe — the biggest in the rental inventory — was loaned out.

Tammy, however, will not disclose which celebs have tanked or triumphed.

“We don’t pay attention to peoples’ scores,” she said with tongue in cheek.

The property itself has certainly drawn its fair share of attention. Developers come calling all the time, though George is having none of it.

“It’s had its ups and downs just like anything. But… not that great of a fluctuation,” George said. “It’s quite affordable and it’s something that the whole family can do. It doesn’t matter if you’re four years old or if you’re 94 years old. We’ve had bowlers bowling right until their 100th birthday.”

For info about Sunday’s party, go online to facebook.com/GrandviewLanes.