Where to pay your respects in Vancouver on Remembrance Day

There are events honouring veterans taking place across the city Nov. 11
Nov 5, 2019 2:40 PM By: Sandra Thomas 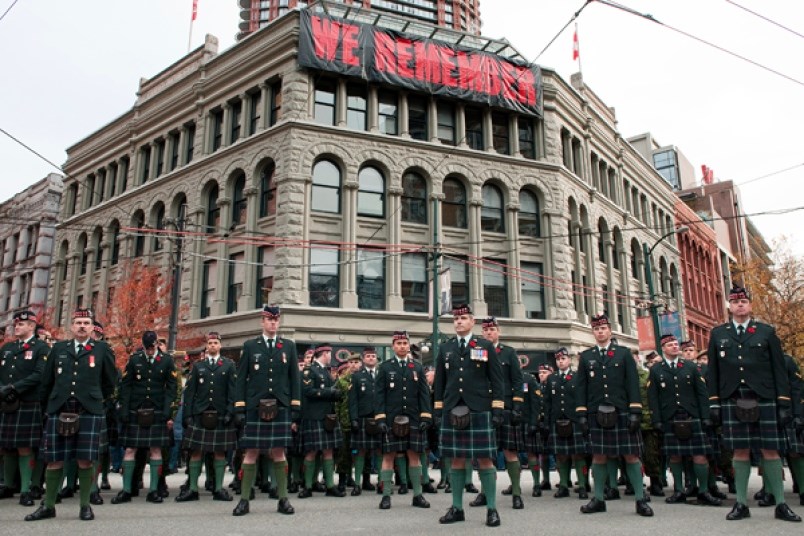 The Remembrance Day ceremony at Victory Square is the largest in Vancouver. Photo Jennifer Gauthier

Pay your respects at a ceremony near you Nov. 11.

The city’s largest Remembrance Day Ceremony begins at 10 a.m. with a performance by the Vancouver Bach Youth Choir and Sarabande starting at 9:45a.m. At 10 a.m. veterans, military marching units and bands will be led to Victory Square by the Vancouver Flag Party for the cenotaph ceremony starting at 10:30 a.m.

Shortly afterward, there will be a combined performance by Vancouver Fire and Rescue Services and the Regimental Pipes and Drums of the Seaforth Highlanders of Canada. At 11 a.m. the "Last Post" will be sounded. There will be two minutes of silence, during which a 21-gun salute by the 15th Field Artillery Regiment will be heard from Portside Park.

"Lament and Rouse" will follow. The Royal Canadian Air Force will conduct a fly past moments later, weather permitting. In Flanders Fields will then be sung by the Bach Youth Choir and Sarabande and wreaths will be placed at the cenotaph. The main parade will march west along Hastings past the reviewing stand between Homer and Richards streets, turn right at Richards, east on Cordova, then south on Cambie. The veterans section of the parade will march west along Hastings Street past the reviewing stand and disperse. Visit legionbcyukon.ca for more information.

“11” at Mountain View Cemetery
Enter the Cemetery on East 39th off Fraser Street, drive straight into the cemetery towards the buildings ahead. The Celebration Hall is the northern-most building.
Little Chamber Music is proud to again present this unique music and history project, “11.”

Part of the Field House Residency (2012 to 2015) with the Vancouver Park Board, “11” was developed over two years. The project included monthly public meetings, a trip to the Library and Archives and War Museum in Ottawa, research at the Vancouver Archives, visits with a 99-year-old D-Day veteran, an installation at the Roundhouse and a performance and event on Remembrance Day, 2014 in Falaise Park, which brought more than 1,000 people together.

“11” was designed and developed to honour and celebrate 11 veterans from Vancouver, including several from the Renfrew Heights Veterans Housing Project and to tell the story and history of the housing project to other communities in Vancouver. By having each of the 11 instruments in the musical work represent a specific veteran, they're paying a musical tribute to the bravery and sacrifice of an entire generation.

Stanley Park near the Pavilion

This year marks 68 years that the University of British Columbia has hosted a Remembrance Day ceremony. This special ceremony is an opportunity for faculty, staff, students and members of the on and off-campus community to honour and remember all those who served in times of war, military conflict and peace.

This year, the Remembrance Day Ceremony at UBC will include short readings, remarks from special guests and musical performances by the UBC Opera Ensemble. Everyone is welcome to attend this annual ceremony — doors to the War Memorial Gym will open at 10 a.m. and the ceremony starts at 10:45 a.m. Light refreshments will be served after the ceremony and all are welcome to stay.

12:30 to 1 p.m.
Chinatown at the corner of Keefer and Columbia streets
The Chinatown service commemorates the struggles and sacrifices of the early Chinese pioneers, along with those of Chinese Canadian military.