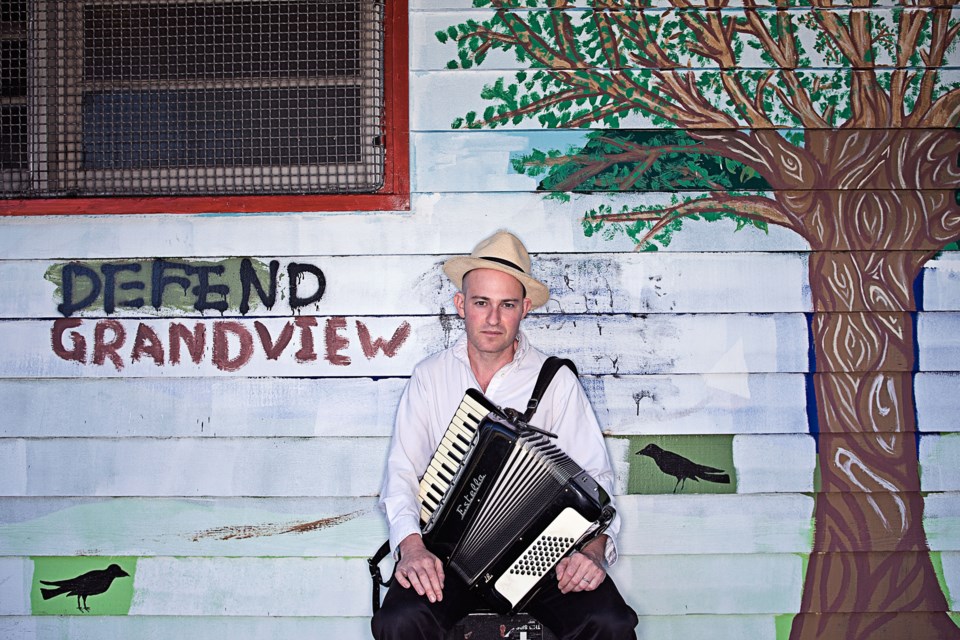 Vancouver singer-songwriter Geoff Berner is known around these parts for his wry lyrics and adeptness on his trusty accordion. For his latest endeavour, Berner put his nimble fingers to another use — writing a book. Festival Man is billed as a “found memoir” following the escapades of music manager Campbell Ouiniette “as he leaves a trail of empty liquor bottles, cigarette butts, bruised egos and obliterated relationships behind him.” Prior to his Nov. 30 show at the WISE Hall, Berner talked to the Courier about his people skills, being big in Scandinavia and why he won’t be writing his own memoir anytime soon.

1. As a touring musician you interact with far more people than the average person. What kind of skills have you developed because of that?
I know when a bar fight is going to happen seven to 23 minutes before it happens. In two minutes of conversation, I can tell when someone is a real music business pro who is true to their word, I can tell when someone is a fraud, and I can tell where on the spectrum between those poles most people fall. I can distract and pacify drunks and four-year-olds. People tell me their secrets between three and four in the morning. I am good at foosball. I know when to walk away, and when to run.

2. In terms of your book’s subject matter, you haven’t strayed too far from your own realm of experience. Do you think it’s important to stick to the adage “write what you know”?
Any time there’s fiction about a particular profession, those who practise the profession find themselves scoffing at stuff that would never happen. So far that hasn’t been the case with this book and musicians. That pleases me.

3. Do you find the writing process was a needed break from making music or do you find it comes from the same well of inspiration?
It’s the same kind of thing for me. You don’t take on the whole novel at once. You do it in bits and then you see what you’ve got after you’ve been at it for a while. Just like an album.

4. Your bio says you’ve written scripts for Sesame Street. What kind of things did you write for the show?
For about five years I wrote sketches for CBC’s Sesame Park. Around 30 of them. Of those, five or so got picked up by the New York Sesame Street. One thing I’m proud of was an animated short called “Alison’s Magic Kettle,” the first kids’ TV depiction of same-sex couples raising children ever aired, anywhere. It played once, got complaints, and the CBC chickened out and pulled it from the air. I complained to the press, it got some coverage, and Sesame Park never let me write for them again. Oh, CBC. Why aren’t you braver, when they’re just going to kick the sh** out of you anyway?

5. How many accordions do you own?
I own three. But the only one I play on stage is Estella, which I’ve had since 1999, and that’s the only one I’ve ever played on stage since I found her. Estella was made in Castelfidardo, Italy, where all the best accordions are made, by the Quagliardi Company, probably some time in the ’60s. She is beautiful.

6. Would it be accurate to say that playing accordion has opened some doors for you and led to musical opportunities that you wouldn’t have been afforded if you were some dude with an acoustic guitar?
Festivals like to book acts like they’re laying out a buffet table. So when they see the accordion singer/songwriter, they sometimes say, “Oh, we don’t have one of those.” That’s been helpful. Also, when I started out, the accordion was so maligned in North American pop culture that the simple fact of “Oh look, he plays the accordion! What?” was enough to get stunned articles in the newspapers in the cities I played.

7. Why do you think you have a particularly strong following in some Scandinavian countries?
That’s where I got my first foothold in Europe. Largely because one of their biggest bands, Kaizers Orchestra, championed my work and had me open for them a lot. They recently did a nine-night run of sold-out shows at a stadium in Norway, playing to 8,000 people a night. I was an opening act at three of them. So that’s a stroke of good fortune.
Scandinavians have high income tax and high corporate tax rates. That means that they live better lives, with a bigger middle class, higher life expectancy, wider and better education, long fully paid parental leave. It’s that simple, folks. So with a bigger, leftier, better-educated, English-speaking demographic of folks with money in their pocket, that’s a pretty good market for a guy like me who’s a weird lefty folksinger trying to write with some degree of literacy.

8. Have you suffered any accordion related injuries over the years?
Nope. I owe it all to my practice regime, in that I don’t practise very much at all.

9. What do you do for fun and relaxation when you are not making music or writing books?
I read books and listen to music.

10. I imagine you have enough colourful anecdotes as a musician to write your own memoir. Does that interest you?
No. I like being licensed to lie.

Geoff Berner performs at the WISE Hall, Nov. 30, 8 p.m. with guests e.s.l. and the Burnettes. Tickets at eventbrite.ca.