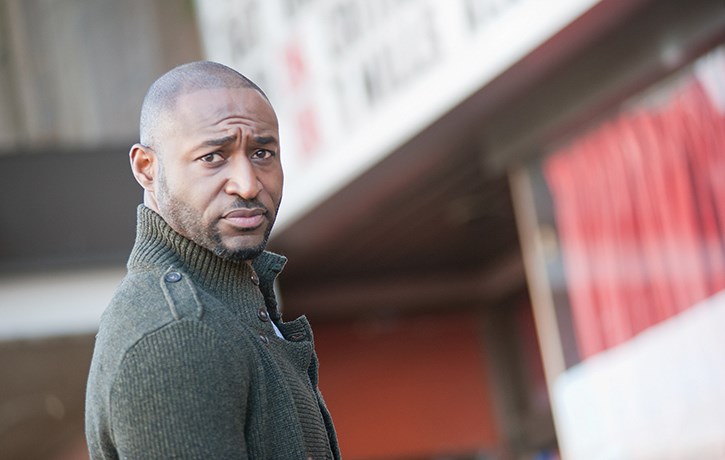 “I’m the Malcolm X of street cops: by any means necessary, I will get the job done,” Vancouver actor Adrian Holmes says of his new role on Bravo’s 19-2.Rob Newell

It’s only March, but already Adrian Holmes can say that 2014 is one of the best years of his life.

After more than two decades in showbiz, the Vancouver-based actor is headlining his own series: 19-2, a searing drama about a pair of flawed cops working the heaving streets of Montreal. The show smashed Bravo’s original series ratings records when it premiered in January.

Holmes is Nick Barron, a take-no-prisoners SOB whose last partner was shot in the face after Nick refused to call for backup.

“[Nick's] the Malcolm X of street cops: by any means necessary, [he] will get the job done,” Holmes says during an interview at Milano Coffee’s Gastown location in mid-February.

Jared Keeso portrays Nick’s new partner, Ben Chartier, a by-the-book cop from the countryside wrestling with his own demons. Naturally, the partners don’t take to each other immediately, which is ironic considering Holmes and Keeso are long-time friends in real life.

19-2 is an English adaptation of a French-Canadian hit. In the original version, the Nick character is portrayed by a Caucasian actor. “Everybody can relate to what Nick’s gone through,” says Holmes, who also has recurring roles on Continuum and Arrow. “He’s just a man, and we need more colour-blind casting. I think we’re making some serious headway with this show.”

Holmes is a passionate believer in intention: if we want something — like a regular gig on a hard-hitting police drama — and are willing to direct all of our energy towards it, then there’s no reason it can’t be ours.

It would all sound rather airy if the supporting evidence wasn’t actually present in Holmes’ own life. “Jared and I were in Mexico City shooting Elysium, and I said to him, ‘Wouldn’t it be cool if we did a cop show? Wouldn’t it be cool if we had our own show? We work together so well and it’s time we had our own show, something with cops like Bad Boys or Training Day,’” he recalls, laughing. “I swear to God, I said those words, and here we are. Where focus goes, energy flows.”

This intention-to-reality belief is the reason that he was reluctant to listen to his mother and pursue her career — nursing — as a fallback. “My motto was always, ‘I don’t plan on falling back; I only believe in falling forward,’” he says.

But he took his mother’s advice anyway and studied nursing at Langara College. His work-studies took him to orthopedics at St. Paul’s, obstetrics at Surrey Memorial, pediatrics at Mount Saint Joseph, and the spine unit at Vancouver General Hospital, which he describes as “a real tough ward. I saw so many young people coming in with these recreational injuries,” he says. “However, what it does is it humbles you and it really makes you appreciate every little thing that you have. I catch myself when I complain now.”

Although his acting career took off as soon as he completed his nursing studies, Holmes doesn’t regret taking the time to cultivate a fallback. “[My family was] happy that they got me to do the fallback, and I’m happy that I got to live my dream and actually get to work doing what I love.”

And what he loves is 19-2, and filming in Montreal, and the time he’s spent in Nick’s head, however grueling it can be. Nick and Ben routinely battle a host of baddies: rapists, gangsters, serial abusers, junkies, armed robbers, and other ne’er-do-wells who would do harm to themselves and other Montrealers if it weren’t for car 19-2.

“It’s mentally and physically draining, when you have to go to those places in your head take after take, hour after hour,” says Holmes. “Adrenaline is keeping you going, but at the end of the day, you’re taxed.”

But gratitude buoys him. “I’ve been in this business for 23 years, and all of this time has really prepared me for a moment like this.”