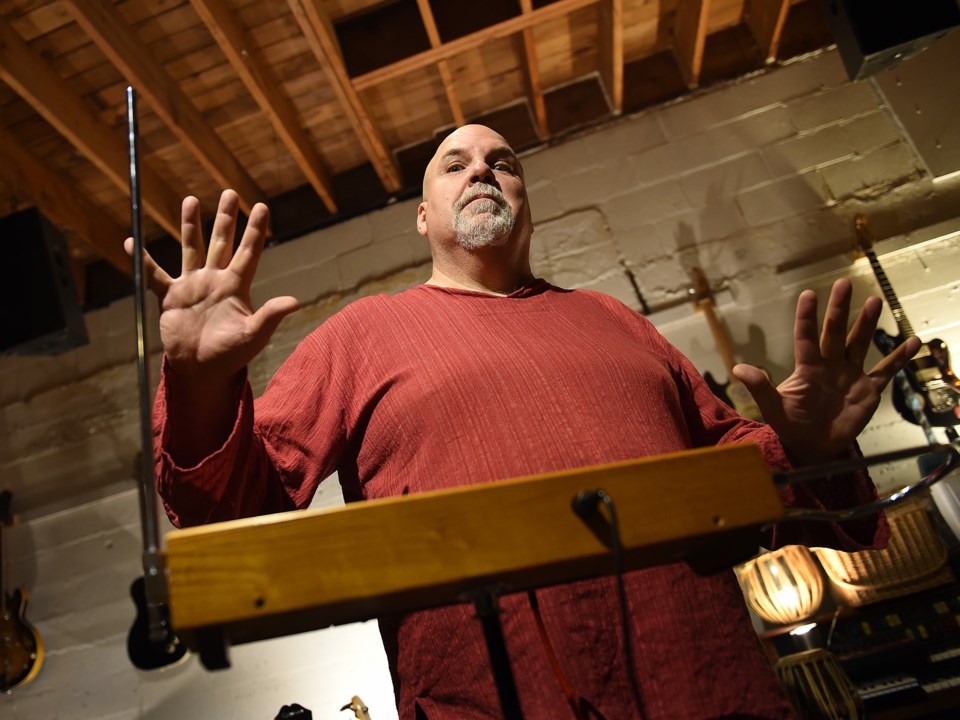 Stephen Hamm has played in a lot of Vancouver bands over the years, but his latest pursuit is a one-man band showcasing his chops on the misunderstood theremin. Photo Dan Toulgoet

Few musicians have been in as many bands as Stephen Hamm. So many that the imposing bassist’s resumé reads like an abridged history of Vancouver’s independent music scene: Slow, Tankhog, Ogre, Roots Roundup, Jungle, Canned Hamm, the Power Failures, Sunday Morning, the Evaporators.

Now, Hamm has opened his mind’s eye to focus on more solitary pursuits — namely his one-man band and new album, Theremin Man, which, as the name suggests, showcases the misunderstood early 20th century electronic instrument known as the theremin.

Patented in 1928 by Russian inventor Léon Theremin, the futuristic sounding device relies on two metal antennas that react to the position of the performer’s hands, which control pitch and volume without actually touching the instrument. The result is a ghostly, voice-like sound, which seemed custom-made for campy 1950s sci-fi movies such as The Day the Earth Stood Still and Forbidden Planet. The Beach Boys’ single “Good Vibrations” and the theme from the original Star Trek TV show are often wrongly cited for featuring the theremin, while guitarist Jimmy Page notably dabbled with one in Led Zeppelin’s concert film The Song Remains the Same.

For Hamm, playing the theremin began more as a diversion when, five years ago, he found for the first time in his life he wasn’t in a band.

“I love collaborating with people, but after this long career or whatever I’ve had, this time I just wanted to do something by myself,” Hamm says.

WATCH VIDEO OF HAMM PLAYING THE THEREMIN BELOW:

So he began teaching himself the unruly instrument via YouTube videos and incorporating it in his solo performances for added flare. Gradually, however, it began to seep into the forefront of his music.

“The instrument started to speak to me,” says Hamm. “It sounds like it’s from another world... It’s music from the ether.”

Two summers ago, Hamm took the plunge into full-blown theremin devotee — travelling to France for a weeklong music academy featuring theremin master Carolina Eyck. All of which invites the question, what kind of people attend a weeklong theremin academy in France?

“There are people from classical backgrounds,” says Hamm, “there was a guy from Paris who was an electronic nerd, there were a bunch of moms and dads, there was a cool kid from Switzerland who was into punk rock, a guy from Spain — from all over Europe all these oddballs and just lovely people,” says Hamm.

If Hamm sounds like he’s achieved a level of Zen through his theremin-fuelled journey across the cosmos, that’s because he has. The veteran musician is even comfortable admitting his new album has a distinct New Age vibe to it, particularly the droney, psychedelic single “Space Sister.”

“Oh yeah,” says Hamm enthusiastically when pressed on his celestial explorations. “I’m a big meditator. I’m also very interested in the Unarious foundation, which is a group out of California and they are all about communing with the space brothers and creating art and finding your past lives through art.”

He adds, “But the instrument told me what it wants to play and that’s what came.”

Hamm says he also likes the portability and ease of being in a one-man band with a theremin under his arm. Although it might seem worlds away from his punk rock past, his new musical universe is not so distant, he says.

“As I get older, I realize that my time on this planet is finite, and I found I was able to re-establish a sense of play in my life, which had been missing for a while. [The theremin] allowed me to be a kid again and play. It allowed me to connect with why I started playing music in the first place, which is that place that’s like meditation. And this instrument is like meditation in that you get lost and your mind shuts off and that’s a fantastic thing. That’s the reason I played punk rock in the first place. Same thing. Shut your mind off.”