Travis Wall has the rare fortune of living a dream he’s had since childhood.
Mar 8, 2017 11:43 AM By: Sarah Ripplinger 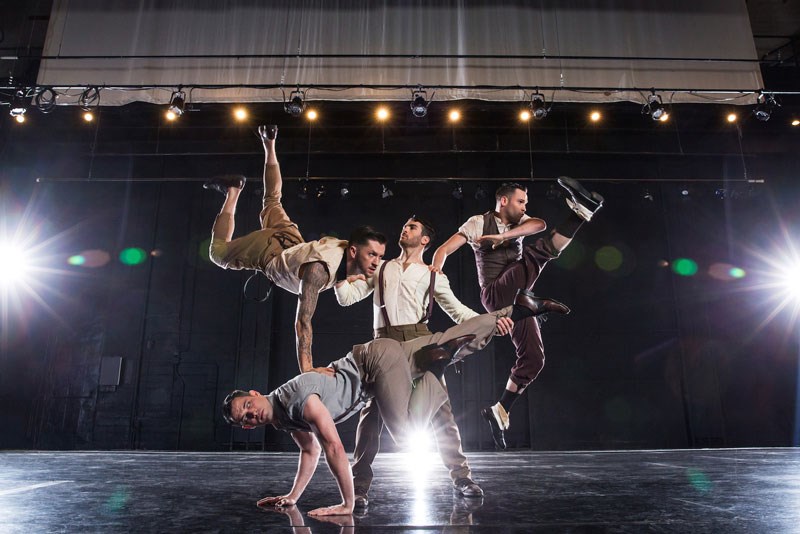 Travis Wall has the rare fortune of living a dream he’s had since childhood. In his latest production, Shaping Sound: After the Curtain, the accomplished dancer and choreographer draws from elements of his personal life to share a story about sexual acceptance and love.

Wall’s introduction to the rhythmic movements of dance began while he was still in the womb, in his birthplace of Virginia Beach, Va. His mother, a dance instructor, often placed baby Travis’s crib in her eponymously named studio Denise Wall's Dance Energy.

“The dance studio was my babysitter,” Wall said in a telephone interview from Los Angeles, where he’s now based. “I used to mimic the other dancers in the studio… and I haven’t stopped dancing since.”

Wall got his first big break when he landed a spot on a Dr. Pepper commercial at age nine. This exposure opened the door to more commercial work, prompting Wall to move to New York City at age 12 where he had his Broadway debut in the revival production of The Music Man.

“I was a kid in New York City,” said Wall somewhat wistfully. “That changed my life.”

Wall went on to win runner-up on the second season of So You Think You Can Dance, along with a 2015 Emmy for outstanding choreography and a Country Music Television award for choreographing Carrie Underwood’s “Something in the Water” music video.

For someone still in his 20s — Wall turns 30 in September — he has an enviable number of accomplishments already under his belt.

That’s not to say that he’s had it easy. Despite all the success, Wall has found himself “living paycheque to paycheque” in an industry where the demands for talent and time are often high.

“It’s the hardest thing in the world trying to maintain balance, stay healthy, come up for air at times… have a healthy relationship and lifestyle,” said Wall.

His solution? Use it.

“Instead of dwelling on my frustrations I get inspired by them and create from there.”

In After the Curtain — the second production from the Shaping Sound dance company Wall founded with partners Nick Lazzarini, Teddy Forance and Kyle Robinson in 2012 — Wall takes audiences to the opening night of a stage performance set in the 1940s. The protagonist, performed by Wall, struggles with the emotional turmoil of losing his true love and decides to reveal that he is gay to his cast members.

It’s a theme with personal undertones for Wall, who first realized he had feelings for another male on his 16th birthday. That was both a difficult and amazing time, said Wall, reflecting on how he had won a competition that year, was touring extensively and had a girlfriend at the time.

Wall turned to his art as an outlet for self-expression and emotional release, later incorporating LGBTQ narratives in his creative work and public life.

In a November 2016 MTV News video, Wall shared his experience of realizing he was gay and called for a broader cultural discussion about acceptance, particularly one that included youth.

A 2014 So You Think You Can Dance performance choreographed by Wall featured same-sex couples — a first for the show — and advocated for equal marriage rights for all Americans. The performance earned Wall his fifth Emmy nomination, and he went on to win the coveted prize for another routine the next year.

That said, finding a platform for choreography that touched on LGBTQ themes has been a challenge, Wall said, particularly for routines of his destined for the small screen. Attitudes seem to be changing though, Wall added, and there is growing receptiveness among producers to depict LGBTQ subject matter on television and other platforms.

The fact that After the Curtain exposes audiences to LGBTQ culture is something that Wall believes can play an important role in dispelling false beliefs and negative views of people in the LGBTQ community.

The production shows the universal nature of love through a fusion of jazz, modern and hip hop performed by a cast of 12 dancers.

“This show is all about love is love is love,” said Wall, who got engaged to his partner of six years, UCLA gymnastics coach Dom Palange, last March. “I’m very fortunate to have this space to create this show… and not have to put a filter on anything.”

Shaping Sound: After the Curtain is at Queen Elizabeth Theatre on Saturday, Mar. 25. Tickets from ticketstonight.ca or 1-877-840-0457.