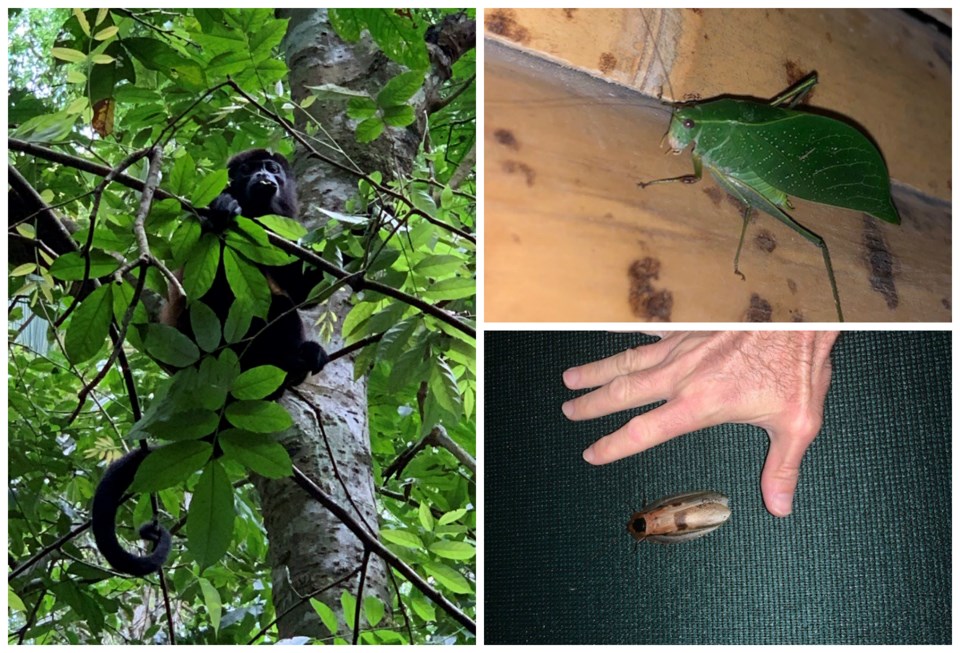 Grant Lawrence took his family to the wilds of Costa Rica over the holidays, with an emphasis on wild. Photos Grant Lawrence

After suffering through a long, drunken and dark holiday season in rainy Vancouver last year, I was more determined than ever to somehow, someway, get my family out of town for this year’s holiday break. Wherever we were going to go, it had to be cheaper than Hawaii. Both the savings and the planning began months ago.

After much hand-wringing and second-guessing, we finally decided upon a moderately priced open-air cabana, made almost entirely of bamboo, located in a remote coastal section of Costa Rican rainforest. And we’d bring our kids, who are six and four. Were we crazy? Maybe. But since those kids have been nature-tested repeatedly during summers in the coastal B.C. rainforest, we figured we were ready for the jungle.

The location we selected is incredibly rich in biodiversity: it is home to five per cent of planet’s flora and fauna, including more than 200 species of mammals, roughly half of which are bats. The area also offers over 225 different types of reptiles, more than 800 kinds of birds and more than 300,000 varieties of bugs, many of which we would become intimately acquainted with during our 10-day submersion.

A constant word of warning before our trip was to make sure we brought flashlights. In the tropics after sunset it gets dark very fast, and the last thing you want to do is step on a fer-de-lance pit viper, because it will indeed be the last thing you do.

We equipped our entire family with powerful headlamps, but once we finally arrived to our steamy open-air jungle cabana (that came completely as advertised) we quickly realized that old-fashioned flashlights held at waist height would have been much less — ahem — impactful than headlamps.

As you are likely aware, many nocturnal flying insects are attracted to light. Now picture some of those 300,000 or so jungle bugs on a wild collision course with your face. I found that out the hard way during our first night, while illuminating the book I was reading to my kids with the headlamp.

Moths, beetles and other unknown tropical flying insects of all kinds repeatedly smacked into me. Putting the moth in behemoth, you know they’re big when they come with horns. Many boasted bizarre, Transformers-like features. But it was a smaller, kamikaze-type moth that nailed me right in the eye. I instinctively closed my eye tightly and rubbed it, but my eye continued to feel irritated. Then it began to burn.

I rushed to the bathroom to wash my eye out. Upon closer inspection in the mirror, I saw something small, foreign, and moving. To my horror, I realized it was a fluttering wing, sticking out from under my lower eyelid.

The wounded moth (coincidentally also my ice hockey goalie nickname) was still in my eye and still alive. I folded my lower eyelid down and carefully plucked out the twitching creature from my eyeball. It flew away.

The following morning at 5 a.m., we were awoken to a chorus of deep, guttural roars. It was like nothing we had ever heard before, as if an army of angry orcs was descending upon us. My wife and I were petrified. Our kids slept through it.

It turned out to be what some refer to as the “rooster of the jungle”: the howler monkey, which creates an echoing bellow that sounds like it comes from something much larger than their relatively skinny three-foot-nothing frames.

We slowly became used to the ever-moving world around us. One night, as we were sitting down to dinner, my son pointed to a pair of my wife’s pants that were draped over a chair to dry. He shouted, “Dad! Watch out! It’s a scorpion!”

Sure enough, one chair over from my six-year-old son, was an uninvited dinner guest: crawling slowly up my wife’s pants was a large, black and utterly nasty looking four-inch scorpion, complete with coiled tail and front pincers.

After herding my family to other side of the cabana, I carefully picked up the pants from the end that didn’t contain the venomous insect and proceeded to throw both pants and scorpion out the window.

The next morning, I inspected the pants with a long stick. They were scorpion-free. As I turned to deliver the news, I had to step over a fist-sized tarantula to get back inside.