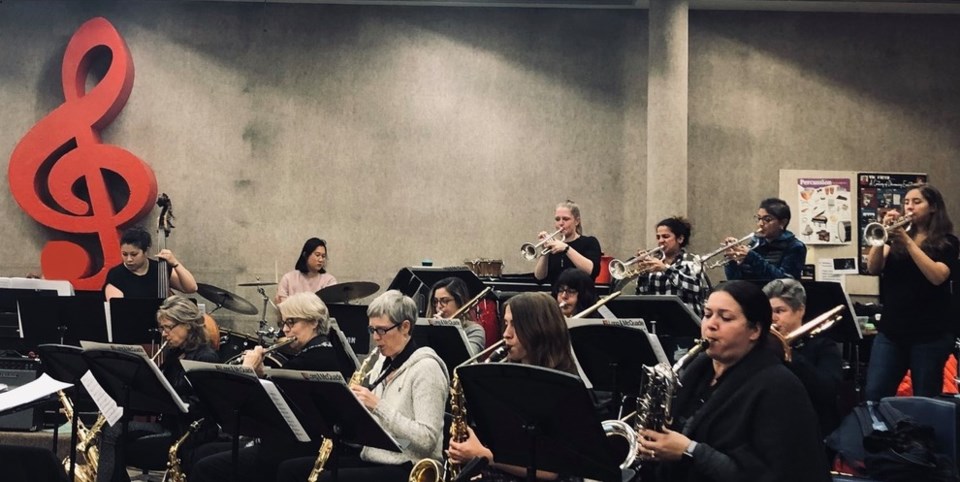 A newly formed ensemble is taking aim at the glass ceiling in the music industry.

Vancouver-based Sister Jazz Orchestra is the only all-female professional jazz orchestra in the country, and the group is making its debut Nov. 17 at the WestCoast Big Band Festival at the Croatian Cultural Centre.

“By bringing together 18 of Vancouver’s most accomplished female jazz artists into a powerhouse ensemble, SJO is going to enrich all lovers of jazz while helping young women see what they could be.”

A musician and community bandleader, Morrison said she’s been thinking about bringing together an all-female jazz ensemble for several years. She started playing trumpet at a young age and developed a love of the big band sound. However, Morrison said, it was discouraging to see so few women playing on stage in jazz orchestras.

That discouragement turned to disappointment as over the years she continued to see mostly men on stage.

“I finally decided it was the time to change things up and do something about it,” Morrison said.

The Sister Jazz Orchestra was born with a mission to provide visible role models for girls and young women interested in playing jazz.

“My school jazz programs have always attracted primarily boys,” said Natalie Prichard, a trombonist who has been teaching music for 25 years. “It’s absolutely critical for young female instrumentalists to see women playing in what has been a male-dominated field, and for boys to see this as normal too.

“Sister Jazz Orchestra has a fantastic opportunity to begin to change the demographic of instrumental jazz here in the Lower Mainland.”

The ensemble will make its debut Nov. 17 in the festival finale show at the WestCoast Big Band Festival, which Morrison co-founded in 2015.

For more information about Sister Jazz Orchestra, or for tickets to the Nov. 17 show, visit SisterJazzOrchestra.com.