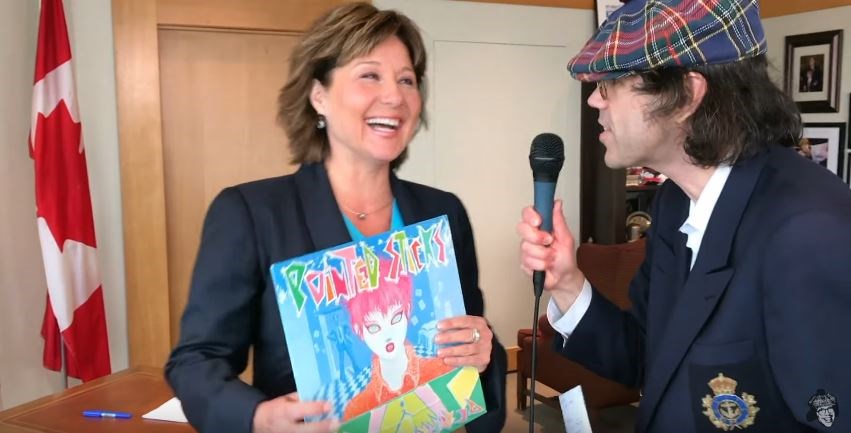 Last week, guerrilla journalist and media personality Nardwuar the Human Serviette subjected Premier Christy Clark to one of his patented videotaped interviews. He also jawed with provincial NDP leader John Horgan and Green leader Andrew Weaver. But it was Nardwuar’s Q&A with our effervescent premier that sent us into an emotional tailspin as the two talked about punk rock concerts, cool bands and the difference between B.C. Liberals and the Socreds. Here’s a detailed account of the five stages of grief we experienced over the course of the 16-minute interview.

Surely no one is going to be swayed by Clark’s easygoing smile, infectious laugh and supposed punk rock cred. And being able to riff on various underground bands does not excuse her government’s appalling record on child poverty, increased homelessness, public education, campaign finances… the list goes on. Are we expected forgive all that just because she claims to have seen DOA and Pointed Sticks back in the day? We bet she also listened to Billy Joel and Fleetwood Mac while narcing on her classmates for underage drinking. Though in retrospect, listening to Billy Joel and Fleetwood Mac sounds pretty cool, too. Damn.

This is such a blatant attempt to appeal to voters. How crass. We’ve never felt more disgusted in our entire lives. Except for that time one of our friends posted some video on Facebook that we can’t quite remember and we gave it a thumbs down emoji AND a burning-with-anger-face emoji. And why isn’t Nardwuar asking her the tough questions, like how is she able to sleep at night?

She saw the Replacements at the Town Pump? And did she just mention Stiff Little Fingers? You know, politics aside, she’d probably be an alright person to have a beer with. We could talk music and maybe casually suggest to her that it’s time her government raised welfare rates and stopped being d-bags about public education. She’d listen to us, wouldn’t she? She likes the Specials and the Clash, after all. She can’t be that bad.

We hate ourselves so much right now. How could we have been so easily seduced? We’re just as bad as the people who voted for Trump. Maybe we shouldn’t have watched Nardwuar’s interview with NDP leader John Horgan. That dude thinks it’s cool to own a Greatest Speeches of Tommy Douglas album.

It is what it is. Clark is a former broadcaster who is exceedingly comfortable in front of a camera and microphone. She grew up in Metro Vancouver and was savvy enough to see some decent bands in her youth. These things have nothing to do with her politics. Voters can separate the two — can’t they? — and base their decision on policy rather than personality? And if not, it’s not the end of the world. At least the Canucks can’t break our hearts until next year. Namaste.