They say friends who play together, stay together. But what about the friends who grow up a few blocks apart, discover jazz music together, and eventually go on to curate a world-renowned international music festival?

Such is the case for John Orysik and Ken Pickering, co-founders of the TD Vancouver International Jazz Festival, who are kicking off the event’s 30th incarnation today (June 18).

In case you haven’t guessed it, they’ve stayed together.

The pair have been best buddies since the second grade, and came to bond over their mutual love of jazz. Now – more than four decades later – they run Coastal Jazz and Blues Society, the not-for-profit organization responsible for the distinguished annual festival (and several other concerts year-round, to boot).

This time of year, the guys don’t get out of the office much, except to grab an espresso or two at their favourite nearby java joint, Milano Coffee. With more than 300 shows coming up for the festival over two weeks, it’s not difficult to see why they have a lot of joe to drink, and a lot of buckling down to do.

“I think the jazz discovery, for me, happened around the age of 15, and I was immediately proselytizing for jazz. It was just the biggest thing in my life, and I became a bit of an evangelist,” says Pickering with a laugh.

Orysik’s love of the music coincided with Pickering’s, and the duo waxed philosophical on their walks to high school.

“John lived down by Rupert and Williams and I lived by Renfrew and Parker, and he would roll by and we would talk all the way to school about music and life and all that. I think John’s passion for jazz music began almost coincidentally with mine, just because I think we were very influenced by each other’s tastes — in music and life — in those tender teenage years.”

“It was a time of great discovery,” Orysik, media director of the society, adds in, noting that their developing values happened to parallel the basic values of jazz music.

“We were attracted to that, and there was so much variety, and it was coming from all over the world. Jazz is a global music, and we were listening to the artists that were coming to town that were important,” Orysik explains, adding that the duo even travelled across the border a few times to catch acts that didn’t stop in the rainy city.

Those were the elementary steps that would eventually lead to Pickering and Orysik forming Coastal Jazz. Pickering went on to fulfil one of his passions — opening up a jazz and blues record store in 1975 called Black Swan Records, while Orysik started writing about jazz for Coda Magazine.

In the meantime, the duo took advantage of co-op radio and started programming jazz in the early ‘80s, with Orysik eventually snagging a job at commercial radio station C-Jazz.

“So, jazz became this thread through our lives, in different areas, where we could express our knowledge and passion of it,” Orysik reveals.

“We wanted to create some kind of platform where our love for jazz and our knowledge of it could be shared through concerts and a festival, so make a long story short, we created Coastal Jazz with the idea of being able to present concerts year-round with an annual summer festival, and that’s kind of it.”

STARTING WITH A BANG

Enter the first, unofficial Vancouver Jazz Festival in 1985: a self-financed venture that ran out of the back office of Pickering’s Black Swan Records. The record shop, located at West 4th and Bayswater in Kitsilano, now stands as a Starbucks.

“We tend not to count our 1985 event, which was very small in nature, but it did enable us to attract corporate sponsorship and enabled us to really do a proper, full-size festival at Expo 86,” Pickering divulges.

That corporate sponsorship led to an 18-year relationship with Du Maurier, becoming known as the Du Maurier Vancouver International Jazz Festival until 2003 – the year tobacco companies were barred from advertising through sponsorship in Canada.

“That original deal was a one-year deal, and my memory of that period was ‘Oh my god, I can’t believe that we’re in a position to actually do an international jazz festival’ and [I was] totally wet behind the ears,” he says.

Going from zero to 60, the 1986 festival brought in acts such as Charlie Haden, Billy Higgins, Cedar Walton, Wynton Marsalis and Miles Davis.

The inaugural festival made headlines worldwide after the infamous showdown between Miles Davis and Wynton Marsalis, in which the young trumpeter rushed the stage during Davis’ set.

“Wynton more than anyone was feuding with Miles and calling him names in the press, and then he basically tried to crash [Miles’] show and Miles wasn’t having anything to do with it. Next thing you know, calls were coming in from New York saying, ‘What happened? What’s going on there?’ And then Miles put the incident in his autobiography. They’re still talking about Miles Davis and Wynton in Vancouver 30 years later, so that is something that I just love to hear about,” Orysik says with a chuckle.

“It was the major international jazz incident of our time,” Pickering exclaims, “but here’s the irony: I think I was at the Jim Byrnes show across town because we divided up.”

His co-founder, however, was right in the middle of the action.

GROWING UP AND ALL THAT JAZZ

Each year, the festival has expanded and along with it, the Coastal Jazz and Blues Society.

From its humble beginnings in Gastown that saw Water Street closed for a weekend, to becoming an iconic downtown festival that spans over two weeks, Pickering and Orysik assert the Vancouver International Jazz Festival’s trajectory mirrors the basic tenets of jazz music itself.

“The basic mission of the festival has always remained true and that’s to present a wide variety of music within the jazz and improv music field but also bring in hybrid forms as well. Over the years, we’ve been able to present …the real innovative cutting edge musicians – both from a local point of view and an international point of view,” says Orysik.

The Jazz Festival happily charges itself with watering local seeds, having had Nanaimo-born Diana Krall kick off her career during one of the many free performances, and inviting young, resident talent such as Jaclyn Guillou and the Kate Hammett-Vaughan Quintet to perform at the giant fete.

“We’ve kind of grown slowly and incrementally and made impacts along the way because we’ve been pioneers in terms of creating community, raising the artistic level of creativity in Vancouver, fostering social development, bringing people together from different backgrounds and genders and cultural backgrounds and things like that. The festival has really been a cultural leader,” Orysik affirms.

And, as the City of Vancouver’s multicultural landscape grows, so, too, does the Jazz Fest.

“I was just looking at the program and just analysing the international component of what we do, and there are 25 countries represented in this 30th anniversary program,” says Pickering, who’s also made a point to include the South Africa Now! concert series within this year’s programme.

“The city has changed demographically. When we started in the mid-‘80s, it was a different city. There’s been more immigration, it’s different. I think the festival reflects all that,” says Orysik. “We have strong Asian programs, we have strong European programs…”

Cultural diversity isn’t the only way Coastal Jazz is creating an inclusive festival. A big feature of the multi-venue event is providing free performances — something that was important to Orysik and Pickering from day one.

“Accessibility is something that is completely built into what we do. We want to make sure that we can take music to people,” Orysik says. “If you buy tickets to the festival, and then augment it with free shows, then you’re getting an amazing experience.”

“Some of the bands that are playing [the free shows] could easily be ticketed… it’s so diverse and those are portals for people to enter the world of jazz. There’s no price barrier to experience the music. I think that’s one of the important rules that we apply, is creating that accessibility for the people of Vancouver and anybody that happens to be visiting,” he says.

And bringing the world together, musicians and audiences, to experience jazz? Priceless, says the duo.

“All of this reflects the pioneering element of Coastal Jazz,” says Orysik. “Always being ahead of the curve, always looking to bring these threads together in what, essentially, is a musical summit.”

So, as the Vancouver International Jazz Festival continues to reach new heights, the founders’ friendship won’t be going anywhere. After all, the friends who discover jazz together — well, we now know the rest. 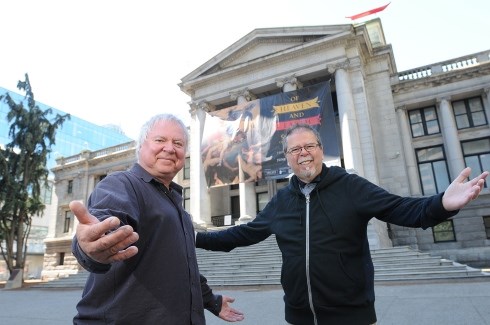