Fictionals launch local-version of Cards Against Humanity
Dec 13, 2017 8:00 AM By: John Kurucz 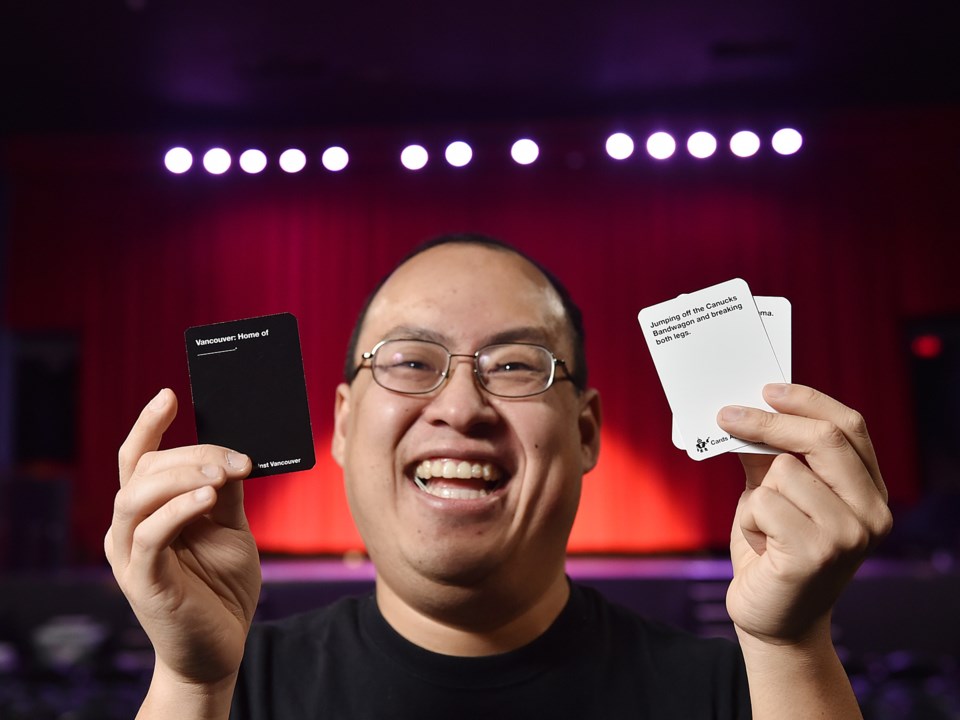 Take notice, residents of the 604.  Soon, you can add “most horrible person in Vancouver” to your mantelpiece.

All that and more can be yours Dec. 20 at the Rio Theatre, when the improv collective known as the Fictionals debuts the newest addition to its comedic arsenal: Cards Against Vancouver.

Featuring cards that both revile and revere life in Vancouver, the show will include more than 100 made-in-Vancouver tidbits: potshots at the Canucks and TransLink, or appreciation for Stanley Park and the Vancouver Grizzlies.

“Improv is inherently a group art form,” Fictionals co-founder Daniel Chai told the Courier. “There are solo and duo groups that do great work but I think improv is really fun when you get five, six or seven performers together on stage.”

The collective’s newest creation is taken from the uber popular game Cards Against Humanity, which is billed as a “party game for horrible people.” The game’s format involves a participant asking a question from a black card, which is then answered by those holding white cards. Humour, sometimes of the darkest nature, is encouraged.

That’s where the “most horrible person in Vancouver” distinction comes in. The Fictionals have held monthly Cards Against Humanity tournaments since 2012. Audience members participate until the raunchiest answers suss out the month’s most vile Vancouverite. The winning answers are then acted out by Fictionals members.

Since then, the Fictionals have taken note of audience contributions and member suggestions. More than 200 references were hatched before the master list was completed with 125 entries.

Not every suggestion made the final cut.

“There were quite a few variations around having sex in, or on, weird places throughout Vancouver — having sex in a Car2Go or having sex on top of the Lions Gate Bridge,” Chai said. “It sounds funny, but we also didn’t want to give anyone weird ideas.”

Not only will the Fictionals roll out their take on Vancouver live at the Rio, the group has also created a free download with all 125 cards, available online at thefictionals.com.