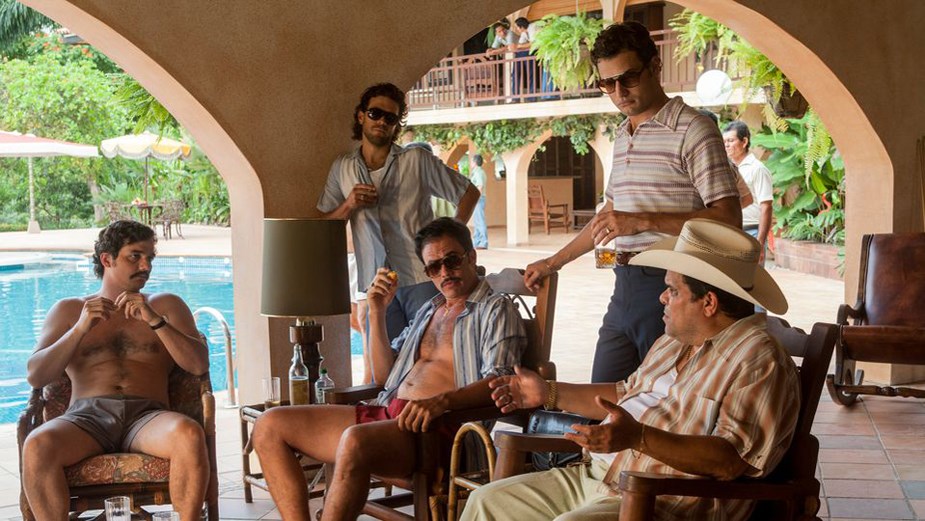 Juan Riedinger (standing in the back) appears as Carlos Lehder in Netflix's Narcos.

Juan Riedinger and Carlos Lehder both have German fathers and South American mothers, but that’s pretty much where the similarities begin and end.

In the 1980s, Lehder was a big player in the Colombian drug trade. He flew cocaine-packed planes for Pablo Escobar, the notorious kingpin of the Medellín Cartel.

Lehder somehow managed to love both John Lennon and Adolf Hitler (to display his adoration for the latter, he had a swastika tattooed on his arm). He’s currently serving life without parole (plus 135 years) in an American prison.

Riedinger, on the other hand, grew up in Banff and wanted to be a veterinarian, until he volunteered in a vet clinic during his post-secondary biology studies and realized how heartbreaking it can be to care for animals in crisis.

And so, via a winding journey that took him through English literature studies and the service industry, Riedinger ended up an actor and storyteller instead.

Narcos tells the larger story of Escobar – who, in 1987, was identified by Forbes Magazine as the 7th richest person on the planet, with a fortune of more than $30 billion USD – and his lengthy battle with Colombian and American authorities.

Brazilian actor Wagner Moura has already received a heap of praise for his portrayal of Escobar.

In Narcos, Riedinger plays Lehder, a man who is introduced on screen as “a crazy nutjob.”

“Carlos Leider is half German, half Colombian, and I’m half German, half Peruvian, so it’s very similar genetically, and I think that helped in a way,” says the Vancouver actor during an interview in his trailer on the set of Romeo Section, the upcoming CBC espionage drama from renowned showrunner Chris Haddock. “There’s a blood memory there.”

Riedinger is a veteran actor now (his long list of credits includes Jennifer’s Body, Fringe, Supernatural, and Leo Award-winning turns in R. L. Stine’s The Haunting Hour and the web series Pavement), but even veteran actors get asked to try something new from time to time.

And Narcos required him to do something he’s never done before: deliver a role entirely in Spanish.

“It was scary at first to act in Spanish, because I hadn’t really had the opportunity to do that before, but I feel like they were happy,” says Riedinger. “We had a dialect coach on this show to make us sound Colombian, which was really nice.”

Filming on location in Colombia meant that Riedinger got to see the historic South American country from all angles: from Medellín to Bogota, from the jungles that figured so prominently into Escobar’s empire, to an array of locales throughout Cartagena.

The role also required Riedinger to get high: as in, physically high. Lehder was a pilot, and in Narcos we see Riedinger at the helm of a small airplane.

He got a little more method with his piloting than he’d probably be allowed to in Canada.

“I don’t remember a single green screen on that show. It was one of those little passenger planes. We were up in the air. I was flying that thing. At times, it felt like a videogame,” laughs Riedinger.

“They had a co-pilot, but I had control of the plane at times. I was steering that thing in the air – which is the kind of stuff I don’t know you would get away with up here, and I loved every minute of it. It was such a rush.”

Much like his career. Riedinger’s journey to Narcos (and Romeo Section) has been built from a wealth of adrenaline-filled, eyebrow-raising moments: an audition for Godiva’s for which he spontaneously decided to freestyle rap in character (and won what ended up being a recurring role; he was working at Takis’ Taverna on Davie Street at the time); the two months he spent sleeping in his car in LA so that he could experience as many different sets as possible; the dozen or so short films he’s directed since 2008; that one week he learned editing in an Apple store.

“I signed up for AppleCare because we got a new computer, and I decided to take advantage of that,” says Riedinger, who edited the Vancouver-shot short Fade Out written and directed by his wife, actress and filmmaker Agam Darshi (Sanctuary, Played), as well as other projects.

“I went to the Apple store from opening until close for about a week, and I spent my entire day editing my short film in the Apple store so that I had somebody on standby every time I had a question.”

As for Romeo Section, Reel People will have a lot more about that new series closer to its October launch date, but in the meantime Riedinger reveals that “it [feels] like we’re shooting a cable show, in terms of the subject matter, and I feel like it’s really cutting edge for the Canadian market, and they’re really pushing boundaries with it,” says Riedinger. “They’re doing things that people aren’t used to seeing on Canadian networks.”