Musician and filmmaker tour the country by canoe in ‘Wild Ones’ 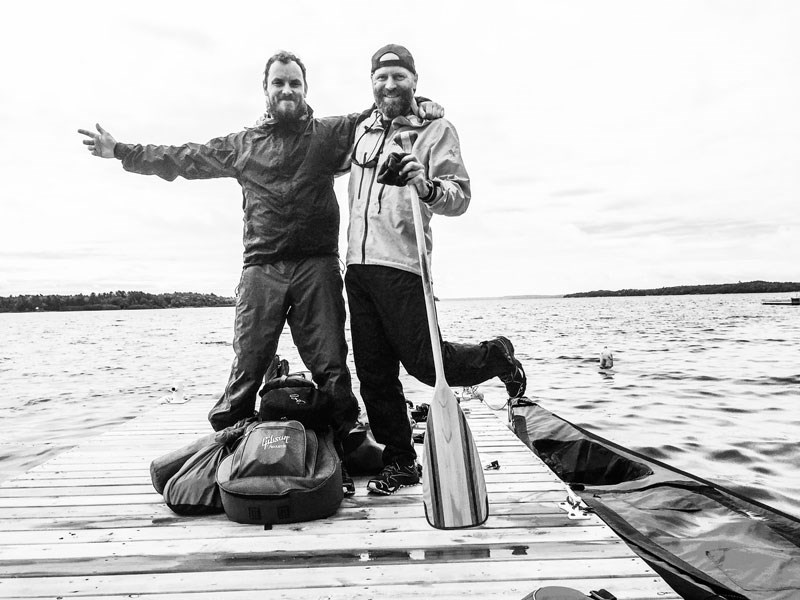 But the feature-length documentary– which has its world premiere this week at the 20th annual Vancouver International Mountain Film Festival – is more than a Canadiana highlight reel. It’s the true story of a contemplative musician (Toronto’s Peirson Ross) who decides to celebrate his new album with an unconventional tour, and an outdoor filmmaker (Vancouver’s own Frank Wolf) who tags along for the ride.

In 2015, Ross and Wolf (Borealis, Kitturiaq) embarked on a 750-kilometre tour to promote the release of Ross’s latest album (also entitled Wild Ones, which, according to Wolf’s voiceover in the film, celebrates “our wilderness and the oddballs of society”).

On this particular tour, the stereotypical beat-up van was replaced with what Wolf refers to in the film as “the most quintessential of Canadian vehicles: the canoe.” Using only paddle and portage power, and carrying little more than Ross’s guitar and ukelele, Wolf’s camera equipment, and some basic camping supplies, the duo travel to venues along the traditional waterways of Ontario and Quebec, and cap it all off with a concert in Ottawa on Canada Day.

“We set up these little venues in cottage towns and rafting towns, and we didn’t know where it would go,” says Wolf, who served as roadie, tour manager and director over the 24 days of travel and filming. “We just put ourselves out there. We had to go on faith that people would be there to listen.”

Wild Ones isn’t Wolf’s first work of outdoor documentary. He was host, director and director of photography on the Canadian adventure series X-Quest, and he biked, hiked, rafted and kayaked the GPS track of the Northern Gateway Pipeline in On the Line, his feature-length documentary that screened at the 2011 Vancouver International Film Festival. On the Line also marked Ross’s and Wolf’s first film-related collaboration: Ross’s music can be heard in the film.

Cut to a friendly catch-up a few years later, when “literally over beers one night, we came up with this idea: ‘Why don’t we tour your album and use a canoe instead of a van?’” Wolf recalls, chuckling. “With very little funding, we pulled the canoe out from under my cottage and started paddling.”

Tour stops included the village of Nobel, Ontario, where Ross played an intimate living-room concert, and Massasauga Provincial Park, where Wolf filmed Ross bobbing in the lake and recharging for the travel day ahead. “The kind of filmmaking I do, it’s very reactive,” says Wolf. “The story will materialize from the experience, so you can’t expect anything, you can’t force anything. We just had to be open to the moment and let the experience roll.”

Wild Ones, the album, is a tribute to people who don’t live within the paradigm of contemporary life, and its cinematic counterpart introduces viewers to those individuals – people like Dave Rogers, an 80-year-old wood carver and jug player who invites Wolf and Ross to stay in his guest room after discovering them settling in for the night on the edge of his property. Ross jams with Rogers and his wife as the couple play ragtime music on their homemade instruments, and “Peirson ends up doing a three-song set just for them, in this cozy cabin on the Ottawa River,” recalls Wolf. “It was one of those unscripted and unplanned interactions that end up being the most special, because we were all open to the moment. ”

The Vancouver International Mountain Film Festival screens 97 outdoor- and mountaineering-focused films from 18 countries, including six world premieres and 21 North American premieres. The festival opens with Tupendeo, about a Swiss climbing team’s face-off with a mountain in India, and closes with North of Known, about professional paragliders and adventurers attempting a full, unsupported traverse of the Alaska Range by foot and paraglider. The schedule also includes To the Ends of the Earth from Vancouver director Lavallee. The feature-length documentary – which is narrated by Emma Thompson and won Best International Environmental Film at the 2016 Doc LA Film Festival – gives voice to concerned citizens living at the frontiers of extreme oil and gas extraction.

The Vancouver International Mountain Film Festival runs Feb. 10-18 at locations around the GVRD, including the Rio Theatre, the Cinematheque, Centennial Theatre and Frederic Wood Theatre. Tickets and full program info at VIMFF.org.