'No Fun City' no more: Burger Fest is a meaty feast for the ears

Burger Fest 2016 has little to do with burgers. Sure, burgers will be available, provided by Vera’s and the Heatley, in both beefy and vegetarian options. But the event ­– taking place on Aug.
Aug 9, 2016 2:04 PM By: Allan Macinnis 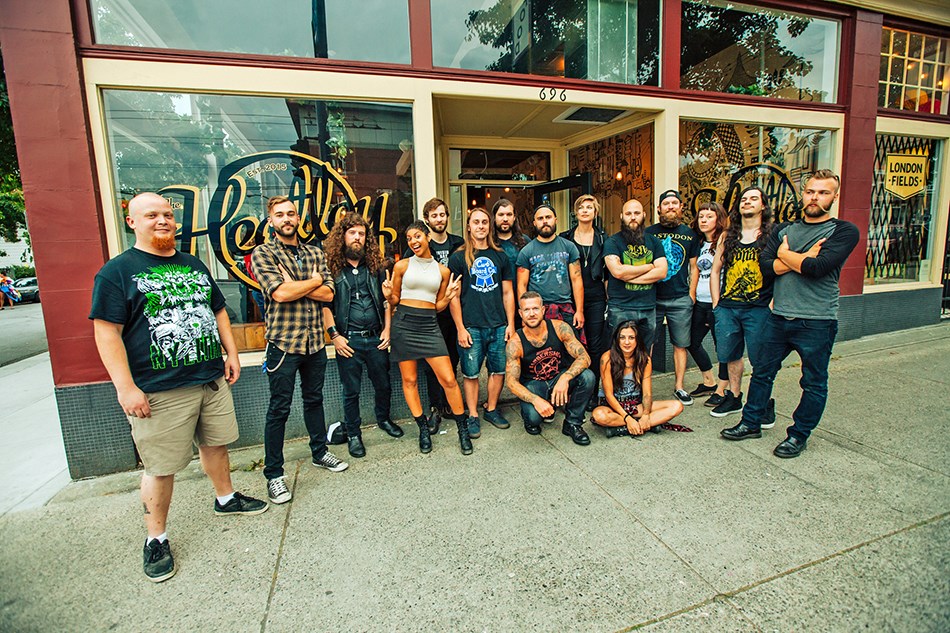 Burger Fest 2016 has little to do with burgers.

Sure, burgers will be available, provided by Vera’s and the Heatley, in both beefy and vegetarian options. But the event ­– taking place on Aug. 13 at the Waldorf, starting at noon and running til late – is really all about music. Specifically, bone-crunching, face-melting metal: thrash, doom, stoner, sludge, and permutations of all the above, with five visiting guests, like Portland-based headliners Lord Dying, and a staggering 13 local metal acts proving just how vital the Vancouver heavy music scene is.

Funny, because it seems like just a few years ago, there was a definite shortage of heavy music in Vancouver. As the city shifted priorities in the run-up to the 2010 Olympics, the tag “No Fun City” seemed apt, and even was the title of a documentary about venue closures and challenges to Vancouverites wanting to put on shows.

Mitch Ray, of Art Signified, who is co-promoting the festival, agrees. “That was around the time when Pub 340 closed down, and when the Cobalt went through a change,” he remembers. “Those were definitely the two go-to heavy music venues in the town.”

Then-Cobalt impresario wendythirteen’s heart-wrenching ordeal, leading up to her being shown the door, is figured prominently in the No Fun City doc, as are the closures of the Emergency Room and the Sweatshop. They weren’t the only local music venues to bite the dust at that time, either.

“There was a bit of a cleaning up, for the sake of the optics of it,” Ray remembers. “When Pub 340 stopped putting on live shows,” – leaving Ray struggling to find a venue for an early gig he promoted – “it was because of noise; because of that nice new apartment complex at the Woodwards’ building. A grimy little hole-in-the-wall metal bar down the street from new apartments isn’t exactly good for public perception, depending on who you ask.”

Rob Zawistowski of Astrakhan, one of the local bands playing Burger Fest, adds that “another really big thing is promoters. For quite a while, there were no really legitimate artist-focused promoters. With the growth of the metal scene, and some local bands getting signed and getting a little bit of support, there’s emerged a bigger interest on the promoters’ side to focus on artists. You have companies like Art Signified, what Chris Dyck was doing with Nothing is Heavy, and now also Modified Ghost.”

Add festivals like this one, and increased international interest in Vancouver metal, and you see the music scene being given “a huge boost” in Vancouver. “And I think the other thing is, people are having fun at shows and going out more!”

Astrakhan’s new LP, Reward in Purpose, is a testament to how exciting a genre metal can be – as psychedelic and proggy as it is heavy. The title, Zawistowski explains, is “related to the reasons why we play music. The content is based on our life philosophies and a thoughtfulness in general to how we approach society and music. Reward in Purpose is basically saying there’s a joy and a benefit that you get from the act of doing something that you’re passionate about, rather than trying to attain an end goal. It’s the importance of being focused on something and being engaged in the process of creation.”

By virtue of it not being so end-driven, Zawistowski thinks there’s a “purity in metal” that he finds inspiring. “Metal bands are not trying to get platinum records or get some crazy fame or money,” he says. “They’re doing it for a different motive, you know?”

Another especially exciting local band on the bill is Waingro, named for the treacherous sleazeball in Michael Mann’s crime thriller Heat. Guitarist/vocalist Brian Sepanzyk maybe isn’t quite as overtly philosophical as Zawistowski; he says that he started Waingro out of the desire to have fun, without “thinking about it too much: you like the riff, and you just play.” Still, there’s a huge charm to his Dimebag-meets-Stevie Ray Vaughan approach, which combines driving thrash riffage with bluesy, tuneful stoner-metal solos that set your synapses tingling.

The name of Waingro’s new album, Mt. Hood, comes from Sepanzyk’s internet browsing, where he “just kept coming across” references to the landmark. “The first time I saw it, I was like, ‘Holy fuck, that’s a wicked name for a mountain.’ It’s so ominous!”

Then Sepanzyk was researching what the locations were for Stanley Kubrick’s The Shining, and discovered that exteriors for the Overlook Hotel were shot there. That was the kicker, he says, with a grin and a shrug. “I really like movies." (Fellow film geeks will also recognize references to Saul Bass’ trippy ants-versus-humans SF film Phase IV in the album’s cover art and inserts,

Waingro has played two out of three Burger Fests since Art Signified got involved three years ago. Astrakhan, meanwhile, has played all three fests since then, and even cast Mitch Ray in their video for “Turgid Waters,” where he appears as a culty Shoko Asahara lookalike, until a member of the band bashes him in the head with a rock.

So, how did an all-day metal show get the name Burger Fest, anyhow? Ray explains that the answer lies in the fests origins, with co-promoter Scott Bartlett, of Black River Productions. “He’s the one who started Burger Fest six years ago, and it was originally just a backyard barbecue. It started as an outlet for his friend’s bands to have a fun summer party, and it kind of just developed.”

It’s a bit weird – especially with Taco Fest and Victoria’s Shake! Fest – to have a metal festival named after a foodstuff, isn’t it?

Ray nods. “We’re actually changing the name next year for that reason!”

More information on Burger Fest 6’s lineup can be found at https://signedevents.com/canada/vancouver/burger-fest-vol-6/