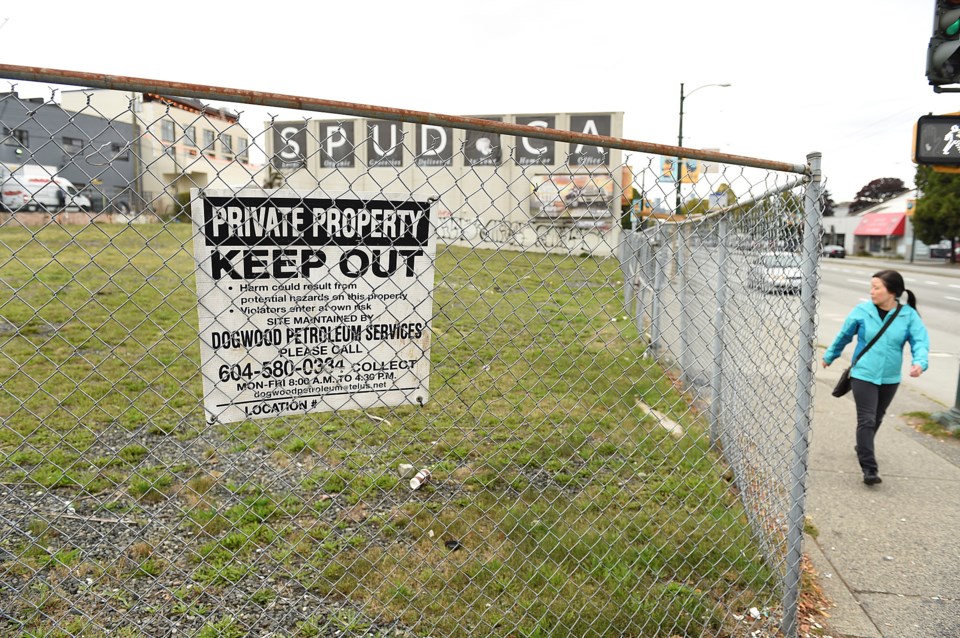 Suncor Energy is expected to announce Wednesday that it will donate a former gas station site at Commercial Drive and East Hastings to help the Urban Native Youth Association get a “state of the art” native youth centre built.The project is slated to include housing. Photo Dan Toulgoet

A representative from one of the world’s biggest oil producers will be at city hall Wednesday to announce the company will donate a former gas station site towards the construction of a long-awaited $30-million native youth centre planned for Commercial Drive and East Hastings.

Details of Calgary-based Suncor Energy's involvement in the project will be released during a morning presentation to city council, which will also hear from Mukhtar Latif, the city’s chief housing officer, and Dena Klashinsky, the executive director of the Urban Native Youth Association.

Nicole Fisher, a spokesperson for Suncor, said in an email to the Courier that the corner lot was originally committed to the project in 2005 by Petro-Canada, which owned the former gas station site at Commercial Drive and East Hastings. Suncor and Petro-Canada merged in 2009.

“Suncor is partnering with the City of Vancouver and UNYA on this donation,” Fisher wrote. “We are looking forward to continuing to collaborate with UNYA to ensure that the full vision for the native youth centre is realized. In terms of the dollar amount, that information will be available following the formal presentation on Wednesday.”

Latif and Klashinsky declined to provide further details on the extent of the donation from Suncor, until after the presentation to council. The native youth centre has been planned for more than a decade and was estimated to cost $30 million when the price was calculated in 2005.

All three levels of government were initially involved in the project. But it’s unclear how much money was committed to construction and why the project never got built by the anticipated 2008 completion date.

The initial design of the new centre called for enough space to build three storeys and take up two-thirds of the block along East Hastings at Commercial Drive. The Urban Native Youth Association owns its building along the block and the city owns the neighbouring building currently occupied by Spud.ca, an organic grocery delivery service. The former gas station site is on the corner of the block.

In January, council heard city staff was still working on getting a “state of the art” native youth centre built on the block. The project is expected to include housing, possibly up to 200 units for a mix of households, including young Aboriginal people and their families.

Suncor’s involvement in the project comes two weeks after First Nations and Tribal chiefs in B.C. and Quebec signed a pledge Sept. 22 to stop all tar sands pipeline projects. The leaders committed campaign against all five current tar sands pipeline and tanker project proposals in Canada, including the Kinder Morgan project that calls for a new pipeline from Alberta to Burrard Inlet.

The optics of an oil giant getting involved in a project to benefit young indigenous people was not lost on Green Party Coun. Adriane Carr, who said such a donation is difficult to reconcile when city council committed to becoming “the greenest city in the world” by 2020 and having 100 per cent of its energy generated through renewable sources before 2050.

Mayor Gregor Robertson and the three local nations – the Musqueam, Squamish and Tsleil-Waututh – have also been vehement in their opposition to Kinder Morgan’s proposal to build a pipeline from Alberta to Burrard Inlet. Robertson and the three nations took their protest to Ottawa this summer. An oil spill in Vancouver waters, they have said, would be disastrous for the environment and economy.

“Certainly, having a native youth centre and housing project is good for the city,” Carr said. “I’ll be very interested to hear what the rationale is behind the funding.”

Suncor has four oil and gas terminals in B.C., including a terminal adjacent to Burrard Inlet. It receives fuel from two Edmonton refineries and international suppliers, processes it and distributes to customers in Metro Vancouver and internationally.

Vision Coun. Andrea Reimer said council remains opposed to the expansion of fossil fuel infrastructure but sees Suncor’s donation of land as a positive move in the city’s renewable energy goal and its efforts to build more housing and reconcile with Aboriginal peoples.

“The story about a former gas station being turned into 200-plus units of housing for Aboriginal people is an excellent chapter in that story about that transition to 100 per cent [renewable energy],” she said. “I do not personally have an issue with it. It’s not a case of we went out across Canada and solicited a partnership and this is the one that showed up.”

Reimer said it made sense for the city to negotiate with Suncor to acquire the property because it is adjacent to the city-owned land and the piece owned by the Urban Native Youth Association. She said the best possible option was to have Suncor donate the land for a project that will benefit young Aboriginal peoples, the fastest growing demographic in B.C.

“There’s only two ways to get [Suncor’s property], and both of them involve money and Suncor,” she said. “So with this model, I feel like the taxpayers are getting the best deal.”