REVIEW: 'Angels in America: Perestroika' is made in heaven 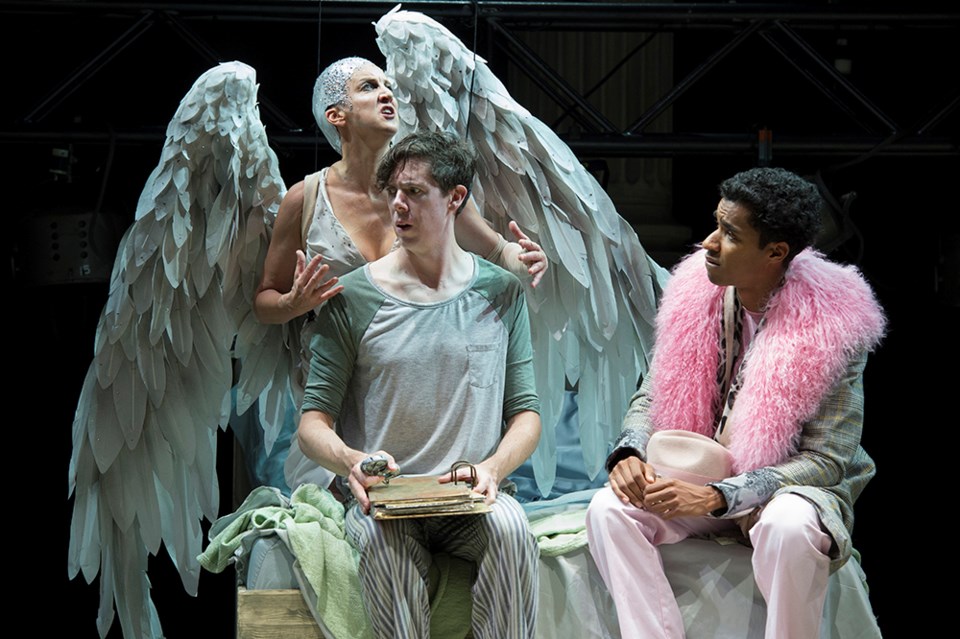 Tony Kushner’s Angels in America, subtitled A Gay Fantasia on National Themes, is a sprawling, epic, two-part play that is both reverent and irreverent, brutal and tender, serious and sardonic. It’s also the most celebrated, most theatrical look at what it was like to be homosexual back in Ronald Reagan’s USA.

Part One: Millennium Approaches, produced by the Arts Club under Kim Collier’s imaginative direction in March 2017, set the stage: two couples – gay lovers Prior and Louis, and Mormon husband and wife Harper and Joe Pitt.

Prior is dying of AIDS and Louis, unwilling to watch Prior die a pain-wracked death, abandons him.

The other couple is also in trouble: Harper is miserable in her marriage to Joe, who secretly suspects he is gay but knows he can’t be both Mormon and homosexual.

At the end of Part One, an angel descends into Prior’s hospital room to tell him he is a prophet. “The Great Work has begun”, the angel announces. Prior does not know what that means, nor do we.

Part Two: Perestroika picks up where Part One left off. Joe has begun an affair with Louis; Valium-addicted Harper has lost her grip on reality; and Prior, in hospital, is being cared for by his friend and ex-lover Belize, an African-American nurse.

Prior, covered in sores and deteriorating rapidly, has begun hallucinating and at one point, his fantasy intersects with one of Harper’s. Impossible, we know.

In the midst of all these entanglements is a real-life character, controversial lawyer Roy M. Cohn, who is also dying of AIDS but, in order to conceal his homosexuality, claims he has cancer. So riveting is Brian Markinson’s performance, there are times when Cohn – a cohort of Joseph McCarthy and J. Edgar Hoover – seems to be the main character. At other times, it feels like Cohn is the object of Kushner’s personal vendetta and the raison d’etre for the play.

The ghost of Ethel Rosenberg – convicted of and executed for espionage as a result of Cohn’s questionable arguments – haunts the play. Does he feel remorse? The word is not in Cohn’s vocabulary.

Performances are superb: Damien Atkins is an appealing, lost and terrified Prior who, in spite of everything, retains his sense of irony and deathbed humour. Ryan Beil, as Louis, regains some ground at the end of the play but his callous, self-absorption causes too much heartache for us to feel much sympathy for him.

As Joe, Craig Erickson is fearless and shows the depth of Joe’s despair: loving and caring for Harper but knowing he can never make her happy. Celine Stubel is almost translucent as Harper. As Belize, Stephen Jackman-Torkoff gets a lot of Kushner’s funniest lines and when he stands up to Cohn’s bullish, coarse, racist, homophobic diatribes, Jackman-Torkoff finds an appreciative audience.

Gabrielle Rose opens the play as Aleksii Antedilluvianovich Prelapsarianov but is at her most impressive as Joe’s mother who, although Kushner mocks Mormonism, shows true Christian charity in her loving care for poor, suffering Prior.

All but Atkins are multi-cast but Lois Anderson, appearing and reappearing as the Angel, is extraordinary – not merely in her long (and often mystifying) monologues but also physically. Wearing huge, feathered wings, she hangs by wires high above the stage. Slowly treading the air, she’s like a restless horse. Her costumes (one white, one black), by Nancy Bryant, are dazzling, as is John Webber’s lighting on Ken MacKenzie’s simple but beautiful Greek-columned set.

Angels in America: Perestroika is huge. It’s lush. It’s spectacular – and it’s long at three hours and 50 minutes with two intermissions. There are scenes that are completely breathtaking; others that are absolutely mystifying.

But finally, Angels in America is about forgiveness. It’s about who does the forgiving. Who is forgiven. And who is left to wander alone and unforgiven.