She built this city: How Cornelia Hahn Oberlander shaped Vancouver 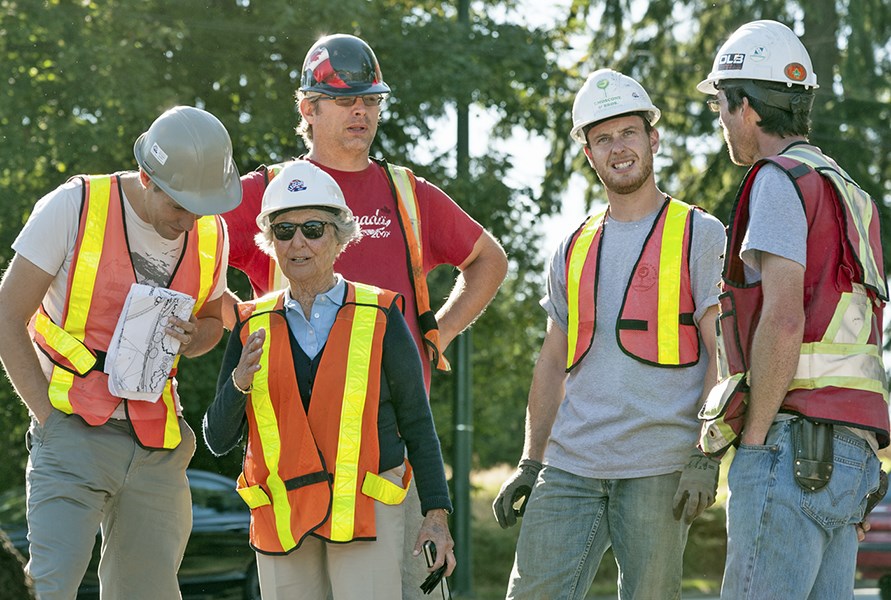 Over her 70-plus-year career as a landscape architect, Cornelia Hahn Oberlander designed and shaped many iconic public spaces in Vancouver. Photo submitted

If Cornelia Hahn Oberlander had listened to her mother and enrolled in horticulture school instead of the landscape architecture program at Harvard, Vancouver would probably look very different.

Consider the list of spaces that Oberlander designed and shaped in her 70-plus-year career as a landscape architect: the paths and reflecting pool at the Museum of Anthropology, the rooftop garden at the Vancouver Public Library, the Visitors Centre at VanDusen Botanical Garden and the Robson Square stramps (inclining stairs with an integrated ramp) and Law Courts complex (which she designed with frequent collaborator Arthur Erickson).

These are spaces where Vancouverites have walked, lunched, paused and pondered — where urban dwellers have interfaced with the natural world.

But we wouldn’t have had these spaces had Oberlander taken her mother’s advice and pursued a path that was, in the early 1940s, far more respectable for women than that of landscape architecture.

Instead, Oberlander broke into a traditionally male profession and changed the landscape of the city.

Oberlander’s story is one of four told in City Dreamers, a feature-length documentary from Montreal filmmaker Joseph Hillel that screens this week at the 2019 DOXA Documentary Film Festival.

The film offers a glimpse into the careers of four trailblazing urban architects of the 20th century. Besides Oberlander, there’s Phyllis Lambert (one of the Bronfman heirs), Blanche Lemco van Ginkel and Denise Scott Brown.

“I could have done four different films,” says Hillel on the phone from Montreal. “Each of them deserves a film. The challenge was to have one voice and to find that trajectory.”

But Hillel found that trajectory and narrative arc, and the result is a film that simultaneously showcases the unique voices and paths of each architect while spotlighting the multitude of ways in which their stories are similar: often the only women in their graduating classes and architectural firms, facing subtle and blatant sexism in an industry that benefitted from their singular visions and expertise and hard work but seemed intent on holding back the glory.

These women shaped cityscapes and skylines. They built communities, both in their cities and in architecture. And they didn’t let the bastards get them down.

“They’re passionate,” says Hillel. “And they’re all still working hard... They’re between 87 and 97. They have very busy schedules. They like to control the discourse. It wasn’t easy to arrange interviews, but once I was in their company, they were so generous with their stories and time.”

In the film, Hillel accompanies the 97-year-old Oberlander to the garden she designed at the Museum of Anthropology, where she notes that she selected many of the garden’s plants because they’re abundant in Haida Gwaii, and she wanted to bring Haida Gwaii to the MOA. Landscape architecture is the art and science of the possible, she says — and parks should be for anyone.

Oberlander appears to have a very different reaction when she and Hillel visit the stramps at Robson Square later in the film. Walking up the stramps, she calls it a forgotten oasis, and expresses her displeasure with the state of the flowers and the paving stones to a surveyor who clearly has no idea who she is.

Oberlander is also visibly unhappy that people are camped out in the park, but only because they have nowhere else to go. “There is no affordable housing in this city,” she says.

Hillel follows up Oberlander’s point with including a visual effects sequence that demonstrates how the Vancouver skyline has changed since the 1960s.

“I was inspired to do that after seeing the pictures of what it looked like before, and when I arrived and looked at that skyline I thought, ‘Wow, this is a forest of buildings, but that doesn’t mean there are places for people to live,’” says Hillel.
“There are people who can’t rent there. There are people who are being forced to live outside of the city. And Cornelia and the other women make us see that the city should be for everyone. It’s not only for the wealthy people. It’s not only for an elite. We should be concerned about that because cities are getting bigger and we have to follow that rhythm and make it livable and listen to the people who have been thinking about this for decades.”

City Dreamers screens May 11 at the Cinematheque as part of the 2019 DOXA Documentary Film Festival. Tickets at doxafestival.ca.