The Little Basket Theatre Company (LBTC) is back this month with its live sitcom, Slacks.
Nov 14, 2017 4:11 PM By: Veronnica Mackillop 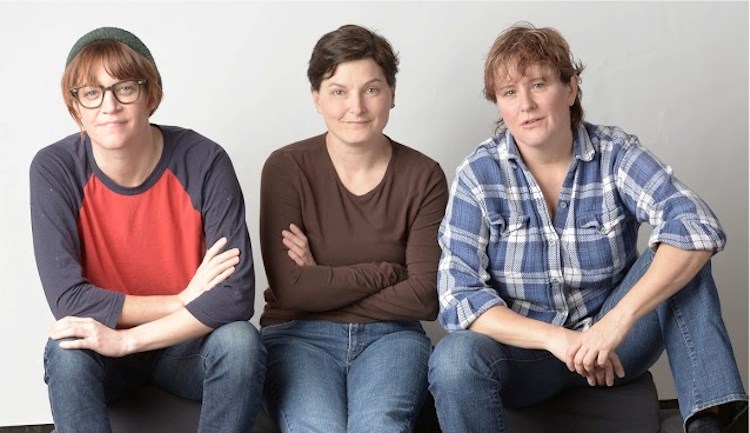 The Little Basket Theatre Company (LBTC) is back this month with its live sitcom, Slacks.

How does a live sitcom differ from a play? LBTC artistic director and Slacks star Jacqueline Korb (The Last Piece, Vic & Jack) compares it to watching an episode of your favourite television show, but live, on a stage, without cameras. She favours the sitcom format because of its ability to bring back recurring characters. There are currently nine episodes of the show, and each run features three.

LBTC will be performing the first three episodes of the show – "A Maid's Tale", "Date With a Mascot" and "The Sound of Femme" – at Havana Theatre from Nov. 16-18. Korb jokes that the show has been referred to as “Seinfeld for lesbians.”

“You're not going to see these characters anywhere else,” she says. “I grew up watching some of the best sitcoms on television, and none of them had a main character who was gay, except for Will & Grace, and [then] when Ellen came out, which was great. But two gay women headlining a show? That's iconic, and they're hilarious.”

The main duo live in an East Van condo, and every episode of the show follows a different theme, from dating, to work, to friendships.

Jackie is based on Korb herself, and the other characters in the show are inspired by the real women who play them. Korb says that the episodes are sometimes based on real events, but they are also based on stories she’s been told, or on conversations she's had. “I could be talking about anything, and I'll go remember that for a future episode, and I could focus an entire episode on a funny story someone told me.”

Korb explained that, although the show is about two gay women, she didn’t necessarily write the show with LGBTQ+ themes in mind. “It's just that the women are gay, and I write the episodes,” she explains. “If they're dating, they're dating women. If they're having troubles in their lives, it could be about anything. To me, I try to make them as everyday and ordinary as possible, they just happen to be gay.”

Korb adds that it is important to have the LGBTQ+ representation inherent to Slacks in Vancouver’s entertainment scene, simply because there isn’t enough of it. “It is growing now, but there still [isn’t] enough,” she says. Korb adds that the show has something in it for everybody.

“I just want [the audience] to laugh. I want them to get the same thing they would get from any comedy show, whether they're watching it on TV, or watching it live,” she says. “I've been doing comedy a long time, and I always say, if you come to a show and you've had a lousy day, I hope the show can make you forget your lousy day.”