Musician, guerrilla journalist and YouTube sensation will get a star on Granville Street
Jun 10, 2019 2:09 PM By: Grant Lawrence 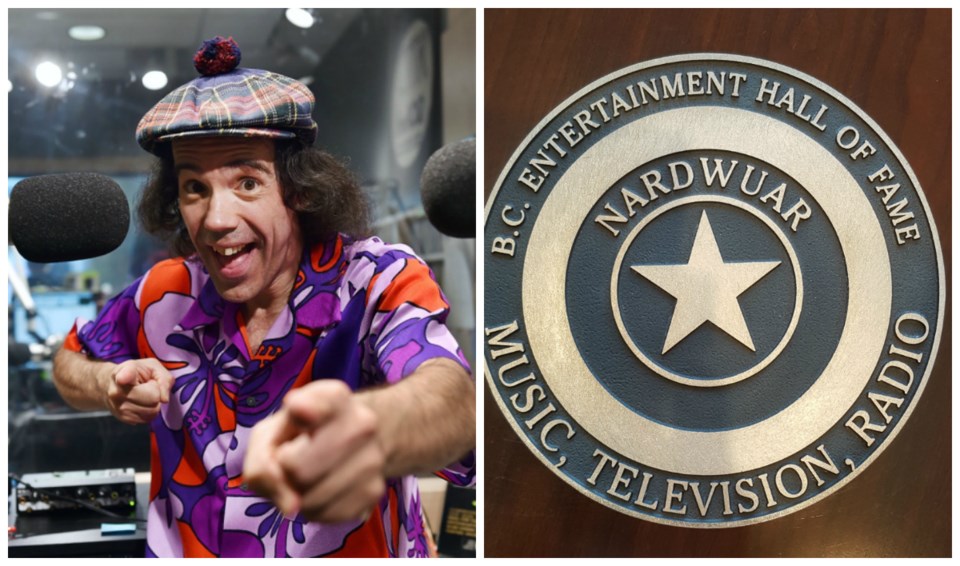 Nardwuar the Human Serviette’s closest friends and confidantes teamed up to secretly nominate the local media icon for the B.C. Entertainment Hall of Fame. Their efforts were successful. Left photo Dan Toulgoet

“I love Vancouver, I love Canada, I love the world, I love life!”

The idea was pretty simple: Our pal Nardwuar the Human Serviette was turning 50. He had recently celebrated the 30th straight year of his weekly CiTR Radio program. What could his friends and I do to celebrate the man that the Georgia Straight once called “a Vancouver icon, a genius and one of the world’s most idiosyncratic interviewers”?

Then I remembered a few years ago when local author and Courier contributor Aaron Chapman was successful in his bid to get D.O.A.’s Joe Keithley an induction into the B.C. Entertainment Hall of Fame (BCEHF).

Thanks to Chapman’s effort, the punk singer received his own bronze star on Granville Street, joining Vancouver’s two-block “star walk,” alongside previous inductees Michael J. Fox, Bryan Adams, Diana Krall and many others.

If the BCEHF would accept Joey Shithead, now a Burnaby city councillor and still frontman of D.O.A., would they accept… Nardwuar the Human Serviette?

Besides Nardwuar’s longevity on local radio, he has also been the lead singer of the garage-punk band the Evaporators for 33 years. Nardwuar refers to their genre as “history rock,” since they often sing about characters and events from B.C. on songs such as “Gassy Jack,” “Ripple Rock” and “Ogopogo Punk.”

Then there were Nardwuar’s MuchMusic years, which gained him access to much bigger stars than a CiTR press pass would allow, vaulting him to mainstream recognition. After MuchMusic went sideways, Nardwuar pivoted to YouTube, where he has become a global sensation.

His celebrity interviews with everyone from Pierre Elliott Trudeau to Lady Gaga to his legendary series of conversations with Snoop Dogg have racked up over 170 million views.

Coupled with his one million-plus subscribers, and those stratospheric numbers puts Nardwuar’s YouTube channel into the top three per cent worldwide.

You know you’ve hit the zeitgeist when kids are dressing up as you for Halloween.

Over the past 20 years, Nardwuar has also had his fair share of serious health scares. There was the brain aneurism in 1999, followed by a stroke in 2015 and heart surgery in 2016. Thankfully, he has made remarkable recoveries from all three.

After speaking with Chapman about getting Nardwuar his own star, it was decided that if we went for it, it would have to remain a secret from Nardwuar, since he tends to like to do things his own way, to put it mildly.

Chapman told us we would need a lot more legit, mainstream media members from B.C. to support the bid than just us. Chapman wasn’t sure what the voting members of the hall would make of the wildly eccentric Nardwuar and his trademark tam o’ shanter.

I’ve been lucky enough to know Nardwuar since I was six years old at Irwin Park elementary in West Vancouver. In a sense, I have been trying to convince “normal people” that Nardwuar is legit for most of my life.

When Nardwuar and I were teenagers, he would wait in the car while I would try to persuade the managers of rec centres, churches and Masonic Halls to let us rent their spaces for the all-ages concerts that Nardwuar promoted around Vancouver in the 1980s and ’90s, featuring the likes of Mudhoney, Fugazi and the Gruesomes. I figured if we could pull that off, we stood at chance at this.

And even though the application only calls for 10 nominators, most people we approached were so eager to support Nardwuar that we wound up with 30 backers, including Jim Robson (the legendary “Voice of the Canucks”), actor Finn Wolfhard (Stranger Things), singer Bif Naked, Beachcombers star Jackson Davies, media-Swiss-army-knife Terry David Mulligan, broadcasting pioneer Ellie O’Day, Global TV’s Squire Barnes and many more from the Vancouver Sun, Province, Globe and Mail, Georgia Straight, CBC, CTV, Peak FM, the Vancouver Courier, Vancouver Is Awesome and other outlets.

With a list of backers that strong, we were hoping the voting body from the BCEHF wouldn’t say no. Thankfully, they didn’t.

Last weekend, just before the announcement was made public, I called Nardwuar to inform him of the news. It was a rare moment when I caught the Human Serviette speechless. He quickly recovered and kept me on the phone for over an hour, peppering me with questions about the induction and of how we all pulled it off without him knowing. He was also humbled.

“I am so honoured,” Nardwuar told me. “I dedicate the award to my mom, who instilled in me a deep love of history. And please add up your hours and let me know what I owe you!”

Nardwuar’s induction comes side by side with several other B.C. entertainers, including blues rocker Colin James (“My gym buddy!” Nardwuar proclaimed, since they both work out at the same West Van gym), artistic director of Ballet BCEmily Molnar and Breaking Bad Emmy winner Moira Walley-Beckett, among others.

Nardwuar’s star will be set in stone on Granville Street in the coming weeks. An official red carpet public induction ceremony will occur in September. Hope to see you there, and doot doola doot doo…