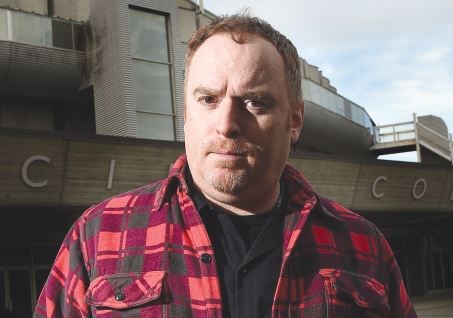 Live at the Commodore author Aaron Chapman wishes he had seen the Ramones play the venerable ballroom in 1977. Photo Dan Toulgoet

What makes the Commodore a fan favourite?
You see not only some of the biggest acts on the way up, but you also see some great bands on the way down. They prefer to play that venerable stage over a casino or seated theatre. The room has an energy known world-over. The sight lines are great, the sound is great.

What did your book research reveal that intrigued you the most?
Just about anybody who’s anybody has played there. I like the weird anecdotes, too, such as when a team of safecrackers broke in in the middle of the night, blew the safe and stole $650 — that was a lot of money in 1941. To the best of my knowledge, it wasn’t solved. Please ask your grandparents about this — if they seem shifty, or change the subject quickly, I’d like to talk to them.

If you could go back in time, which era of the Commodore would you visit?
It would have been wonderful to be there when it first opened in the ’30s, hear the Big Band music and watch the Dry-Squad cops racing up the stairs to see if they could catch anybody drinking booze when it was an unlicensed “bottle club.” But to be honest, I’d love to have seen concerts in the 1980s, just before I was of legal age to get in. All my friends certainly did with fake ID — I must have been the only honest 17-year-old in town.

What’s the one concert you wish you’d seen?
The Ramones in August 1977. Punk rock was just breaking, and to read the reviews of the show at the time, the owners, the bartenders, staff and probably a lot of the audience just seem wholly unprepared for them. Some loved it. Plenty hated it. But you could see a changing of the guard that night. The wind changed direction, and things weren’t going to be the same.