State of the Arts: A Tribe Called Red perform at Talking Stick Festival 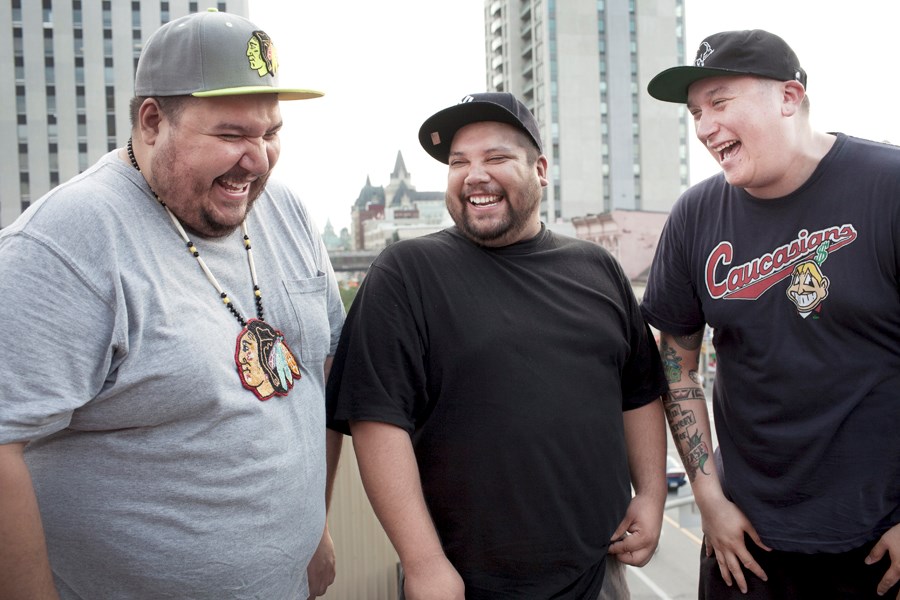 A Tribe Called Red perform two nights at the Commodore as part of the Talking Stick Festival.

A Tribe Called Red has become so popular that a second date was added to their sold-out Feb. 22 Commodore Ballroom show.

The Ottawa-based aboriginal production/DJ crew will not only play the Salish Coast Live event of the 13th annual Talking Stick Festival Saturday, but also a Friday night show.

“I was already excited enough to be coming out to play at the Commodore,” DJ Bear Witness said. “We weren’t expecting to sell it out.”

A Tribe Called Red started with Electric Pow Wow parties in Ottawa in 2007. Witness, DJ NDN and others would mash up electronic and other beats with traditional powwow vocals and drums.

Witness said they wanted to create an event that celebrated the music of the indigenous community in the vein of dance hall and bhangra shindigs.

After two-time DMC Champion DJ and producer DJ Shub joined the crew in late 2008, they started recording their own tracks and gained a legion of diverse fans.

“We started a party to be inclusive of indigenous people,” Witness said, “and everybody showed up.”

Their self-titled album released in March 2012 was short-listed for the Polaris Music Prize and included in the Washington Post’s top 10 albums of the year.

Witness, 36, has deejayed for more than 18 years, favouring dub step, dance hall, jungle and reggae. DJ NDN drummed in a Montreal-based punk band and prefers heavy electronic music while Shub was a scratch battle DJ who produced hip-hop, so their music appeals to a broad audience. Witness has also worked as an experimental video artist for a decade and produced A Tribe Called Red’s videos that include cannily used historical snippets.

Musqueam artist Ostwelve will host Salish Coast Live, which will include acts Mat the Alien, Lido Pimienta, Self Evidence, VJs Kinotropy and Heidrogen and Tsleil Waututh artists. Coast Salish Live is an initiative of W2 Media and the Tsleil Waututh Nation Sacred Trust, which is dedicated to protecting the Salish Sea and connecting artists and audiences.

Crystal Shawanda is another award-winning musician performing at the Talking Stick Festival. The country songstress performed at the presidential inauguration in Washington, D.C. in January 2013 and won her first Juno Award for Aboriginal Album of the Year for Just Like You. She plays the York Theatre March 1.

Witness says the best praise A Tribe Called Red received came from an introduction by Cree hip-hop photographer Ernie Paniccioli, who grew up in Brooklyn, at Toronto’s Manifesto festival.

“He started talking about how he’d been involved in music for over 30 years, he had always had a dream that one day somebody would come from our community and represent us in a way that only we can do, and said ‘well that dream is now standing right behind me,’” Witness said. “We all got pretty misty on stage. It was kind of one of those moments [where it was like] OK, what do we do now? Somebody press play. Somebody start the track.”