State of the Arts: Personal becomes public at Verses Festival

Transgender artists team up for Gender Failure performance and book
Mar 28, 2014 11:17 AM By: Cheryl Rossi 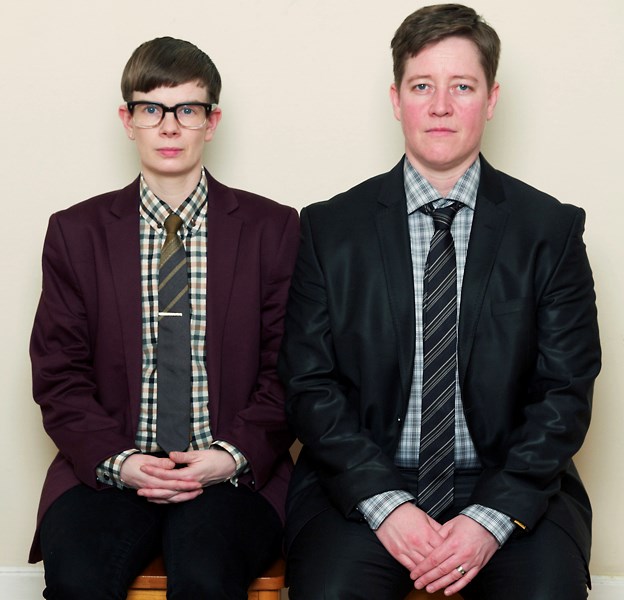 Celebrated storyteller Ivan Coyote performed at a “lovely” festival in small town Ontario a few years ago where all the venues were churches and most of the audience members were in their 60s.

“The producer picked me up and was like, ‘Oh so we’re having a pork chop lunch at the Presbyterian Church and they’re all nice people, don’t worry about it, it’ll be fine. And we’re really glad you’re here. We’re really hoping that you’re going to bring more diversity to the audience and to the stage so just be yourself. Just don’t be too much of yourself, if you know what I mean,’” Coyote said.

It’s the kind of comment Coyote and indie musician Rae Spoon are all too familiar with so the two transgender artists followed up an earlier collaboration, You Are Here, about Coyote’s family history in the Yukon with an even more personal multimedia show that explores their journeys in gender to self acceptance.

That show, Gender Failure, returns to Vancouver April 9 to launch the duo’s book of the same name, which is being published by Arsenal Pulp Press. It’s one of 33 events over eight days, April 5 to 12, happening around Commercial Drive as part of the annual Verses Festival of Words.

Coyote and Spoon, who prefer the gender-neutral, singular pronoun “they,” created a show by them, for them.

Coyote has long gotten personal with tales of friends, family, lovers, intimate conversations with strangers and home. But Coyote’s stories in Gender Failure are so intensely personal they’d typically be shared with few.

“I’m talking about stuff about my physical body that I wouldn’t choose to do outside of an art realm, especially with strangers,” Coyote said.

Spoon highlights their family history and shares tales from touring in Gender Failure.

“My experience of the gender binary, feeling like I couldn’t really be very good at being a girl when I was younger and then eventually kind of retiring and giving up because I thought it was all just kind of weird and funny and it stopped being valid to me,” Spoon said.

Gender Failure, the book, includes stories, stills, animations and lyrics from songs in the show alongside poignant autobiographical essays.

“Even after we wrote [the show] Gender Failure, in like two 45 minutes [sets], I felt like I had more to say about gender in general,” Spoon said.

Coyote, who performed with singer-songwriter Veda Hille at Verses last year, is excited to return the festival that celebrates the transformative power of words, whether they’re written, spoken or sung.

Coyote plans to see the What Rhymes with LOL event, April 8, which is co-hosted by Daniel Zomparelli and explores humour in poetry.

“They’ve got a huge, great lineup this year,” Coyote said of the fourth annual festival that was previously called the Vancouver International Poetry Festival and is hosting the Canadian Individual Poetry Slam championship.

Gender Failure is Spoon’s second book and Coyote’s 10th, but because the stories are so “close and personal,” it feels more significant.

Coyote says one young audience member has seen the show up to five times. The fervent response from queer and trans youth has convinced Coyote the absolute candor has been worth it.

“When I was 20, I had no one and nothing that I could directly look to as any kind of a reflection of myself,” Coyote said. “I did not see my personal struggles reflected, [except in the novel Stone Butch Blues [by transgender activist Leslie Feinberg], a little bit.”

Coyote has learned another lesson from risking vulnerability and seeing personal struggles resonate with a broad audience.

“You don’t know what people’s struggles are by looking at them. You can’t look at an audience full of nice ladies at a literary gathering and assume that you know what their struggles have been in their life,” Coyote said. “All of us are fighting a hard battle… They just relate to it in whatever their experience of being ‘othered’ is.”