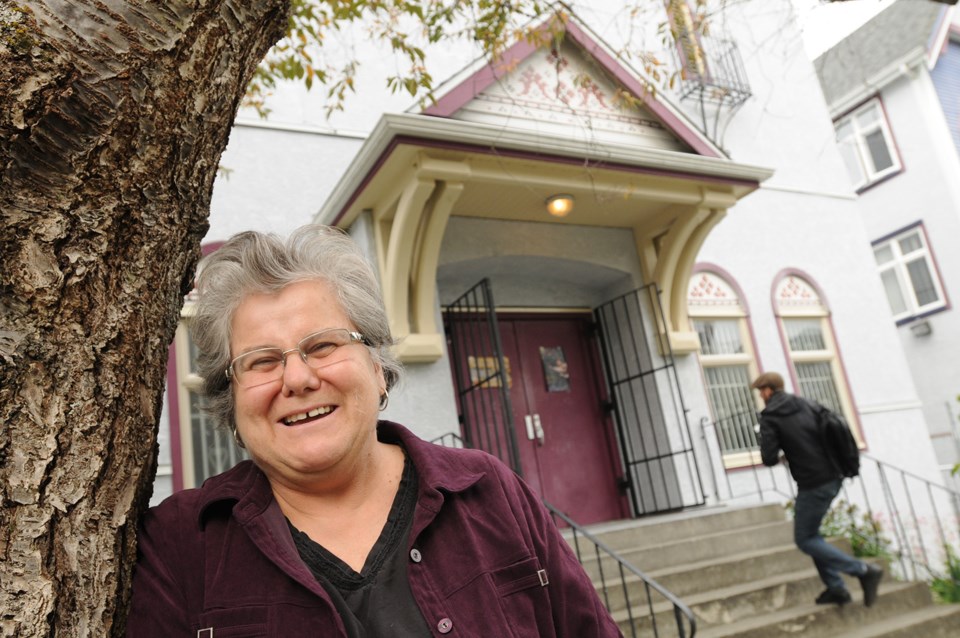 The neighbourhood around the Ukrainian Hall at East Pender Street and Hawks Avenue used to be dense with Ukrainian-Canadians.

“Some of the [Ukrainian] elders that I knew and that I interviewed for this talked about how if you needed to have a meeting you would just step out Pender Street in front of the hall and snap your fingers and everybody would come out,” said Beverly Dobrinsky, who directs the Barvinok Choir at the hall and researched the building’s history for a new production, Bread & Salt, that celebrates its 85th anniversary.

Now third and fourth-generation Ukrainian-Canadians return to the hall to participate in or listen to the Association of United Ukrainian Canadians’ folk orchestra, choir, dance school and troupe.

The hall’s history will be highlighted with special anniversary shows Nov. 8 and 10, which follow the 10th annual Downtown Eastside Heart of the City Festival (Oct. 23 to Nov. 3). Bread & Salt, a multidisciplinary production that tells the story of the Ukrainian experience in the East End of the city, weaves oral history with theatre, choral singing, music and high-energy Ukrainian dance.

“People built that out of their own blood, sweat and tears,” said Dobrinsky, who interviewed Ukrainian elders and searched through the hall’s archives and music library to co-write the show with Savannah Walling, artistic director of Vancouver Moving Theatre, which produces the Heart of the City Festival.

“Coming out of war and interment camps [after the First World War], we knew we needed a meeting place for mutual support,” says one of the storytellers quoted in the program guide to Bread & Salt. “There was no welfare or social services — we had to do it all for ourselves… We didn’t know how to build a hall, we just did it — built it with our own hands in 1928, then paid off the mortgage in three years, paid it off in pennies, nickels, dimes.”

The association immediately sponsored a full slate of cultural, educational and social activities. Then the Great Depression hit and the hall became an organizing hub for labour struggles. After Germany invaded Poland during the Second World War, Canada invoked the War Measures Act and the Ukrainian Hall was padlocked under Defence of Canada Regulations, which broadened the government’s powers. During this time, Ukrainian dancing and language schools carried on at the Italian, Finnish, then Croatian, now Russian, halls, and the Ukrainian-Canadian community continued to raise money for the war effort.

“After the Soviet Union allied with Canada in the war against the Nazis, the ban against the association [of United Ukrainians] was lifted. But we had to petition the federal government to get back our halls,” a storyteller in Bread & Salt says. “There was a six-and-a-half-block parade when the Ukrainian Hall reopened… We were coming back to our home.”

More than 60 professional and community actors, singers, dancers and musicians will perform in Bread & Salt, a two-hour extravaganza directed by James Fagan Tait, which includes 24 songs and six dances executed by multigenerational dancers.

An ensemble of professional musicians will play the standup bass, accordion and mandolin, with the Vancouver Folk Orchestra backing some numbers to create a bigger sound.

The Heart of the City Festival aims to profile and foster the development of community arts in the Downtown Eastside. It involves a wide range of professional, community, emerging and student artists and lovers of the arts, More than 1,000 artists participated in the festival last year.