Vancouver Symphony Orchestra School of Music a hit with the older crowd
Sep 19, 2013 10:44 AM By: Cheryl Rossi 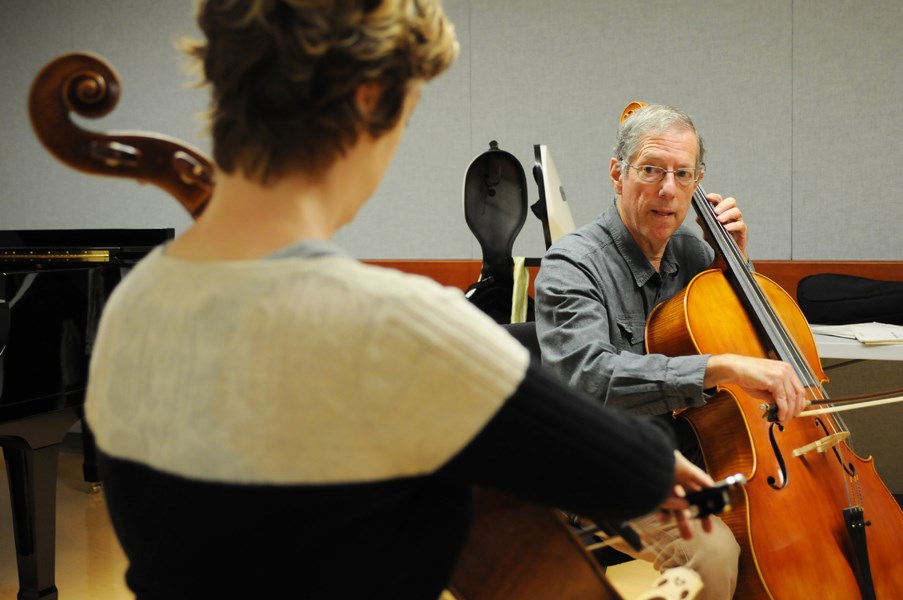 “When they announced that they were opening, their original publicity said that the VSO School of Music was for all ages and abilities,” he said. “So I read that and I thought, ‘Aha that’s me.”

Wisenthal isn’t alone in his late-in-life focus on musicianship.

Curtis Pendleton, executive director of the VSOSoM, says administrators noticed last year that almost half of the school’s 1,000 students were adults, and 30 per cent of those were aged 55 and older. Some enrol as absolute beginners and others return to lessons to dust off faded skills.

VSOSoM opened next to the Orpheum in fall 2011. It offers music appreciation classes, small ensembles and private classes. The school offered beginner violin classes for grownups over the summer that included wine and cheese and attracted a good number of students, according to Pendleton.

“We’re going to look at programming a whole lot more of those introductory things for adults,” she said.

Students can interact with VSO music director Bramwell Tovey, the musicians in the orchestra, many of who teach, and international guest artists, whom frequently lead presentations and master classes. Students can access discounted tickets to the symphony and adult students can sit in the orchestra during a rehearsal.

“We’re trying to create a total experience for them,” Pendleton said.

“It keeps us sharp and it keeps us engaged and there’s also that social aspect of making music with other people,” she said.

Wisenthal took piano lessons and learned to read music as a child, picked up the violin for a few years and now adores the “rich, resonant full sound” of cello. He’s taken cello lessons on and off for years, starting in 2000, and has a piano in his home.

“Cello enables you to play chamber music and that is my main goal,” he said. “That is one of life’s great activities, getting together with other people and playing… It’s a wonderful feeling.”

Wisenthal and his wife began subscribing to the VSO in 1964.

“It is a real privilege to be able to study with a member of the cello section of the VSO,” Wisenthal said. “I’ve had no sense at all of being out of place or too old for something called a school…It’s just a delightful retirement activity.”

Wisenthal laughed when asked what his wife thinks of his music studies and then he said they’re fortunate to occupy a house. “I am actually able to hide myself away,” he said.

Pendleton believes the school is affordable for seniors, with lessons costing “as little as” $175 a term. Classes start throughout the year.