The Residents: From ‘Baby Sex’ to near-death experiences

In Theory of Obscurity: A Film About the Residents , Penn Jillette – half of the comedy-magic duo Penn and Teller – describes the avant-garde band as exemplifying “the USA at its best,” and says without seeming particularly hyperbolic that they are,
Apr 13, 2016 11:47 AM By: Allan Macinnis 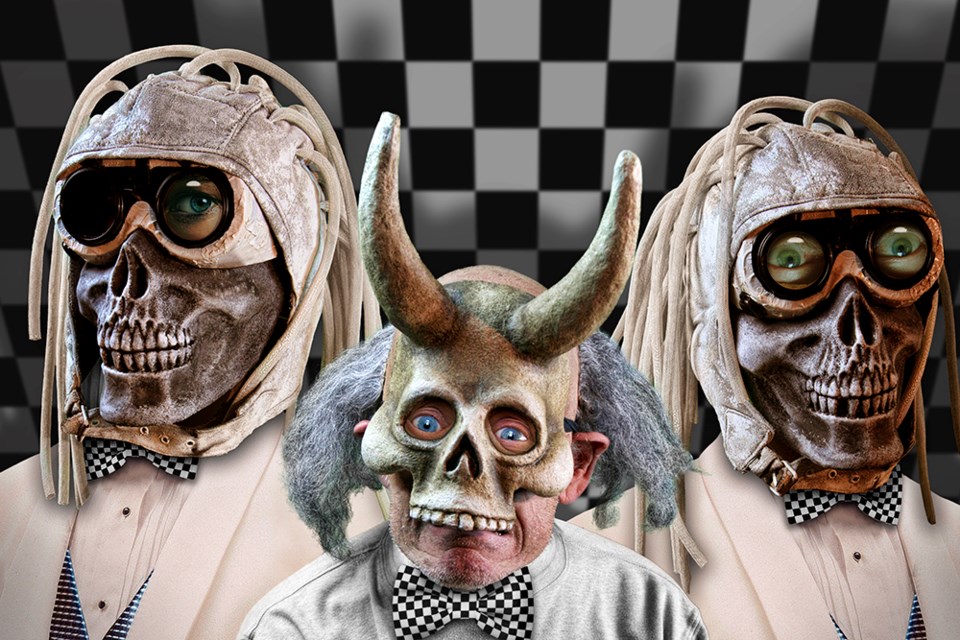 The Residents brings their avant-garde weirdness to the Rio Theatre this Thursday, April 14.Contributed photo


In Theory of Obscurity: A Film About the Residents, Penn Jillette – half of the comedy-magic duo Penn and Teller – describes the avant-garde band as exemplifying “the USA at its best,” and says without seeming particularly hyperbolic that they are, “by any sane measure, more successful and happier than the Beatles.”

Of the notables who appear in the documentary, testifying to the brilliance of infamously anonymous, long-lived San Francisco anti-band, Jillette has a privileged place, having appeared onstage with the Residents as the unreliable narrator for their first large-scale stage performances, The Mole Show, a highly ambitious, media-rich early theatrical production that toured Europe and the USA in the early 1980s.

“Certainly everything I ever did was dwarfed by that huge flowing tidal wave of ideas that came out of the Residents,” he says in the film.

But he’s not their only noteworthy fan to speak on their behalf. Dean Ween, Jerry Harrison, and Devo’s Gerald Casale all offer testimonials. Simpsons creator Matt Groening, who curated the band’s appearance at All Tomorrow’s Parties in 2010, says he loved them from the moment he first heard them. Primus’s Les Claypool, on the other hand, tells the story of how much he hated the band at first – thinking their song “Constantinople” was “the music they are probably playing in hell.”

Gradually, he came to change his mind. “It’s like a fungus,” he observes. “It just kind of takes over.”

The Residents – some four decades after the release of their 1974 debut, Meet the Residents remain so shrouded in secrecy that the people most frequently cited as the founding members – Homer Flynn, Hardy Fox, Jay Clem, and John Kennedy – even now describe themselves solely by their corporate position within the umbrella group, the Cryptic Corporation, referring to the band as “they” or “them” – never “we” or “us.”

Flynn, theorized by some to be lead vocalist Randy Rose, credits himself officially as the manager of the Residents, as well as their graphic designer, under the alias of Poor Know (or sometimes Pore No) Graphics.

Resident or not, he’s a font of insider knowledge.

Reached by phone from his home base in California, he freely admits to Westenderto having worn their signature eyeball mask, created for the cover art of their 1979 release, Eskimo.

“It’s hard to have them around and not put one on and just see what it’s like,” he explains.

He also notes that Randy sometimes sweats a great deal under his present costume, ”an all-over body suit leotard with a little kind of tux jacket,” adding that, “in general, the costumes have gotten lighter and smaller and thinner” since the days of the eyeballs, or, say, the giant bunny suit Randy wore for the Bunny Boytour.

Masks and anonymity were not built into the band from the outset, it seems. Some of the most remarkable footage in the documentary is a black and white clip of the band, long before they’d taken a name, at an open mic night at a folk club in San Francisco, on October 18, 1971. Unmasked, the group – hairy hippies, the lot of them – cavorts about the stage, making an obnoxious, theatrical racket, a jazzy cacophony that bears little resemblance to the artful, deliberate weirdness of Meet the Residents.

Flynn, who will only go so far as to admit having been “in the audience” that night, says, “this was during [British guitarist] Snakefinger’s initial encounter with the Residents. He was really a blues guitar player, for the most part, but heavily influenced by Frank Zappa. He had been going to several of these clubs, and the Residents had gone with him on occasion, and after getting bored out of their mind with all these mediocre acoustic singer/songwriters” – Flynn describes them as “James Taylor imitators” – “they came to the decision that, ‘Okay, we can do that, but we’ll do it differently.’”

Inspired by Captain Beefheart and Sun Ra, aspects of the proto-Residents’ music are startlingly in-your-face.  Early song titles include “Go Fuck Yourself on the Doorknob, Mom,” and “Rusty Coathangers for the Doctor.”

Or there’s the Baby Sex tape, the second of two reel-to-reels the band sent to Hal Halverstadt of Warner Brothers, which had as its cover a silkscreen blown up from an ad for mail-order pornography from Denmark. It depicted a woman fellating a young boy – or perhaps it was a midget?

“All you can tell is it’s someone with short legs and a small penis,” Flynn offers.

If it all seems a little aggressive, consider that the band began as complete outsiders: Louisiana hippies, transplanted to San Francisco, with no particular musical skills or means of reaching the people they regarded as peers.

“They were looking for a window or a door to get in, not so much to get into the mainstream culture, but just to become a voice, in terms of the things they appreciated artistically. I think they felt like they needed to be aggressive to do that,” Flynn says. “While the Residents were never punk – they were always more ‘out ’ than that – there was a certain punk attitude or energy that infused their music.”

Forty-odd years later, the band has played a pioneering role in the world of rock videos, CD ROM multimedia art, and even advertising – having paid a San Francisco radio station, KFRC, to play each minute-long song on their Commercial Album over the course of 40 advertising slots. As seen in the film, they have had a refrigerator filled with their complete works (and one eyeball) put into the permanent collection at the Museum of Modern Art. And the band continues to present their media-enhanced, heavily costumed, and weird-as-fuck stageshow to hosts of rabid fans and puzzled noobs the world over.

The lineup is “in flux” at present, Flynn says, with rumours of members, real or fictional, retiring. But whoever exactly the Residents are, at present, they will be at the Rio on April 14, performing after a screening of Theory of Obscurity. Flynn – who at the very least will be in the audience – explains that the tour is themed around “birth, rebirth, reincarnation, and near death experiences,” featuring a hand-picked selection of songs from their back catalogue that fit the bill.

As for the film? “I’m happy with it,” Flynn acknowledges. “I thought that (filmmaker) Don Hardy did an amazing job of taking 40-plus years of Residents’ craziness and condensing it down into an hour and a half. It’s not a job I would have wanted.”

• The San Francisco experimental music and art collective present a screening of their new documentary, Theory of Obscurity, followed by a live performance by the band this Thursday, April 14, at the Rio Theatre.