Theatre review: Fringe for all 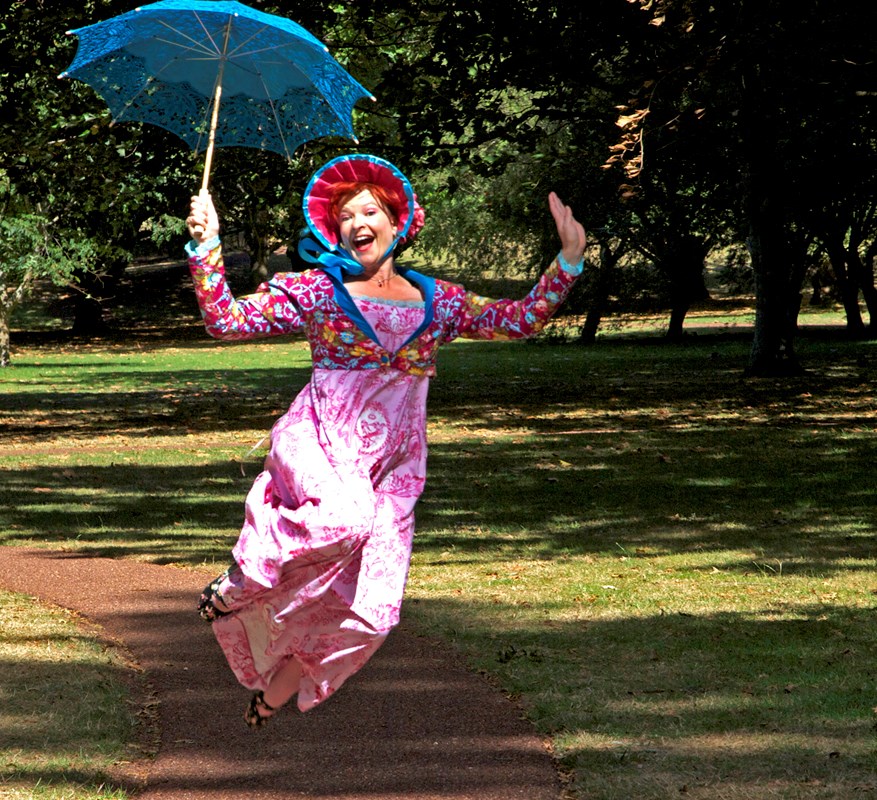 New Zealand’s Penny Ashton skips down the path in the charmingly naughty Promise and Promiscuity: A New Musical by Jane Austen.

The Vancouver Fringe Festival runs until Sept. 15. For tickets and show times, go to vancouverfringe.com.

Promise and Promiscuity: A New Musical by Jane Austen
At Performance Works
Sept. 10, 13 and 14
No, it’s not really by Jane Austen and that’s a good thing because New Zealand’s Penny Ashton doubtless does it better. Ashton, in a flowered Regency period frock, plays Elspeth Slowtree a.k.a. Wilbur Smyth, secretly published novelist. Ashton is also Elspeth’s mother and younger sister; her snorting, farting cousin Horatio; a pinched-faced upper class snob and her whiny daughter Thomasina; several men; and maybe even a couple of horses. Ashton draws from Austen’s Pride and Prejudice whilst adding some sly double entendres regarding balls and other naughty body bits. Elspeth, unmarried at twenty-two, claims she would rather “play with myself for eternity” rather than marry a man who’s only looking for a “ninny or a nincompoop.” Ashton, who sings beautifully, writes new words — sometimes in the manner of Gilbert and Sullivan — to contemporary songs and charms the pants off us in the process. Austen would approve of Penny Ashton’s chutzpah and probably applaud when the f-word — fiddlesticks — is dropped. Austen fans should not miss this one.
—JL

Radio :30
At Waterfront Theatre
Sept. 9 10, 13 and 14
You can understand a director tweaking an actor’s delivery of a line in, say, Hamlet, but who knew how picky a director could be when taping a 30-second radio ad for Chester’s, a fast food joint? That’s where veteran voice guy Ron, a.k.a. Mr. One-Take Wonder, finds himself — and loses it. Writer/performer Chris Earle merges recording the ad and an event in Ron’s life that sends the taping into overtime. You will have memorized the ad by the time Radio :30 ends, it’s that repetitious. But Earle is an affable, relaxed performer and the character he creates is likeable although, “I’ll be anyone you want me to be” gets Ron into hot water. When that attitude creeps into his personal life, it’s game over. Presented by Toronto’s The Night Kitchen, Radio :30 has won a whole load of awards and critical accolades. It wasn’t, for me, “Devastating” or  “Unexpectedly moving” as critics across the country claim but it was entertaining.
—JL

Kuwaiti Moonshine
At Waterfront Theatre
Sept. 10, 13 and 15
I’m usually not Fringed-and-singed on Day 1 of the festival, but I had a hard time staying with Tim C. Murphy in Kuwaiti Moonshine. Murphy plays Andy Mangen, a Canadian teacher in Kuwait and an innocent abroad. Well, not that innocent. He ends up in jail for bootlegging date wine. I wasn’t at all interested in Andy’s thoughts on Nickelback or the Toronto Blue Jays — who cares? And there are a couple of dream sequences that just add to the confusion. Murphy, as tall, gangly Andy, goes a mile a minute — working it, working it. As the alternate fedora-wearing character, Jean-Luc, Murphy is much more laid back but that character is never completely integrated into the story. There’s really interesting material here but Murphy needs to filter out what’s not important and emphasize what is. It’s a manic performance that left this viewer breathless and bewildered.
—JL

Butt Kapinski
False Creek Gym
Sept. 9, 13, 14 and 15
If you don’t like interactive theatre, stay away from Deanna Fleysher’s Butt Kapinski. But wait a minute: this might be your big chance to change all that. I haven’t seen an audience so willing to jump in and that’s because Fleysher is that good. Play dead, play a whore, a reporter, make music like a saxophone. It’s called eating out of her hand and we were in there gobbling it up. Fleysher is outrageously rigged out in a rumpled trench coat, messy white shirt and tie and, get this, a gooseneck lamp fixed over her head. She’s Butt Kapinski, private eye with a speech impediment: Kapinski’s happy to be in Vancouver where it “wains and smews of weefer thmoke” and this is her tribute to “fiwm nwow” (film noir). Fleysher is fearless and quick with the ad lib. The show goes completely sideways at the end and I’m not sure where she takes it is the best place to go. But, hey, she duct-taped my mouth — can you believe it? — so I’m going to shut up now. Be afwaid, be vewy afwaid of this California highschool teacher.
—JL

You Killed Hamlet
At Performance Works
Sept. 9, 12, 14 and 15
“Ding dong, the f**k is dead/Which old f**k/Any old f**k.” Maybe I should try this one again because I thought the two grotesque clowns from San Francisco hit an all-time low at the Fringe. I got that they were poking fun at our culture for not wanting to look at death, not wanting to think about all the nasty ways we can die — but, hey, we’re here for a good time, not a stupid time. It seems you either love this show or you walk out. It was not just the monstrous, dangling genitalia or the language — the whole thing just left me cold unlike last year’s The Red Bastard, which it most resembles and which I loved. But You Killed Hamlet (or Guilty Creatures Sitting At a Play) won Best of the Fringe in San Francisco so how did I miss the boat so badly? It’s cabaret-style at Performance Works; you can drink alcohol. Maybe that’s the ticket.
—JL

Bursting Into Flames
At the Cultch
Sept. 9, 10 12, 14 and 15
It’s amazing that writer/performer Martin Dockery doesn’t just burst into flames during this performance. He sets such a hellish pace from his vantage point in Heaven where his character finds himself that you’ll be breathless just keeping up. Heaven sounds good (you can drink and drive, for instance), but Hell is worse than any Bible-thumping, fire-and-brimstone preacher could ever envision. Dockery’s imagination is so outrageous you have to wonder from what part of his brain does this stuff come. Imagine, for example, rolling a joint the length of the Trans Canada Highway, then picking it up and smoking it just so you can get high enough to get to the moon. Bursting Into Flames is a workout and the character could probably use a cold one — although where he ends up probably doesn’t have anything on tap.
—JL
More reviews at joledingham.ca.