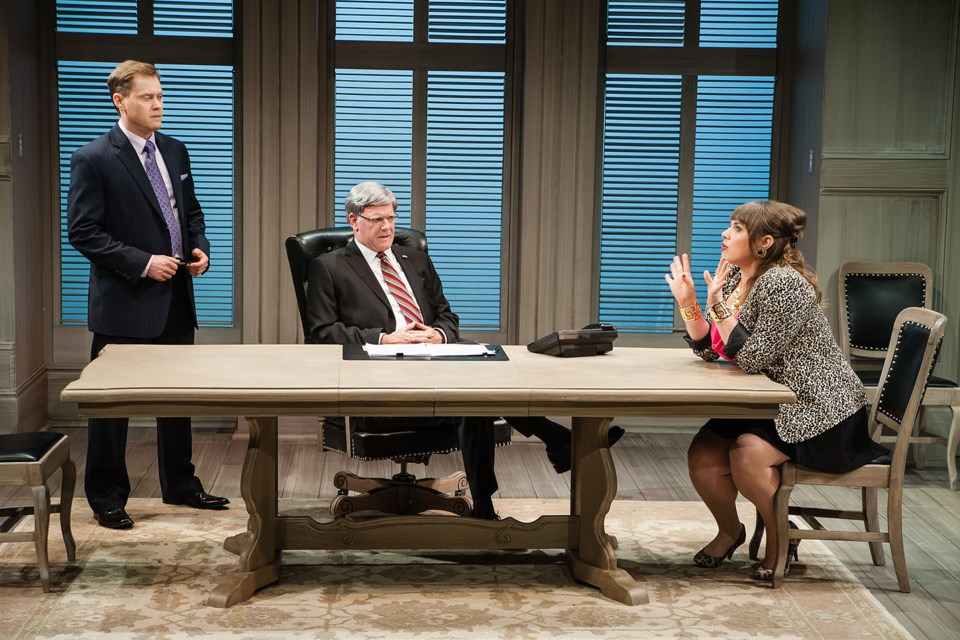 It’s spooky how like Stephen Harper actor Andrew Wheeler is in Proud and it’s not all in the grey, plastered-down wig. Wheeler affects so well the stiff, square-shouldered posture and the one-button adjustment of the suit jacket whenever the PM wants to look really, really important or when things get really, really dicey.

And in Michael Healey’s Proud, they do get dicey. And down. And dirty.

Healey plays fast and loose with Canadian history when he sets Proud just after the 2011 federal election with the Conservatives having won an even bigger majority than they actually did and ushering in a lot of rookies who hadn’t a clue — which they actually didn’t. Among these newbies is Jisbella (Emmelia Gordon), also known as Jiz.

Close to the top of the play she barges into the PM’s office asking if he or Cary, his chief of staff (Craig Erickson) has a condom. Jiz, a single mother with a healthy appetite for hot but casual sex, is a loose cannon that Cary says he’ll take care of. But Healey’s Harper, canny politician that he is, sees opportunity in Jiz’s flamboyant, foul-mouthed attitude. She is, however, much smarter than he gives her credit for. The tables get turned and there’s almost sex on the PM’s desk. And much foul language.

There’s a huge controversy around Proud; Toronto playwright Healey either resigned or was fired after 11 years as Tarragon Theatre’s writer in residence. The possibility that the play was libelous — although it never mentions Stephen Harper — scared everyone off and Healey ended up producing the play himself. Even though the libel threat has been discounted, this Firehall Arts Centre production, directed by the Firehall’s artistic producer Donna Spencer, is only the fourth production.

Proud is very funny: Wheeler wears Harper’s awkward physicality well and when it looks like the PM will have to have sex with Jiz to shut her up, Wheeler looks like he’s going into shock. Where to put the hands. How to do the deed.

Gordon is a firecracker in this role. Full bosomed and luscious, Gordon’s Jiz just flaunts it. Wearing low-cut tops, short-short skirts you’re almost afraid she’s going to take it all off right then and there. When Gordon grabs Wheeler’s hand and thrusts it under her shirt, shock waves run through the theatre and everything stands still for a minute.

As Harper’s chief of staff, Erickson is appropriately conniving and he does “take care” of Jiz but probably not in the way you’d expect.

A mysterious character  (earnestly played by Scott Button) sits in shadow stage right with a big CBC logo projected behind him. We don’t find out who he is until the end and it makes for a clever wrap-up. In a way, it’s where the playwright has wanted us to go all along.

This is not a real exposé of how the political wheels turn; it’s satire. But buried in all the Rick Mercer-style lampooning, there’s some truth. No one doubts that red herrings are raised in the House to obscure thorny issues that the PMO wants buried. And no one doubts that this prime minister exerts unprecedented control over who says what. However, even given the manipulative side of Harper, the playwright — to some extent — gives him his due. Harper’s passion for politics can’t be denied even if that enthusiasm is misguided in the minds of the many Canadians who don’t vote Conservative.

Proud is clever and funny and along the way, Healey actually manages to humanize the Right Honourable Stephen Harper without getting Wheeler to sit down at a piano and rock out. Well, rock out Harper-style.

Entertaining and satirical, Proud does the Firehall Arts Centre proud. Should be a winner for director Spencer and a must-see for the left-leaning.

Proud runs until April 26 at the Firehall Arts Centre. For tickets call 604-689-0926 or go to firehallartscentre.ca.

For more reviews, go to joledingham.ca