Theatre review: The Cripple of Inishmaan is more Irish than a boiled potato 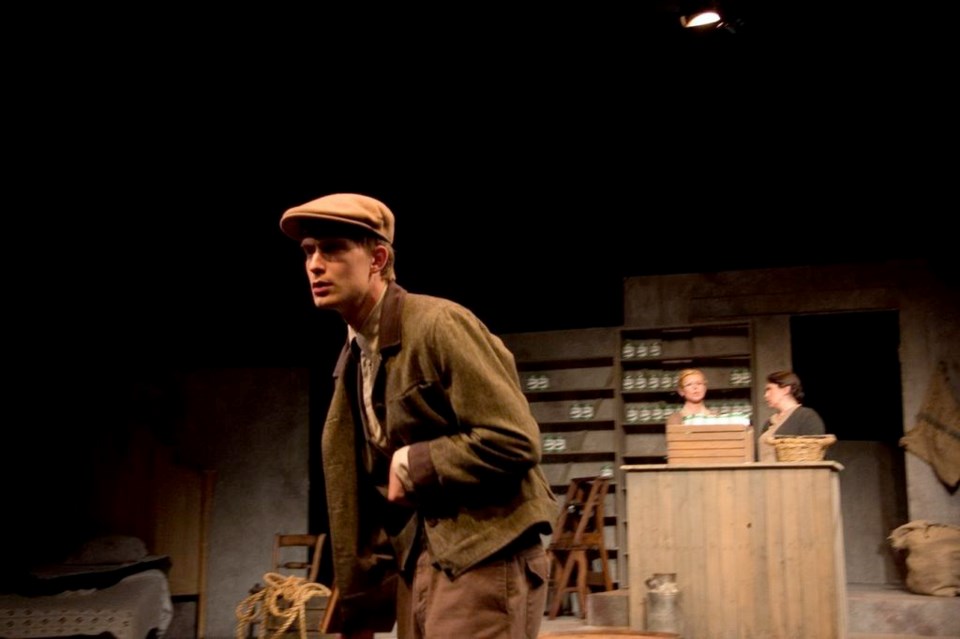 The Cripple of Inishmaan runs until Aug. 13 at the Jericho Arts Centre.

If I were Irish I would either hate The Cripple of Inishmaan because it feeds into so many clichés or I would love it because it feeds into so many clichés. There’s the long-suffering, slightly dotty old aunties; the town gossipmonger almost salivating over the feud between a couple of farmers over a goose and a cat; the feisty, red-pigtailed tomboy driving all the boys in the village mad with desire; the village idiot; and the village unfortunate — in this case, poor, orphaned Cripple Billy raised by spinster “pretend” aunties Kate and Eileen.

Playwright Martin McDonagh, born to Irish parents living in London, was raised in London and lives there but has made a career of these very Irish plays (including the Leenane Trilogy and the Aran Islands Trilogy). He’s said to be the one of the most important living Irish playwrights. Obviously, holidaying in Galway as a child made a huge and lasting impression.

There’s a delicious irony in The Cripple of Inishmaan; when Hollywood comes knocking in 1934 and wants to shoot Man of Aran, a “fill-um” on the nearby island of Inishimore, the Inishmaan locals scoff at the filmmakers’ stereotypical view of Ireland. Yet McDonagh deals in the same trade: quirky Irish charm.

But under the direction of Matthew Bissett it’s a great vehicle for actors. With the help of Ensemble Theatre Company voice coach Erin Ormond, dialect coach Brian Parkinson and taped music by the Pogues, it’s as close to paddy’s pig as it can be without actually being written or performed in the Emerald Isle.

John Bessette’s rustic set situates us in Kate and Eileen’s store where, inexplicably, there are only canned peas on the shelves and once in a while a basket of eggs. Alison Raine, looking prim with her hair yanked back into a tight little bun, is Auntie Kate. Rebecca Walters, with a permanent frown of disapproval, is Auntie Eileen. Together they have raised Billy -— always called Cripple Billy — after the death of his parents who may have “fallen overboard” in rough seas or, as nastily intimated by villagers, put stones in their pockets and jumped overboard “trying to get away from you.”

Sean Allan is Johnnyypateenmike, who earns a tin of peas and, if the gossip is juicy enough, an egg from Kate and Eileen when he comes spreading bad news. It’s a good, blustery role for Allan although, like the drunk that chews your ear off, Johnnypateenmike’s stories wear a bit thin after a while. And while we’re amused at his efforts to kill his old Mammy (Rosy Frier-Dryden) with poteen, you have to question whether it’s funny at all.

Stephanie Elgersma’s Helen is rough and tumble in a frock, sad cardigan and short boots. Elgersma is able to deliver a punch in the gut, spit out a wicked insult or smash an egg or two yet reveals the absolute frustration in this young woman who, without a miracle, will marry some thick-headed farmer, have a pack of kids and die young.

Max Wallace is Cripple Billy and you have to wonder how hard it is on the body to perform every few nights such a limping, crooked character. One foot is turned in causing Wallace to lurch awkwardly. Of all the characters, Crippled Billy is the least stereotypical and therefore the most interesting. Without a chance of ever being kissed by a girl -— “except a blind one” — claims one of the aunties, and not being physically capable of going to sea or making himself useful in Inishmaan, Cripple Billy’s future is grim until the filmmakers arrive and things start looking up. And then down.

Two and a half hours of Irish charm is a “biteen” too much, however, and for me it ran out about half an hour before the curtain fell.

The Cripple of Inishmaan runs until Aug. 13 at the Jericho Arts Centre. Tickets are $25, $20 for students. More reviews at joledingham.ca.