Vancouver actress goes to the dogs in Hudson & Rex 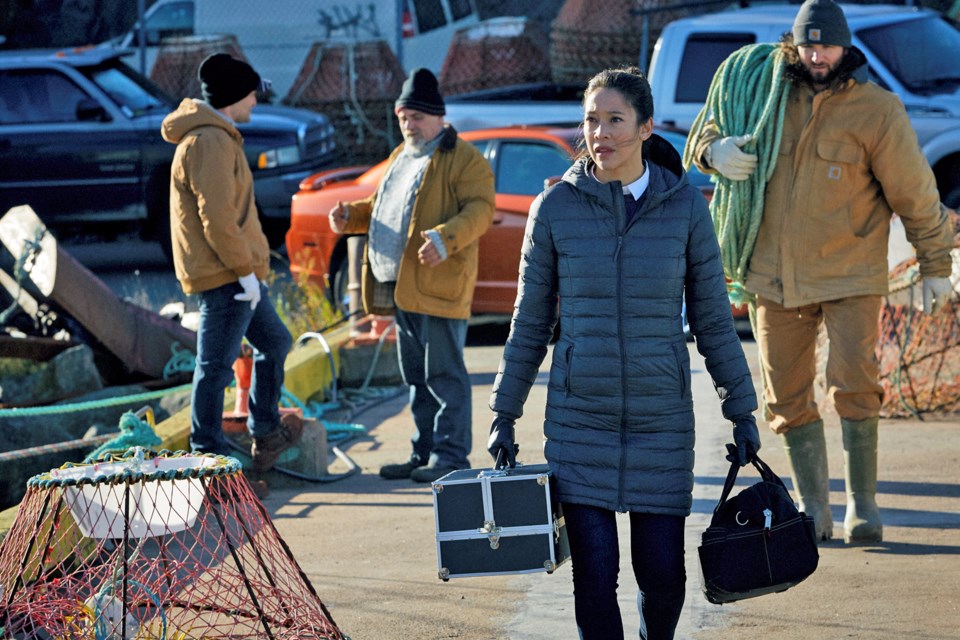 Mayko Nguyen likes one of her Hudson & Rex co-stars more than the others.

That alone isn’t so unusual. Actors are human beings; not all human beings get along with each other in the same way. But what is unusual is admitting that you prefer one of your co-stars to a journalist during an interview.

And the Vancouver actress is clear, and adamantly so: Diesel vom Burgimwald is her favourite co-worker, full stop.

This becomes less of a scandalous scoop and more of an adorable anecdote when you learn that vom Burgimwald is a two-year-old German shepherd who plays the titular Rex in Hudson & Rex, Citytv’s canine cop procedural that premieres on March 25.

“He’s a very special dog,” says Nguyen of vom Burgimwald. “He’s got this beautiful temperament. He’s a puppy, but he’s so — I want to say professional. It’s funny to apply that word to a dog, but he does have this professional air to him. Sometimes I forget that he’s a dog because he’s just one of us.”

It’s mid-February and Nguyen is calling in from St. John’s, Nfld., where she’s been filming Hudson & Rex’s 16-episode first season since October.

Hudson & Rexstars sometimes-Vancouverite John Reardon (Arctic Air) as Charlie Hudson, a St. John’s detective who partners with Rex when the dog’s original partner is killed. Hudson recognizes that Rex has a very particular set of skills — namely, he can sniff out details that are usually overlooked by human detectives — and together they solve all manner of crimes, with help from colleagues like Nguyen’s character, Dr. Sarah Truong.

Dr. Truong is head of forensics. “I’m a doctor, but what is really great on this show is I’m not stuck in a lab,” says Nguyen. “I’m on the scene a lot. I take an active role.”

Dr. Truong and Nguyen have a fair bit in common. Until recently, they’ve both been based in Toronto, and they’re both experiencing something of a culture shock in St. John’s. “It’s so cold here, and also really wet,” she laughs. “There’s no getting away from it. The wind is out of control. But it’s also majestic out here and quite beautiful.” She’s full of love for the people of Newfoundland, who she describes as “storytellers, with a sharp, caustic wit.”

Nguyen was born and raised in Vancouver and attended Eric Hamber secondary school. She was in Grade 11 when she caught the acting bug during a production of A Midsummer Night’s Dream.

“I don’t think prior to that I wanted to be an actor, but definitely that experience got me and I couldn’t imagine doing anything else,” says Nguyen.

Alas, when Nguyen told her father that she was intent on being an actor, he wasn’t too impressed.

“I come from a Vietnamese family and my dad, back then at least, would have preferred if I had been a doctor or a lawyer,” she says. “He was not into it at all. I think it just got to be that thing where he didn’t really have a choice. I clearly was not going to go to law school, but I’ve played a lawyer and I’ve played a doctor, so there you go, Dad!”

Nguyen’s lengthy list of credits includes fan favourite roles on Rookie Blue, But I’m Chris Jericho!, Cracked, ReGenesis and SyFy’s Killjoys. On Killjoys, Nguyen plays ruthless politician Delle Seyah Kendry, and she describes her as “not a character that I typically play. She’s not something that I think of myself as being close to in terms of character, and so there is something now where I’m like, ‘Oh, I think I need to investigate those kinds of roles a bit more because there was something there that caught me off guard.’”

Hudson & Rex represents a couple of firsts for Nguyen: her first time working with a dog and her first time relocating for work. “We had a shoot on a boat and I threw up when we were done,” she says.  “I’d never experienced the North Atlantic in that way and so much of the show is about being in St. John’s, and I think you’ll get that from the show. I’ve not met this landscape before. It’s a beautiful place and so unique in Canada.”