Actors of colour take their place in iconic film scenes in Sandra Oh, Inspiration
May 15, 2019 9:33 AM By: Sabrina Furminger 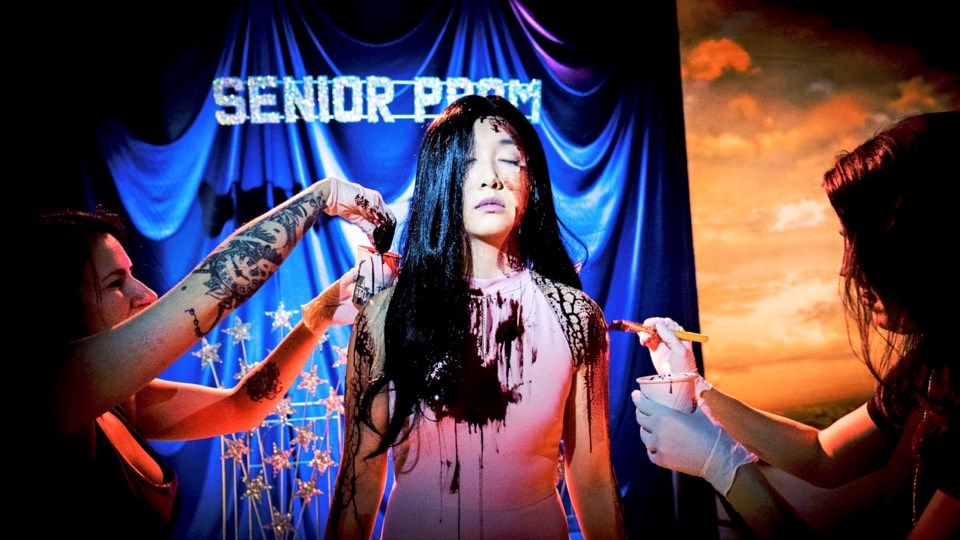 They are some of the most iconic images in the history of film: Scarlett O’Hara, standing tall and dirty in the middle of a field, vowing to God that she will never go hungry again. Alex and his fellow droogs on a couch in the Korova Milk Bar, drug-laced beverages in hand. Carrie the blood-covered prom queen. Princess Leia, blaster in hand, peeking out from behind a corner and revealing herself to be the face of courage in a galaxy far, far away.

These moments and characters have become part of pop culture, and in every instance, the actors featured in these history making scenes were white. But now, we can see what these iconic films look and feel like when people from marginalized communities are given the opportunity to inhabit them, and we have Sandra Oh to thank for this opportunity.

It was during Oh’s opening monologue that she uttered the words that set social media ablaze: “I said yes to the fear of being on this stage tonight because I wanted to be here to look out into this audience and witness this moment of change,” she said. “Because I see you, and I see you — all these faces of change. And now, so will everyone else.”

The four-minute film was written and directed by Lam and produced by the National Film Board of Canada. It features actors from traditionally marginalized communities — Simon Chin, Dejan Loyola, Elfina Luk, Jaymee Mak, Ingrid Nilson, Valerie Tian and Mayumi Yoshida — speaking about the influence that Oh’s work has had on their careers, and then inhabiting roles in live action tableaus inspired by A Clockwork Orange, Carrie, Gone With the Wind and Star Wars: A New Hope.

Sandra Oh, Inspirationhad its world premiere on April 27 at the 2019 Governor General’s Performing Arts Awards Gala in Ottawa, where Oh received the National Arts Centre Award. Every winner was honoured with a tribute film, and while the other films (honouring esteemed Canadians such as Colm Feore and Rick Mercer) were fairly straightforward montage- and interview-driven shorts, Lam said that Oh told the NFB that she was open to something different.

“She told the NFB that I had free rein to make this film for her, and she saw it as a gift,” says Lam. “She took her power and made space for me to be able to do whatever I wanted to do.”

Sandra Oh, Inspirationrepresents something of a departure for Lam. The Vancouver filmmaker typically makes horror films, such as Evangeline, which opened the 2014 Vancouver International Women in Film Festival, and the upcoming The Curse of Willow Song, which will bring the real-life horror show that’s the Vancouver housing crisis into the horror genre.

“I haven’t actually worked with Sandra before, and because my films tend to be genre and horror, I thought it was a peculiar match, but the more I thought about it and did research on her and delved into her work and her interviews, it resonated,” says Lam. “I think cultural identity and representation on screen hasn’t been a huge push in my own creative process until more recently when I realized that, if I didn’t say it, then who would — and for me, it’s, ‘How do I do this from a genre lens?’”

Lam drew inspiration from Oh’s Golden Globes speech. “When she said, ‘I see you,’ this is what we were playing with as the underlying thread through the whole process,” says Lam. “The film was meant for her and everything she’s advocating for in the industry.”

Lam didn’t have the opportunity to speak with Oh that night in Ottawa, but the very next day, she received some feedback in what she describes as “the most Canadiana moment ever” — from Rick Mercer in the airport lounge.

“I went over to introduce myself and he said, ‘Sandra loved the film, she was cheering and crying at the end,’ and I thought to myself, ‘I just heard this from Rick Mercer, this is so weird!’”